Language: Dutch
Berlin 9.11.1989 - the Wall Loses its Relevance
Telegram (T) • confidential
Report on the events that unfolded on and after 9.11.1989. Van der Tas is critical of the "false note", the claim for reunification, brought into the festivities by FRG Chancellor Kohl.
How to cite: Copy

When the Wall Came Down. The Perception of German Reunification in International Diplomatic Documents 1989–1990 (Quaderni di Dodis 12), vol. 12, doc. 15

“Ab sofort” was the answer of the SED Politburo member responsible for information, Schabowski5, after the meeting of the Central Committee on the 9th on the question when the arrangement for travel to the Federal Republic and West Berlin that he had just made public would enter into force. A directive that he presumed was already known to the assembled press, but which he himself clearly did not know intimately. The border guards were also unprepared, but confronted by the inflowing masses they threw open the gates at the Borholmer Strasse crossing, stepped back and let the flow of people pass by. Shortly afterwards the other border crossings followed including Checkpoint Charlie. The Wall had – in the words of governing mayor Momper6 – lost its relevance. On 9 November 1989, this inhuman and monstrous edifice that was founded on 13 August 1961 fell. The cornered leadership of the collapsing “First State of Workers and Farmers on German Soil”7 had risked the desperate flight forward to stem the bloodletting of “Republikflucht”8 and regain the trust of the population.

In Berlin (West) this “Day of Re-Encounter”9 (Momper) led to an emotionally charged cheerfully chaotic exuberant weekend in which nearly two million people from the Eastern Sector and all parts of the GDR flowed into the city. Many with tears in their eyes, hand in hand, elderly, young people, families with children, toddlers and babies (one was even born here), they came in their small two-stroke cars or on foot in a ceaseless flow of people. Some came to reunite with relatives, others for a specific purpose “having my car repaired and taking a beer” – as one of them told me – to shop, but most of them came to establish in person that the incredible had become true and see the forbidden land. Only a few, about 5000, mostly immediate family members of previous refugees, decided to stay. This incredible coming and going led to enormous traffic chaos both in the East at the few border crossings, where most left their cars to cross on foot, and in the West, where the public transport system could barely handle the flow, despite deploying all available resources. The GDR quickly opened new crossings, one of them located on the historically significant Potsdammer Platz in the middle of the “Todesstreifen”10 on the 12th. In about three hours’ time, some 15,000 flower bouquets from the Netherlands were handed out to welcome those from the East at the initiative of the flower trade fair Aalsmeer. It was a gesture witnessed by Federal President Weizsäcker11 and governing mayor Momper.

The western part of the city responded openly, warmly and enthusiastically. The first people to arrive were showered with champagne and many were welcomed as guests in the house. Special arrangements for the quick payment of the so-called “Begrüssungsgeld” (DM 100 per year per person), special offers of coveted goods in stores (sometimes acceptance of parity between the DM and GDR currency), free concerts and performances, etc. etc. The event, however, focused on the Kurfürstendamm, where visitors flocked to witness the big unknown of capitalist consumption economics with their own eyes. Here a true people’s party of fraternization developed. Striking was the festive but very disciplined and controlled atmosphere.

Below are some points of special significance:

A false note was introduced into the festivities by the politicians, namely the CDU and Federal Chancellor Kohl12, who could not refrain from emphasizing this theme. This was expressed on the one hand in a sharp disagreement at the Special Session of the Berlin House of Deputies on 10 November in the presence of the Federal Chancellor and the SPD honorary chairman Brandt13 and Minister Genscher14 when the CDU and the SPD (the latter under pressure from their coalition partner the AL) could not agree to the text of a joint statement (text by telex). SPD/AL could not go beyond “The House of Representatives of Berlin firmly adheres to the goal of working towards a state of peace and the unity of Europe, in which the German people are also free to determine their coexistence, on which it decides by exercising its right of self-determination”15. While the CDU insisted on the words “can achieve its unity”16 instead of the phrase in italics. Therefore the final text was adopted with only the votes of the SPD/AL.

It was painful that the Chancellor was afterwards whistled at by many of the thousands who were present, but a significant indication of the prevailing mood was that in his speech he later reproached ruling mayor Momper as having spoken of “the people of the GDR”, which led to a sharp exchange of words.

The appeal made by the Berlin CDU leader Diepgen17, who also called for the GDR to break down the Wall and open the Brandenburg Gate was a false note.

The visitors and the West Berlin population, did not appear to support this theme. For them it was a meeting, an association and a rediscovery. The rest could wait.

The only incident of significance occurred on this historic spot. A clear separation here is symbolic for both the political and international legal identity of the GDR. The GDR decision is limited to the broadening of the travel options for its own citizens to the Federal Republic and Berlin (West) and possibly other states. The national border of the independent nation of the GDR will therefore remain unaffected. Attempts by Berlin’s youths to pull down segments of the Wall and occupy the outer Wall at the Brandenburg Gate in the evening hours of 10 November were, from this perspective, border crossings. The GDR responded very cautiously and in a controlled manner. The water cannon gave the young people wet suits but was effective and afterwards posting a detachment of unarmed border troops on the Wall sufficed.

An agreement with the West Berlin police that included a promise that it would counter further disturbances made even this redundant.

The situation that arose as a result of the GDR decree forced the government and public services of both districts to contact and cooperation that was unheard of and which ran counter to many existing regulations. Most characteristic was the joint inauguration of the Potsdamer Platz crossing by reigning mayor Momper and Oberbürgermeister Krack18 on the morning of 12 November. In their official capacities, they had never previously had any contact with each other. Afterwards, Federal President von Weizsäcker had a conversation with GDR border troops on GDR territory.

The nature of the discussion was pragmatic, the goal an undisturbed and smooth flow of visitor traffic. From the GDR side, breaches were made, stations opened and the West Berlin police, fire brigade and public transport took care of the removal of watchtowers, traffic safety and lines and public transport from the new crossings (sometimes even on GDR territory where for example a West Berlin bus service was extended to Potsdam). An emergency telephone connection between the two police headquarters and contact at the highest level has now become a fact while on the work floor at the crossings the GDR border soldier and the West Berlin policeman stand side by side, beaming enthusiastically.

The euphoria will soon fade and then the question will arise how to proceed. From the GDR side the assurance has now been given that all this will not be reversed or adjusted in a limiting sense of the word. However, things, in particular the “non-bureaucratic” conduct of affairs, will have to be replaced by a more regular settlement. This means a continuous flow of visitors who will come to do their shopping here and maybe find employment.

More serious is the danger of illegal exports of scarce GDR consumer goods for illegal trade in Berlin (West). Since a cross-country skiing boot is available over there for 49 GDR mark and the unofficial exchange rate is 1 DM for 10 GDR marks (official parity) this will speak for itself. The ominous word monetary reform, to prevent the “Clearance sale of the GDR”19 has already been used over there and seems to be a compelling first step towards economic sanitation. Meanwhile interim arrangements and agreements will be required. Here too, intensive cooperation between Senate and GDR authorities will be necessary.

Given that it is not to be expected that the GDR state and (party) leadership will accept that the Soviets will resume their formal role as occupying forces, and in fact the Soviet Union will certainly not be willing to do so, the Allies are now facing a more difficult reconsideration. In some respects they have been passed on the left hand side by developments and can do little else than accept that they too are spectators at events in which they play no role. The situation at Check Point Charlie during the weekend was significant. Between the crowd of West Berliners who rejoiced in welcoming their East German countrymen and fellow city inhabitants, an American, a French and a British military policeman appeared lost in observing the formalities of painstakingly checking returning compatriots (military or civil).

8
Republikflucht: the act of fleeing from the GDR (culpable under GDR legislation).↩

10
Todesstreifen: the Death Perimeter (on the Eastern side of the Wall).↩ 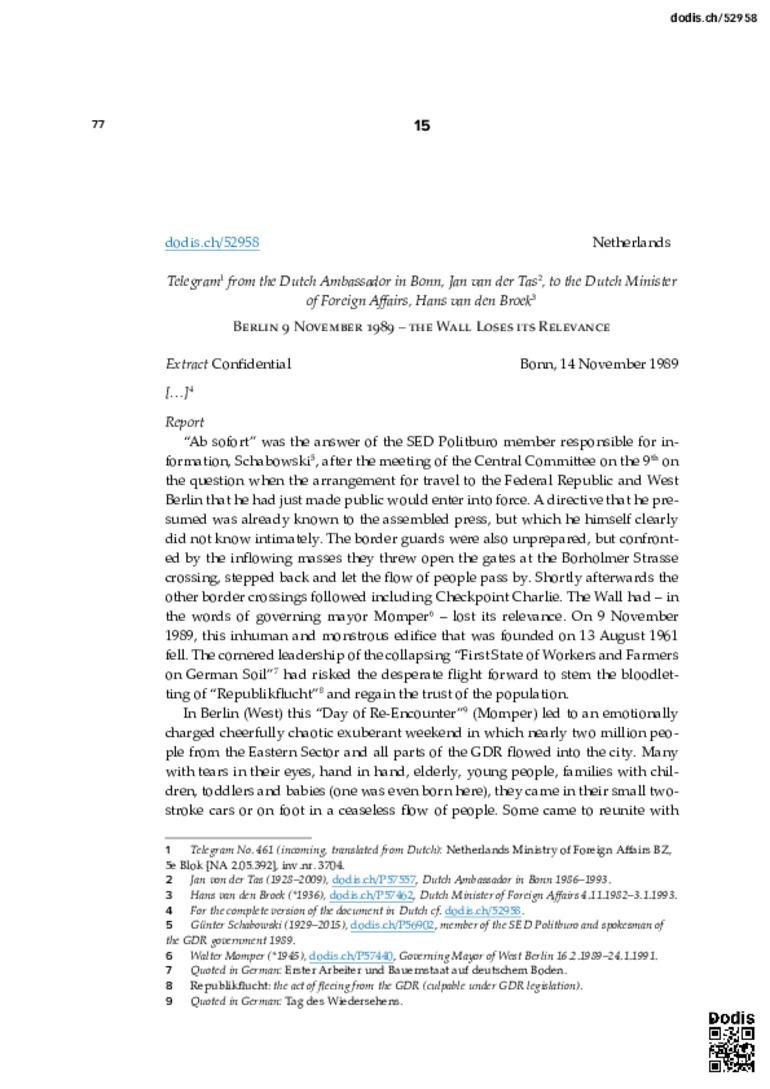 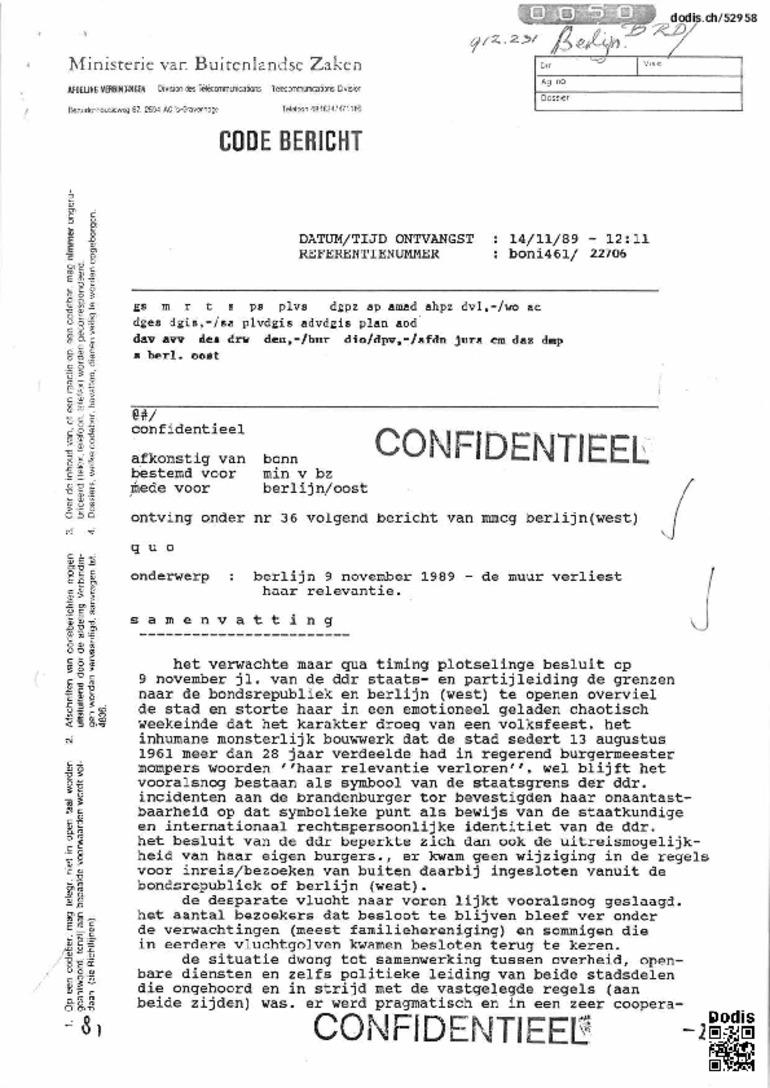 Persistent URL of this document: http://dodis.ch/52958