Language: Hebrew
GDR-FRG-Israel. Following our Telegram No. 73 of 12.4.
Telegram (T) • secret
Review of the situation in the GDR following the elections. The new parliament has passed a resolution recognizing Germany's crimes against the Jews and instructing the government to work for establishment of relations with Israel. Open official negotiations with the GDR are proposed.
How to cite: Copy

When the Wall Came Down. The Perception of German Reunification in International Diplomatic Documents 1989–1990 (Quaderni di Dodis 12), vol. 12, doc. 45

dodis.ch/52946 Telegram1 from the Israeli Ambassador in Bonn, Benjamin Navon2, to the Israeli Foreign Ministry

A) For the first time a coalition government has been formed in East Germany which was elected by democratic process. The coalition agreement sets the following goals:

1. Ensuring prosperity and social equality for all citizens of the GDR.

2. Freedom and justice for all.

3. Realizing in a speedy and responsible way the reunification of Germany after negotiations with the FRG on the basis of Article 23 of the Constitution (of the FRG). This will be a contribution to the “peaceful settlement” of Europe.

B) In the opening meeting of the new East German parliament (Volkskammer), a resolution was unanimously adopted which says:

… It was Germans who during the period of national socialism inflicted immeasurable suffering on the peoples of the world. Nationalism and racial madness led to genocide, particularly among Jews from all European countries, among the peoples of the Soviet Union, the Polish people and the Sinti and Roma [the Gypsy people] ….We ask the Jews all over the world for their forgiveness. We ask the people in Israel to forgive us for the hypocrisy and hostility shown in official GDR policy towards the State of Israel, and to forgive the persecution and degradation of Jewish compatriots in our country, also after 1945…. [The new government must act to establish] We declare that we will strive for [the establishment of] diplomatic relations with the State of Israel4.

C) Paragraphs A and B give expression to the subjects which interest us:

1. The temporary existence of the GDR, which will pass through most or all of the stage of union with the FRG within one to three years.

2. The GDR’s confrontation with its past and request for forgiveness and pardon from the Jewish people and the State of Israel.

3. Expression of a wish to establish diplomatic relations with the State of Israel.

To this we must add the unambiguous FRG aspect, which is that the President5, the Chancellor6 and Foreign Minister Genscher7 have encouraged and approved the idea that we should establish diplomatic relations with the GDR. The Israeli aspect is also quite unambiguous. East Germany has fulfilled our conditions (which we never defined as such) for opening negotiations on establishing relations.

Things had already begun to move during Hans Modrow’s8 term as prime minister (both in his letter [to Yitzhak Shamir] and the statements made to Michael Shiloh9 in the Copenhagen talks) and received official status in the resolution of the East German Volkskammer quoted above.

The question may be asked why establish relations at all with a German state which will disappear in the foreseeable future. To this I suggest four replies:

1. Our support in principle for universal relations between states.

2. The GDR’s fulfillment of our “conditions”.

4. In our negotiations with the GDR, we must tactfully and with restraint make a case for our demands from that state, in the knowledge that the burden of answering those demands will fall mainly on the FRG.

D) We no longer have any reason to play the game of the SED – the game of Honecker10 and Oskar Fischer11. Bonn is no longer in the eyes of the East German government of de Maizière12 and Markus Meckel13 “the capital of the revanchists”, where everything is bad. On the contrary, Bonn is the capital of the state which the GDR will join according to Article 23, in the foreseeable future. We should not, therefore, continue with the anachronism of showing consideration for the outdated SED ideology, consideration which may definitely be seen in the FRG as attempting – even if only symbolically – to continue the division of Germany.

In the light of all the above, I propose a decision on opening negotiations to establish relations between us and East Germany, on the lines that have been mentioned. The site of the talks should be Bonn. I have no doubt that the GDR government will accept this and the FRG government will approve. The symbolism will be clear. I would be grateful to be appointed as the head of the delegation for the negotiations14. Since we will establish relations with a state which has adopted as its slogan its temporary status and the end of its existence by means of a merger with West Germany, it is appropriate that our relations with it should reflect this situation. My status as non-resident Ambassador in East Germany will certainly be welcomed in Bonn and East Berlin.

4
See the English translation of the declaration in Israel State Archives, P 4731/2. Navon’s translation into Hebrew, given in square brackets, is slightly different from the original.↩

9
Michael Shiloh (*1934), dodis.ch/P57526, Adviser on Diaspora affairs in the Israeli Foreign Ministry and Israel’s representative at the talks with the GDR in Copenhagen.↩

14
This sentence and the last one are underlined.↩ 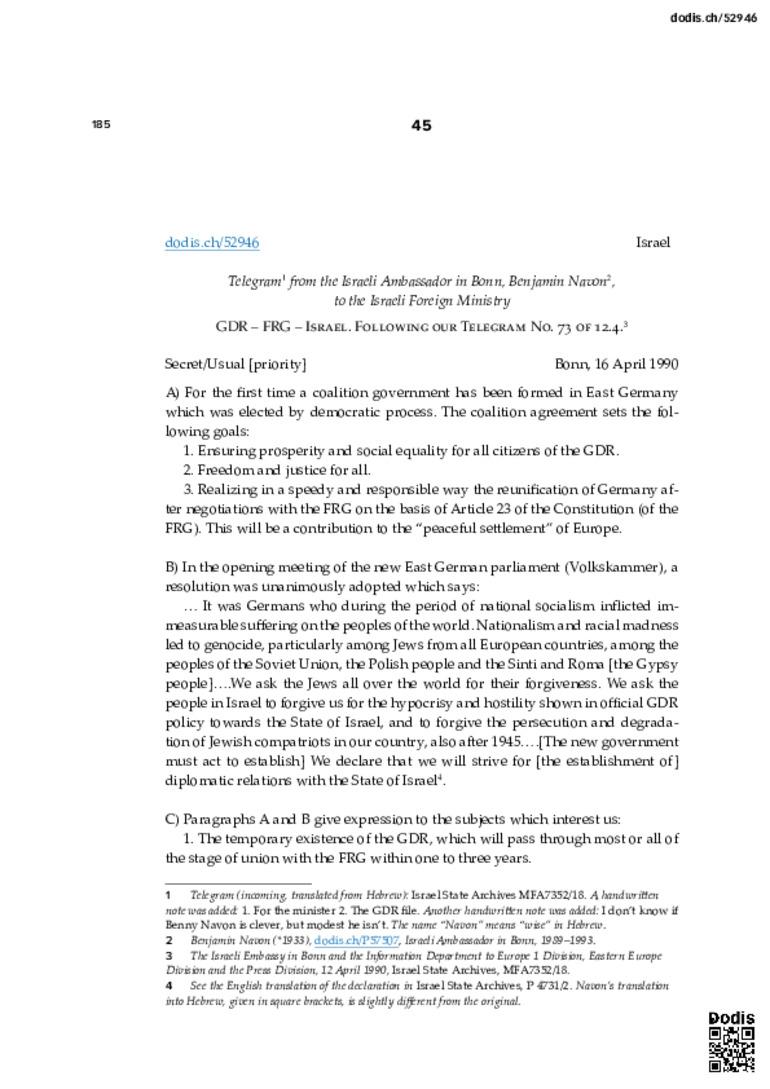 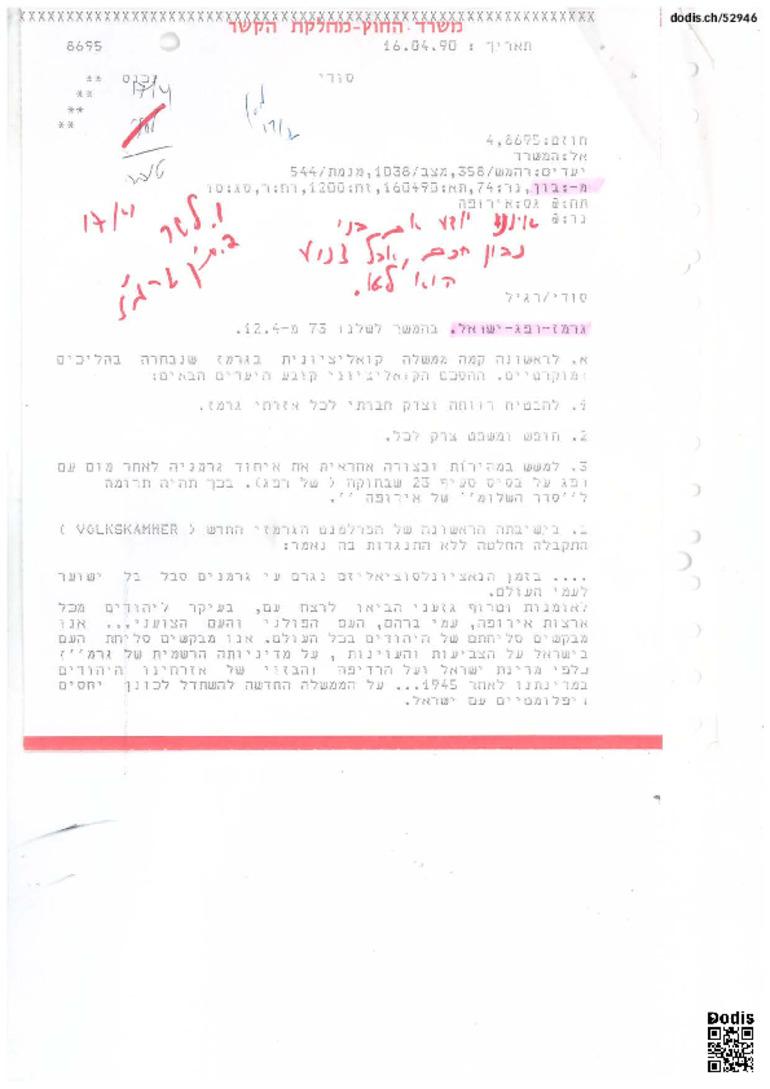 Persistent URL of this document: http://dodis.ch/52946