Language: Hebrew
Summary of the Minister's Visit
Telegram (T) • urgent and secret
A report on Foreign Minister Arens' talks in Bonn with Chancellor Kohl and President von Weizsäcker. Arens told the latter that he sees the reunification of Germany as "a foregone conclusion". Kohl said that East Germany was rapidly collapsing, and assured Arens that "there is no Fourth Reich, and never will be."
How to cite: Copy

When the Wall Came Down. The Perception of German Reunification in International Diplomatic Documents 1989–1990 (Quaderni di Dodis 12), vol. 12, doc. 39

dodis.ch/52945 Telegram1 from the Israeli Ambassador in Bonn, Benjamin Navon2, to the Israeli Foreign Ministry

Summary of the Foreign Minister’s3 Visit to Bonn

During his visit the Foreign Minister had three working meetings:

Breakfast with his colleague, Genscher4

A meeting with the President of the FRG, von Weizsäcker5

A meeting with Chancellor Kohl6.

3 subjects ran through the meetings like a scarlet thread.

A) Our attitude to the reunification of Germany.

B) The sanctions of the Commission7

C) A report on our contacts with the GDR

1. Michael Shiloh has reported at length on the breakfast with Genscher8. We would add that Genscher’s office asked us to refrain from publishing Genscher’s support for continuing our contacts on establishing relations with the GDR.

2. The conversation with the President.

The Foreign Minister opened by passing on greetings from President Herzog9 and expressing his hopes to welcome von Weizsäcker in Israel soon.

He said that he sees the reunification of Germany as “a foregone conclusion”10. He has faith in the institutions and the democratic tradition of the FRG. He sees the extension of this tradition to the GDR as a positive development. Israelis and Jews speak, for understandable reasons, of the past, but obviously it is necessary to look towards the future.

The President thanked Foreign Minister Arens for his words about reunification and added that there is no way to foretell when it will happen.

The President thinks it is necessary not only to carry out the formal process with the Four Powers, but also to give Germany’s neighbours a feeling of confidence in a united Germany. He sees giving this feeling as a kind of unofficial legitimacy. As an aim he quotes Politburo member Yakovlev11, who said that the aim should be not a German Europe but a European Germany.

The President spoke emphatically about the Eastern border, and said that on this point Germany would leave no room for further doubt.

He went on to dismiss the concept of “Fortress Europe”. He mentioned that the USSR was the last colonialist empire.

The President spoke of the need to hold negotiations with parties and organizations with which one does not agree, and said that the Palestinians must be helped to overcome their past mistakes. In reply the Foreign Minister compared the attitude towards the refugees in the Arab world, to that in other parts of the world while giving the concrete example of how Europe would look if the Sudeten refugees were still being held in camps along the border.

The President said that he would visit Czechoslovakia on 15.3., the anniversary of the entry of the German army into Czechoslovakia. He asked us not to publish this until it was made public in both capitals.

The whole conversation lasted over an hour although only 45 minutes had been allotted. It was exceptionally marked by a most sympathetic atmosphere.

3. The conversation with the Chancellor.

The conversation, which was fixed for the day of the Chancellor’s announcement on East Germany in the Bundestag, a meeting with the prime ministers of the states and/or with Mitterand12 in the Elysée palace, was originally allotted 15 minutes. Nevertheless, it lasted over half an hour, in a positive atmosphere. The Chancellor apologized for having so little time that day and added that he could not “resist the charms of the Ambassador” despite the lack of time. The Foreign Minister started by sending greetings from the Prime Minister13 and expressing the hope that their exchange of letters had not left any bitter aftertaste. The Chancellor said that the problem for him was non-existent.

The Foreign Minister said that he has faith in the democracy of the FRG and the extension of that democratic tradition to the GDR is desirable and a good thing. The Foreign Minister reported on his conversations with Genscher and gave details about our contacts with the GDR. He said that the East Germans had informed us that they wanted to establish diplomatic relations. We had presented a number of prior conditions.

The Foreign Minister mentioned Modrow’s14 announcement and said that we are asking ourselves, in view of the approaching reunification, if there is any point in continuing contacts with the GDR. He added that Genscher supported these contacts and the establishment of relations with the GDR. Kohl replied to this that he shared Genscher’s stand but qualified this by recommending that it should not be done for the next 4 weeks (that is, until the elections in the GDR). After this, Kohl spoke at length about developments in the GDR. He said that although he had not had much belief in the stability of the regime, he did not expect such a rapid collapse. He mentioned his 10 point plan which had 3 stages. He had thought then of elections in the GDR within a year. In fact the first two stages (that is, the treaty relationship and confederation) have already been consigned to oblivion. He mentioned that there are already firms in the GDR today doing their accounts in (West) German marks. There are parts of the GDR which are breaking away from the crumbling central government. In one district the president decided to open all the borders and to declare all the Christian festivals as district holidays. A considerable number of the leaders and the mayors are in prison or under investigation. Policemen do not turn up for work since they do not want to be seen in uniform.

Kohl mentioned that a citizen of the GDR must be at least 79 in order to remember what free elections are like.

With reference to the members of the Round Table, he said that they are idealists without any experience. He described Modrow himself as an honest man and said that he is aware that his days in power are numbered and will end on 18 March. He spoke sarcastically of the retirement terms offered to party functionaries and so on, who have been promised that they will receive their salary for the next two years. Kohl said that it is as if the Gestapo members had received their salary for two years from 1945 on.

He then spoke of the question of monetary union and the GDR’s demand for 16 billion marks – a sum that will last, in his opinion, for two weeks. According to Kohl there are 200 companies in the FRG which are ready to start economic activity immediately in the GDR, if they are given suitable collateral for their investment. He mentioned that three nuclear reactors in East Germany are “in a worse state than Chernobyl”. Despite all this, Kohl is optimistic, since the GDR is situated in the traditional industrial area of Germany. Later he spoke briefly about the fears of their neighbours on the subject of the two [military] alliances and the presence of 380 thousand Russian troops in East Germany. He said that he had told Gorbachev15 that if there was a clash in the GDR between demonstrators and the soldiers – that would be the end of perestroika. Kohl sees a united Germany as a factor stabilizing the peace between Eastern and Western Europe.

There is no Fourth Reich and there never will be. The new Germany has a new axis. The Versailles settlement was a historical error, but the errors of that time were not repeated. The economic axis is in the south-west, and the Rhine is the decisive river in Germany. We all have an interest in Gorbachev’s success and in his remaining in office. If it were not for the developments in Germany, there would be no reform in Hungary and Czechoslovakia.

Towards the end of the conversation Foreign Minister Arens told Kohl that he had mentioned the sanctions in his talk with Genscher and with President von Weizsäcker. He said that Genscher had promised to act, Kohl said definitely that he opposes sanctions and in this context mentioned his stand, together with the British Prime Minister16, against sanctions on South Africa.

The Chancellor asked us to keep him up to date on this issue.

7
In January 1990 a proposal by the European Parliament to break off scientific ties with Israel because of its policies in the Occupied Territories was presented to the European Commission. Israel feared further sanctions.↩

10
English in the original.↩ 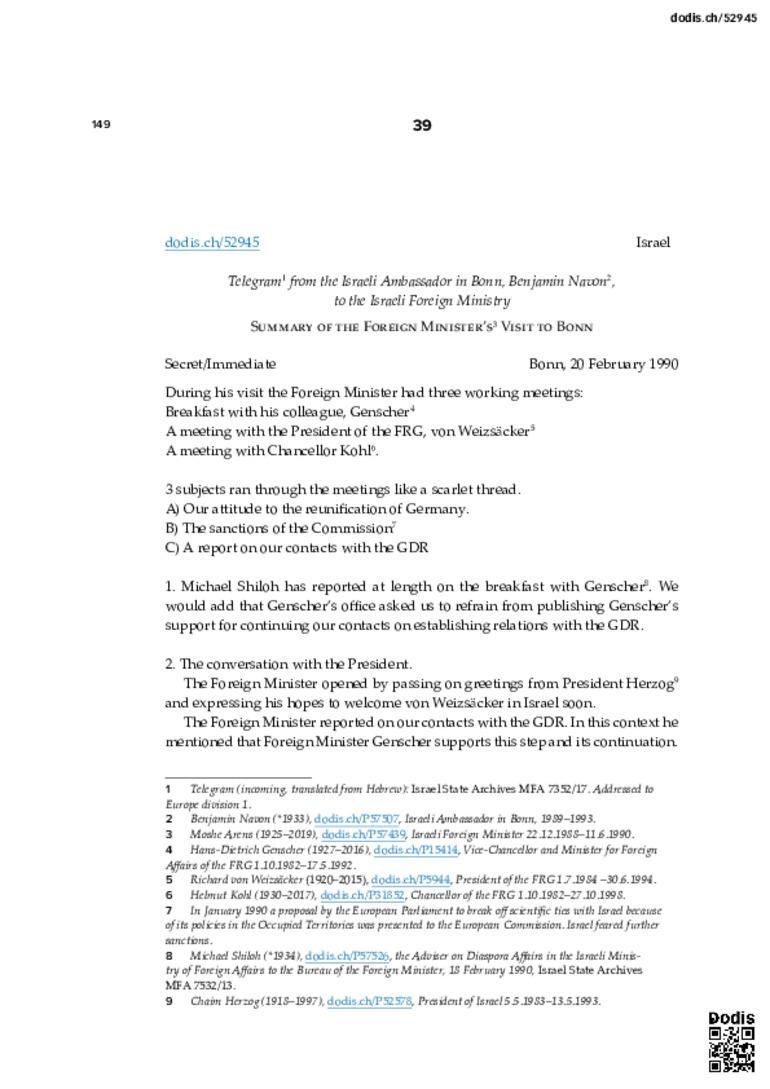 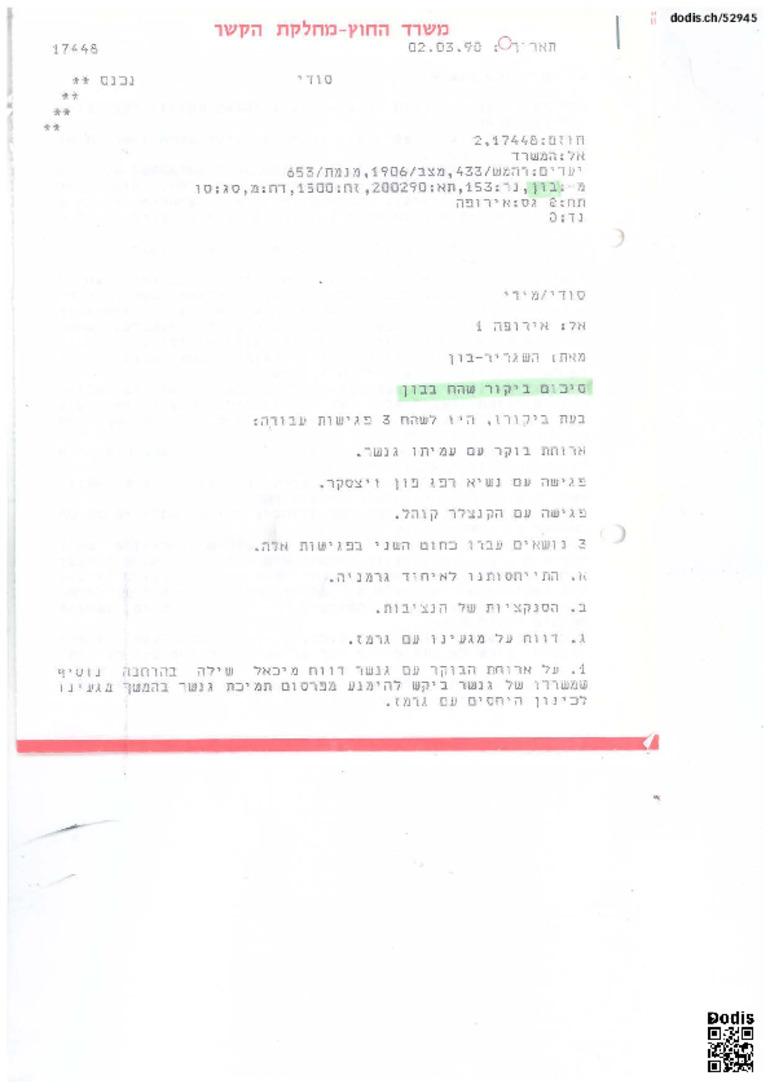 Persistent URL of this document: http://dodis.ch/52945