Language: English
No. ZQGR1429. Germany: The Summer of 1990
Telegram (T) • confidential
Speculative reflections on the fall of the Berlin Wall, the reunification of Germany, and what it means for Europe and the world.
How to cite: Copy

When the Wall Came Down. The Perception of German Reunification in International Diplomatic Documents 1989–1990 (Quaderni di Dodis 12), vol. 12, doc. 58

dodis.ch/52941 Telegram1 from the Canadian Ambassador in Bonn, Thomas W. Delworth2 , to the Canadian Department of External Affairs

Summary: an unbelievable summer continues to contribute to an improbable year. Last week’s Soviet concession that united German membership in NATO was now acceptable and the Two-Plus-Four agreement in Paris on Polish western borders have effectively removed the final international barriers to German reunification. The devil, to adapt an old German adage, may reside in the remaining details, but at the moment at least there is confidence on all sides that they will be overcome, and on schedule. It is, however, already clear that the impact on Europe of its reunited centre will be profound. Still to be gauged is the precise nature of this impact. The presence of a united Germany – and the momentous change that gave rise to it – will affect virtually all aspects of the way in which Canada and Canadians have thought not only about Europe but also about the transatlantic relationship. A reunited Germany could well necessitate the readjustment of some of the fundamental assumptions in Canadian foreign policy, including our views of the role of the alliance, and our place in East/West relations.

2. Report: in retrospect it is clear that Soviet intentions behind the chain of events that led to the breach of the Wall on 9 November 1989 were foreshadowed in the joint Soviet/FRG declaration of 13 June of that year. In it, Gorbachev endorsed the principle of national self-determination, thus effectively burying the Brezhnev doctrine of limited sovereignty and of the irreversibility of Communism. At the time, German officials who had worked on the declaration were jubilant, but few others took its implications to heart. By November, the SED ideologist, Otto Reinhold3, was saying on West German television that a GDR without socialism would lose its legitimacy. The end of Honecker4 by the turn of the year, and the reduction of the SED in the spring elections to a splinter party proved his point: the GDR had voted to abolish itself. What happened between then and now looks like the working out of some sort of inexorable logic of history, but there was also virtually unbelievable German good luck, combined with political courage and determination not only on Gorbachev’s5 part but also by East Europeans. Among the latter were members of the then Hungarian government who in the autumn of 1989 took the brave decision to break their treaty commitments with their East German partners by permitting GDR refugees in Hungary to flow west, knowing full well that such a decision was crossing a Communist Rubicon, and would create a crisis within the Eastern Bloc from which recovery was unlikely.

3. So greatly have times changed at this point that Chancellor Kohl6 went to Moscow last week, returning with Soviet agreement on a united Germany in NATO. This agreement is more striking because it was reached independent of any visible, direct relationship to the Two-Plus-Four process, and removed in detail from anything but the broadest NATO imprimatur (so far as we know there was no prior NATO consultation on the reduction of German troop levels offered by Kohl, or on the agreement that the 380,000 Soviet troops leave Germany no later than 1994). A strong USA profile in this deal was, moreover, noticeable by its absence: the Bush7 administration had already accepted that Germany would go its own way on economic support to the East, whatever decisions were or were not taken at the Houston Summit. This laissez-faire approach on the mechanics of German unification seems generally shared by other allies, the Ridley8 affair notwithstanding.

4. This is a great Western victory: removing the Iron Curtain from Central Europe and opening the way to the final achievement of the goals we set for ourselves at the beginning of the CSCE process in the 1970s, this is the much-to-be-welcomed culmination of a remarkable team effort, despite occasional doubts, hiccups and false starts. According to Foreign Minister Shevardnadze9, the London NATO Summit, in transforming the purpose of the alliance, prepared the way for Soviet agreement on a united Germany in NATO. On 19 November, everything will culminate at the Paris CSCE meeting when German union will be recognized (presumably in a declaration) by all participating states and where new security structures under CSCE auspices will be established at the same time as CFE I concludes and the final agreement on the elimination of Four Power rights in Germany is reached. A breathtaking agenda for a single relatively brief meeting.

5. The original deal at Potsdam looking to a democratic Europe is thus being implemented after a delay of some 40 years. German reunification and its concomitant twin, the revolution in Eastern Europe, have drastically changed what the Russians used to call the correlation of forces in Central Europe. With German union, the Western European political and economic equilibrium at least symbolically shifts its centre of gravity away from the Rhine towards the Elbe. Despite various studies that we and our allies have undertaken, the shape of such a transformed Europe is barely visible; many studies have focussed on the processes of German union, implications for NATO etc., but few on the facts, as rearranged, following union. These latter are virtually upon us. First among them is that the West German identity assumed by the FRG which virtually everyone has taken as a given, will perforce begin its disappearance the day a united Germany is proclaimed. A reunited Germany will be much greater than the sum of its parts, the FRG plus the GDR plus Berlin. But what in fact will it be?

6. The Federal German Republic had already emerged as the Western European primus inter pares, and with de facto Soviet withdrawal in the East, a united Germany will become the predominant power in an area which Germans (and their Austrian cousins) have historically contested with the Russians. Here, the paradox is that as the FRG emerged as the dominant economic power in Europe it remained only a quasi-sovereign country, militarily limited in many respects by the terms of various NATO agreements, and by a kind of political self-censorship in its dealings with both East and West, particularly on security issues. With the imminent emergence of a fully sovereign, united Germany (with of course, one or two transitional arrangements) this era is virtually at an end.

7. Obviously, the effects of German union on the allied military presence in the FRG will be direct and immediate, with long-term implications for force levels and structures. As Soviet withdrawals in the East continue, a vacuum could well be created, generating a host of other security problems which CSCE mechanisms now under negotiation are designed to address: in theory, the old East/West security structures will be replaced by an institutional role for the CSCE, inter- and intra-alliance cooperation and non-aggression treaties with the USSR and Poland. This may well be a promising beginning but it is unlikely to be the end of the story. Whatever role CSCE mechanisms may eventually play, the reassertion of German economic power and political influence in Eastern Europe is a process already begun. Unification will intensify this process as Germany becomes primus inter pares in Central Europe as well. The Maoist dictum that political power grows out of the barrel of a gun has been disproved by German bankers, and mere possession of nuclear weapons by the UK and France as a means for wielding political influence has proven no match for the Deutsche Mark.

8. Chancellor Kohl has sought to play down the significance of the profound changes now underway, speaking of a united Germany as the “rational centre of Europe” and of the German ability to act as a clearing house of ideas between Western and Eastern Europe. For some time yet, a united Germany will indeed be preoccupied with internal matters. There are dislocations in the GDR created by the onset of capitalism – its aggressive West German variety has so far been underplayed by the FRG coalition, but already the effects on GDR agriculture and industry have been profound. The complexity of the issues involved in the new Germany’s European vocation are miniaturized in the debate over whether the capital of a united Germany should be Berlin. De Maiziere10 has unwisely made this a pre-condition for union, and President von Weizsäcker11 (for unknown reasons) has also entered an intensely political debate on the side of Berlin. There is thus revealed a second debate about whether Germany should now turn to the East as much as it had turned to the West. With big metropolitan Berlin – a major European city by any standards – the vision of an Eastern empire comes virtually to mind. For many Germans, to opt for Berlin is to opt for an eastern “empire”, an eastern economic hinterland. This is feared as much by many Germans as it is by others.

9. In the rush of events over German unification and the transformation of Eastern Europe, one overarching fact is occasionally missed. The strongest military power in Europe remains the Soviet Union, and in many respects, and in ways still difficult to measure, the Soviet Union retains its full potential as arbiter of events in Central Europe, perhaps now less in conjunction with its transatlantic superpower partner and more with the new Germany: the determination of events in Europe is now more firmly in the hands of Europeans in ways not thought possible only a few months ago.

10. Even as German preoccupations over completing the integration of its eastern with its western parts will continue, post-unification, it is certain that German reticence internationally will disappear. Of necessity and inevitability, there will be pressure for the building of a truly global German foreign policy beyond the range of relatively narrowly-focused matters as now practised by the FRG. The effects of the emergence of this Central European superpower on our present transatlantic relationship with the FRG is as yet discernable in only the vaguest outline. As Germany unites, grows together and begins to flex its new muscles many of the assumptions Canada has so long held vis-à-vis the FRG will need the closest re-examination if we are to maximize the strengths we can draw from relationships with a transformed Europe. 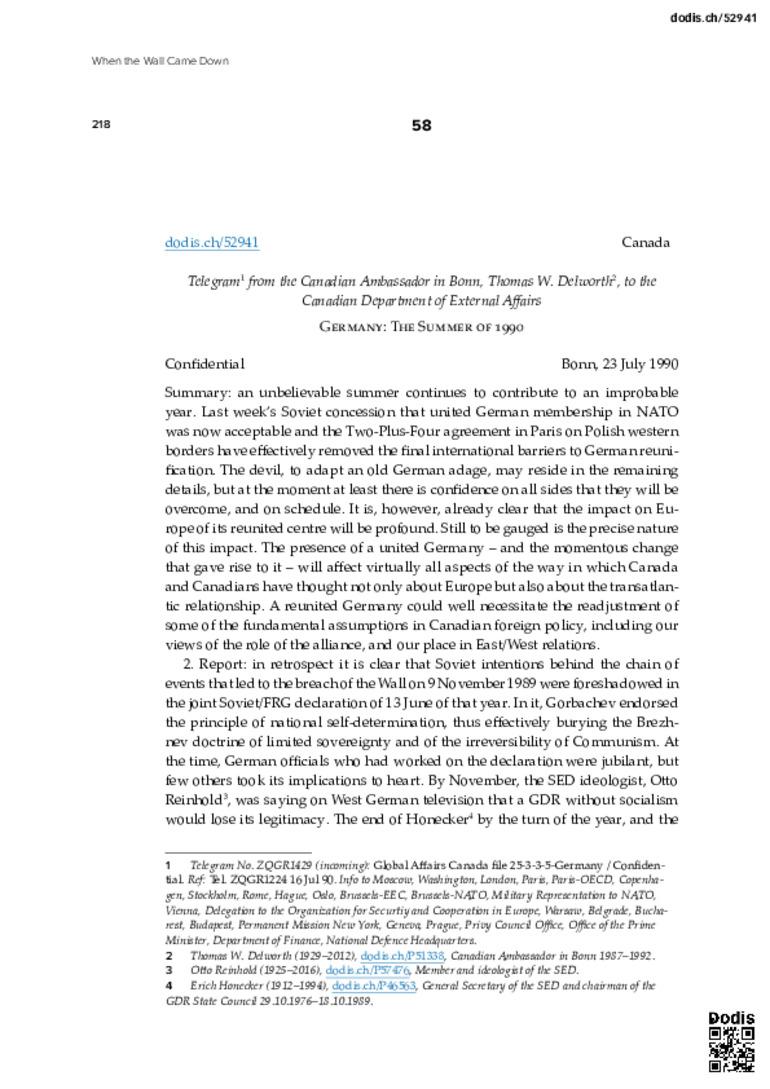 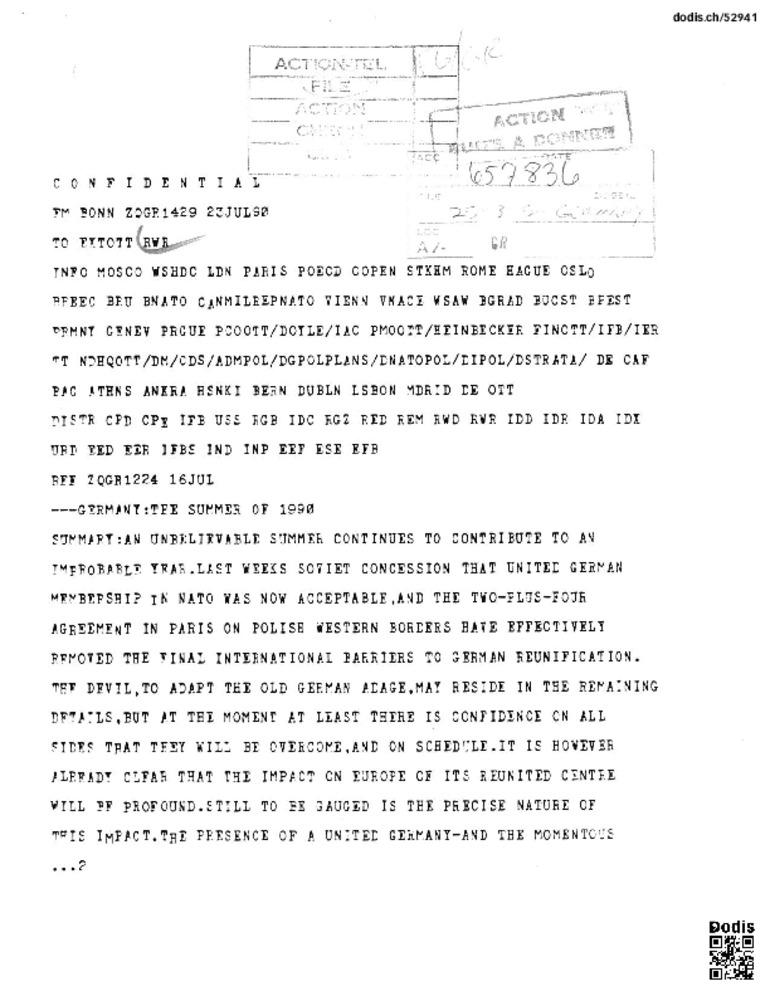 Persistent URL of this document: http://dodis.ch/52941