Language: English
Telephone Conversation with Chancellor Helmut Kohl of the Federal Republic of Germany
Minutes (PV) • secret
President Bush and Chancellor Kohl discussed proposals for the conventional force reduction talks in Vienna, particularly in light of recent developments in Eastern Europe and the Soviet Union.
How to cite: Copy

When the Wall Came Down. The Perception of German Reunification in International Diplomatic Documents 1989–1990 (Quaderni di Dodis 12), vol. 12, doc. 30

Chancellor Kohl: All the best. I hear all is going well. I am pleased the Panama matter4 went so well. The scoundrel5 is where he belongs.

The President: I appreciate your views very much. If you have a moment, I want to talk to you today about the way the political situation is developing in Eastern Europe and the Soviet Union, and how these events relate to our position in the talks on conventional arms in Vienna.

Chancellor Kohl: I would be very pleased. Take all the time you need.

The President: Our proposal on the table is for both the United States and the Soviet Union to have no more than 275,000 troops stationed in Europe when the CFE reductions are complete, in the mid-1990s. The Soviets have been putting out hints the figure is completely unrealistic, and I believe, given recent events, they are correct.

The Czech and Hungarian governments are negotiating now for Soviet troop pullouts by the end of this year or next.

Chancellor Kohl: I do believe they will pull out.

The President: Meanwhile, President Havel6 has indicated that he plans to ask in February for greater U.S. and Soviet troop cuts than those now in our CFE proposal.

We have heard from various people, including the Soviet negotiator in Vienna7, that Moscow is moving toward our position on capping U.S. and Soviet stationed forces, but we understand they’ll come at us with a number well below 275,000.

Chancellor Kohl: That is quite possible too.

The President: We need to be out in front. It would otherwise seem to the East Europeans as if we were trying to keep Soviet troops where they are not wanted.

In my view, nothing we do should in any way complicate or delay achieving CFE in 1990 and we should redouble our efforts to accomplish this.

Chancellor Kohl: I completely agree. It is of the utmost importance. I’ll wait until you finish; then I’ll make a proposal.

The President: We believe, after talking to our military experts about this, that a force of 195,000 U.S. troops in the Central zone in Europe in the mid-1990s is a significant and sustainable level to maintain forward defense and implement the NATO strategy of flexible response. 195 U.S. in the Central Zone (interpreter repeated only “195 U.S.”). I am persuaded that the best way to make these manpower reductions and to sustain the new force levels is within an arms control negotiating process, keeping the U.S. in Central Europe and NATO strong.

Chancellor Kohl: I believe that is something. Do you plan to introduce this into the negotiations now?

The President: I want to send Larry Eagleburger8 and Bob Gates9 over to talk to you quietly, and to Rome, London, and Paris, to be sure how key allies feel on this.

Chancellor Kohl: It is a very good idea, and we should soon set a date for these two gentlemen.

The President: I propose early next week, or in a few days. We should get out front with our objective so it will not seem as if we’re being dragged there by the Soviets or East Europeans.

Chancellor Kohl: That is exactly the point.

The President: We have pressure from our Congress, as you do with your Bundestag. We should get out front so they won’t take the heart out of our defense programs.

Chancellor Kohl: First, it is absolutely correct and right to take the initiative, and state this openly. The most important improvement in this Administration, compared to previous ones, is that you are always taking the offensive – for the Federal Republic, the US, and Europe in general. This is also my view with Eastern Europe, and I’ll have more on that later.

So, first, the principle of the idea is very good and useful. We’ll have to discuss the details. In Europe: Margaret10 will be difficult for various reasons not necessarily involved with this issue. I believe Mitterrand,11 if he is consulted sufficiently to defer to his psychological judgment, will probably follow my position. Let me phrase it differently: You know my old assessment – salute the flag of the FRG once, but the tricolor three times. That is very important, because there are French domestic policy issues. But I have a very friendly feeling about that. If you address Mitterrand directly, it will be OK.

Italy and Spain will most likely take the same position as we do, as will the Benelux and other countries. The most important thing is that Europeans see George Bush as taking the initiative, not just getting it from the Soviets.

When your people are over here next week, in my view next Thursday would be most convenient, I’ll talk to them for 3 or 4 hours and we can easily establish a German-US position.

The President: Is there any way you could see them on Monday or Tuesday? I have a State of the Union message next week on January 31. If we could do it before then, we’d like to announce this idea on January 31. This will be an enormous nationally and internationally noted speech.

I have one alternative proposal: If in principle this sounds agreeable, I could send it to you in writing and we could agree to work ·on the details after January 31, or have our people talk to your experts.

Chancellor Kohl: I am interested in talking to your people. I could accommodate them on Tuesday, at 1500 our time.

The President: They’ll be there.

Chancellor Kohl: That will be 0900 in the morning your time. Our talks will be complete by noon your time, and that should be sufficient for you. So, Teltschik12 will call on Monday to arrange the details. Then we could also talk on the phone on Tuesday evening, if that should be useful. I also agree that it is very important to announce this idea during your State of the Union address.

The President: Thank you my friend. Eagleburger and Gates will call on your office at 1500 Bonn time on Tuesday, January 30. Following that, if necessary, we’ll talk on the telephone.

Chancellor Kohl: OK. So, I would like to add a short remark on developments in Europe.

Chancellor Kohl: I hear the problems are increasing in Moscow, but there is no alternative with the personnel – I mean the number one13. But I think the situation is one where we should think on how we can help them, perhaps simply with food, food for some major cities. Apparently he has tremendous difficulties in moving supplies of food. This would not be as a gift, but with as few conditions for them as possible. I will call you again when I’ve progressed further in my considerations. Perhaps I will talk about this with Eagleburger.

The President: That would be very timely.

Chancellor Kohl: On Poland, Hungary, and Czechoslovakia, they are developing. It needs much time; the problems there are serious. But I believe they can handle them.

The situation is dramatic in the GDR. The reason is, that administration is having a very hard time in pushing things forward in a sensible manner. The reason is not that they don’t want to do it. They just cannot do it right. There is a considerable difference with Czechoslovakia. Havel has strong moral authority; Mazowiecki14 too, and the government in Hungary has much less authority, but some authority plus the support of the opposition. The Modrow15 administration has hardly any authority at all.

I myself am pushing necessary reforms forward piece by piece. There is some success in the economic field, but things that should take one day take weeks. The result: confidence of the population in the administration is catastrophic. People are leaving in the thousands, and the rest are sitting on packed suitcases. Since January 1,043,000 have come over. In the long term this is unsustainable. Those are the good people – doctors, engineers, specialists. They cannot be replaced.

I will be meeting with Modrow a week from Sunday in Switzerland for an hour, and he will be here on February 13, and I’ll do all I can to stabilize matters. Destabilization would have tremendous consequences for everyone else. I try to see this from an overall perspective, in connection with all the things to be considered like NATO, the EC, and disarmament questions. My job is now to stop destabilization in Central Europe. That is the matter I work on day and night now.

George, it’s my great wish that soon we might have a few hours to talk, just the two of us, with only a few people present. I’d like you to think about whether I could come over for a few hours. In November we talked about a possible visit to Camp David. Could we realize that in the next few weeks?

The President: I am very enthusiastic about that. Come and spend the night, perhaps on a weekend. I will talk to Eagleburger and give you some dates. It is very important that we sit down in just that setting.

Chancellor Kohl: I have some concrete ideas. I would have called you. I’m considering coming on a Saturday, returning on Sunday, in the evening.

The President: Perfect. I’ll be flexible on that.

Also, let’s keep this other idea in our confidence. If it leaks, the Soviets could get out in front.

The President: It worked last time. Baker is here; he sends his best.

Chancellor Kohl: My best to him too. Looking at my calendar, the best days would be February 24 and 25.

The President: Those look good for me.

(The President briefly conversed with Hannelore Kohl and assured her that she was welcome to come to Camp David and, if she came, Barbara17 would also be there.) 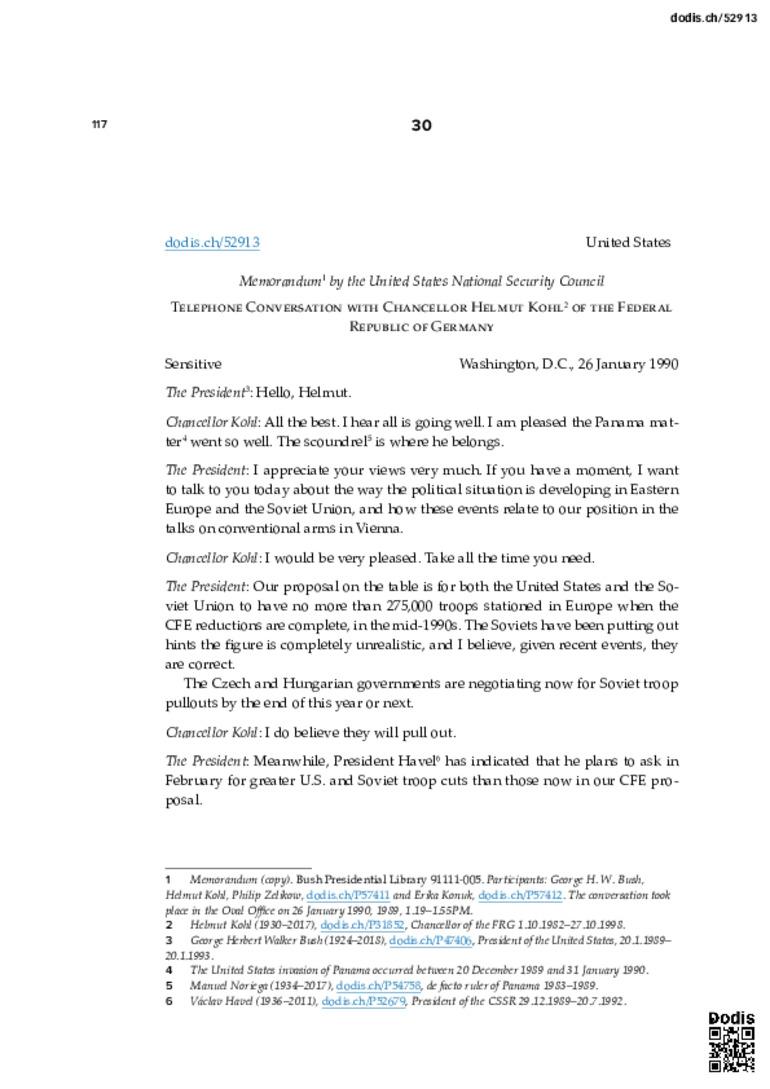 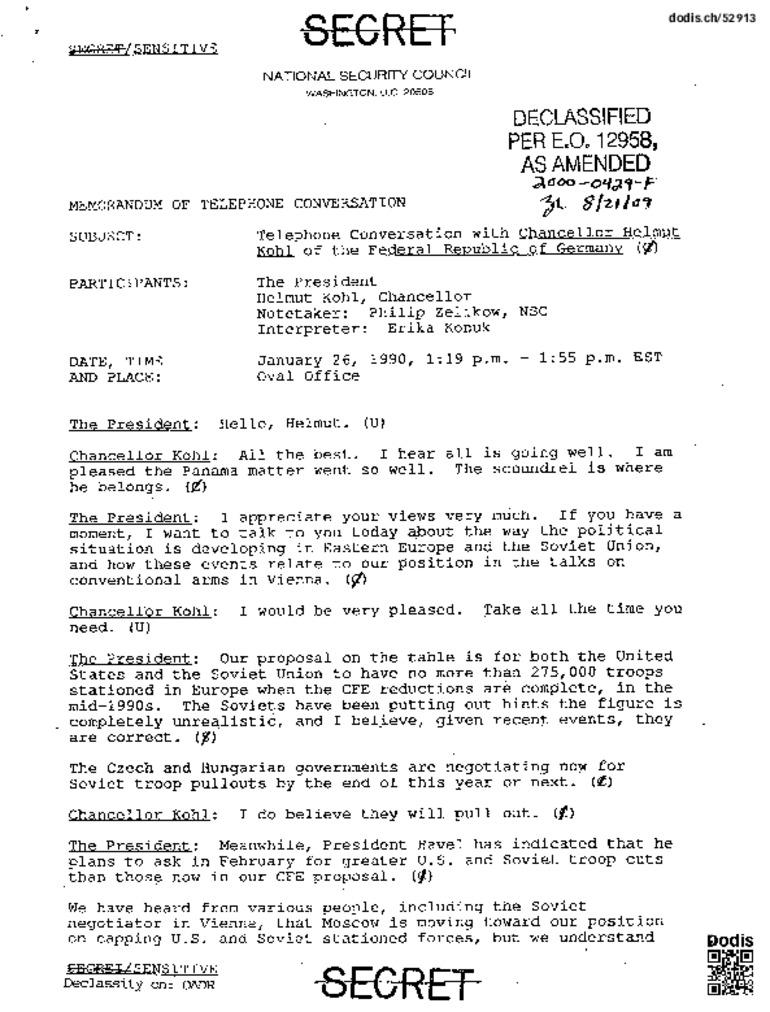 Persistent URL of this document: http://dodis.ch/52913