Language: English
No. ZQGR0559. German Reunification – The Street Speaks
Telegram (T) • confidential
Observations on how popular support for reunification is pushing the pace faster than anyone anticipated.
How to cite: Copy

When the Wall Came Down. The Perception of German Reunification in International Diplomatic Documents 1989–1990 (Quaderni di Dodis 12), vol. 12, doc. 25

dodis.ch/52938 Telegram1 from the Canadian Ambassador in Bonn, Thomas W. Delworth2, to the Canadian Department of External Affairs

Our German (West) interlocutors, such as Teltschik3 in Chancellor’s office, repeatedly have stressed to us that while Bonn recognizes dangers in pursuing reunification too precipitously and will remain loyal to its Western allies, it is the people in the streets of the GDR who will play a decisive role in this debate.

2. FRG electronic and print media is absorbed totally in what is happening next door. There is one dramatic event after another as the political guillotine (without a Robespierre) takes its toll. Krenz4 is now gone. Honecker5 is under house arrest. GDR state security apparatus is under siege and the entire SED, including Modrow6, appears discredited. Banners calling for reunification are blossoming in greater numbers. There is talk of advancing elections to May from the autumn and of a referendum on reunification.

3. But it is not only in the GDR streets that events are happening. In the FRG, Bild-Zeitung (FRG and Europe’s largest circulation newspaper) yesterday ran a one word, three inch high headline in national red, gold, and black colours “Einheit (Unity)”. USA Ambassador Walters7 made a public prediction that there will be a reunified Germany with Berlin as its capital within five years and has sent the Bonn coffee and cake Hausfraus crowd to gossiping about the merits of selling their houses in Bonn before real estate prices in Berlin become too high.

4. On 05 December it was announced by Modrow and Seiters8 of Chancellor’s office that an agreement had been reached on removing visas and currency changing requirements for West Germans visiting the East and setting up a currency conversion mechanism and fund for East Germans travelling West (details in separate telegram). This will result in massive two-way flow of Germans. A huge economic assistance plan is under discussion (our telegram ZQGR2473 06 DEC9). The CDU has announced that its next party conference in January will be split, with the first session in Bad Krasnall in Bavaria and the second in Leipzig, where it says there are many CSU supporters.

5. How far this integrative process, led primarily from below, will go is difficult to predict. It is, however, proceeding apace while statesmen talk and muse about what is and what is not possible. 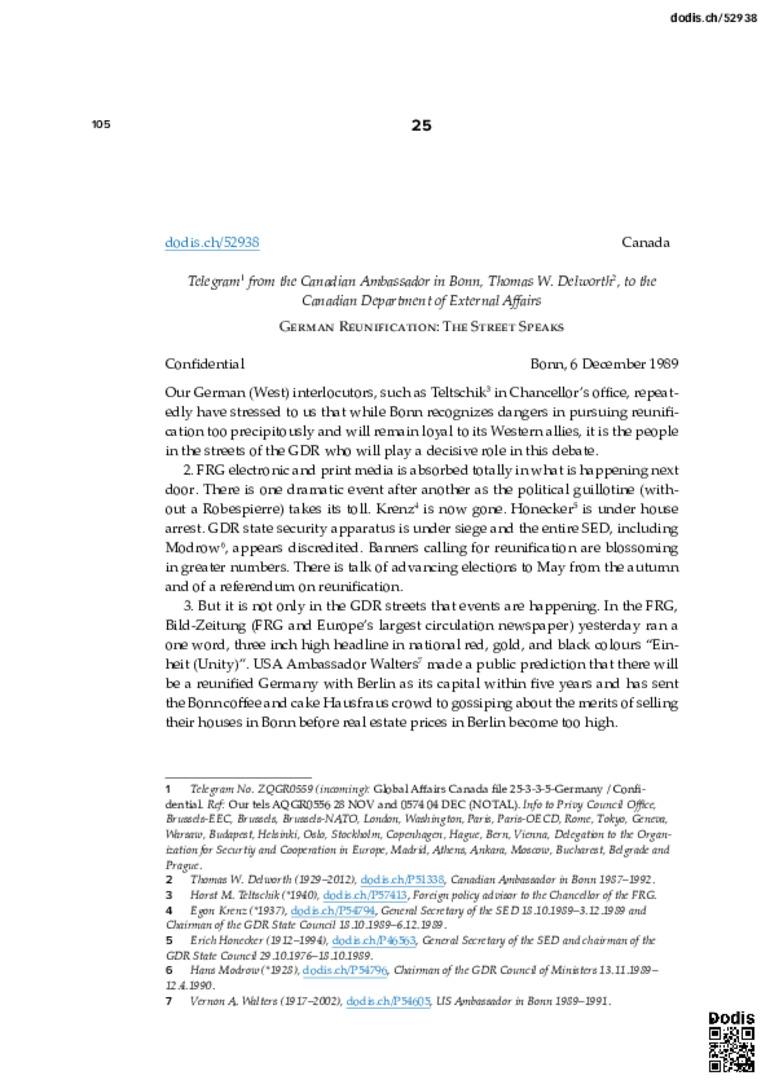 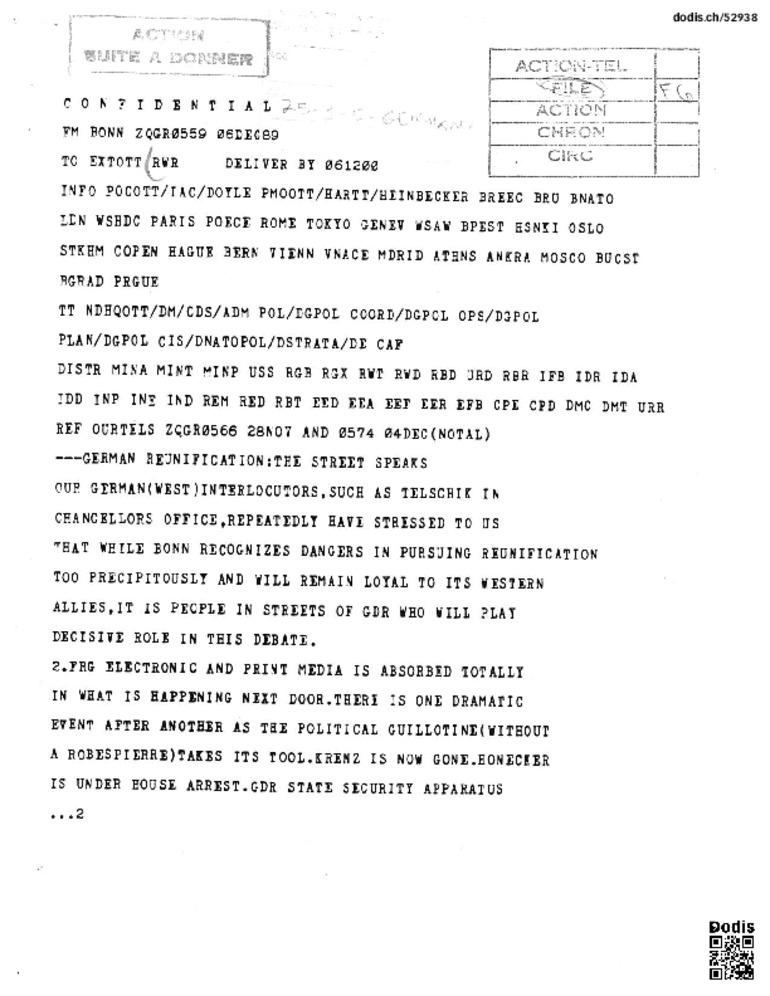 Persistent URL of this document: http://dodis.ch/52938