Language: English
No 31. German Unification
Telegram (T) • secret
Information about progress towards German unification and the Two plus Four process.
How to cite: Copy

When the Wall Came Down. The Perception of German Reunification in International Diplomatic Documents 1989–1990 (Quaderni di Dodis 12), vol. 12, doc. 48

dodis.ch/52920 Guidance Telegram1 from the British Secretary of State for Foreign and Commonwealth Affairs, Douglas Hurd2, to British Representatives Overseas

1. Unification is moving swiftly. The 2+4 talks on external aspects have begun in earnest.

2. – Glad 2+4 process underway. Constructive and conciliatory Ministerial meeting on 5 May agreed agenda for future work and pattern of future meetings.

– Much to do. Can now see way to completing work on external aspects in harmony with internal unification process.

– We agree with Chancellor Kohl4. Would be undesirable (see para 14 below), to decouple internal and external aspects of unification. Aim to complete in the same timeframe. Significant that Soviet Union now accepts that unification will and should proceed.

4. Will a Unified Germany be in NATO?

– Western countries, including the FRG, believe that a united Germany must be in NATO. So do East European members of the Warsaw Pact. A neutral or non-aligned Germany would not contribute to stability or security in Europe.

– Principle I of Helsinki Final Act sets out the right of every country to decide whether or not to be a member of a military alliance.

– But no interest in exploiting the situation to the Soviet Union’s disadvantage. Aim is to find a durable solution which takes account of others’ legitimate concerns.

– We are considering bilaterally (and in the 2+4) how such concerns can be met. Likely to include special transitional arrangements for territory of former GDR.

– Soviet Union must recognise that other developments in Europe (strengthened CSCE, progress on arms control, NATO changing) are helping to meet its legitimate concerns.

5. Incorporation of GDR in EC?

– Want to see GDR integrated into EC as fully, quickly, smoothly and transparently as possible. Have endorsed Commission’s framework for this process. Look to them and FRG/GDR to keep Council fully in picture.

– Basically, see EC acquis in all areas applying to ex-GDR territory from unification. But some temporary derogations may be needed where EC standards cannot be met at once (e.g. environment).

– Important that measures taken under German economic and monetary union before political union are aligned with EC law.

– Clearly important that this issue should be settled definitively.

– Welcome agreement among Poland, GDR and FRG that Poland’s western border (Oder-Neisse line) should be enshrined in a treaty. Poland invited to 2 + 4 Ministerial in Paris in July, when borders will be on agenda. Poles will also attend the official level meeting which will prepare for this.

– Western protecting powers and Soviet Union will need to discuss with the Germans how the Four Power regime in Berlin might best be wound up. Agreed that this will be on the 2+4 agenda.

– No. FRG has changed fundamentally since Nazi period. Forty years of well established liberal democracy. A close partner and ally.

– Internal aspects of unification are primarily a matter for the Germans themselves. We have always supported their right of self-determination on a democratic basis.

– Four Powers have rights and responsibilities relating to Berlin and Germany as a whole. But the establishment of the 2+4 framework is not meant to exclude others or intrude upon decisions for other fora. Relevant issues are discussed in e.g. NATO and EC.

– Outcome of 2+4 should be laid before CSCE summit.

11. Future of Soviet Forces in GDR?

– Yet to be agreed. Primarily a matter between the FRG and Soviet Union but FRG, as NATO member, have indicated their intention to consult closely with allies. But it is envisaged that there might be a transitional period when some Soviet forces remained temporarily in what is now the GDR, after unification. We have no wish to cause instability through sudden change.

Background (Restricted – may be drawn on with trusted contacts)

12. The first 2+4 Ministerial took place in Bonn on 5 May, preceded by preparation at Political Director level. Future meetings are planned for East Berlin in June, Paris in July (when the Poles will attend), Moscow in September and then Washington and London. Political Directors also met on 22 May and will meet again on 9 June and, probably, 4 July.

13. The agenda agreed for future talks is:

14. The main development in Bonn on 5 May was Shevardnadze’s proposal that the internal aspects of unification (which could be settled quickly by the Germans) and the external aspects (which should be subject to a transition period during which 4 power rights would be continued) should be de-coupled. The Germans have since firmly rejected this proposal. It would prolong the Soviet locus in German affairs: continue singularisation of Germany by limiting her sovereignty after unity: and create false parallelism between the presence of Allied and Soviet forces in Germany. The issue was not raised at the 2+4 official level meeting on 22 May.

15. The Russians also aim to secure an outcome which restricts the freedom of German action such as limits on the Bundeswehr, united Germany not (not) in NATO integrated structure etc.

16. The Ministerial meeting in June is likely to focus on structure of a final settlement including ending of provisional nature of borders, Berlin and termination of Quadripartite Rights and Responsibilities. Politico-military issues are also likely to be aired. But the Western Four are determined that the 2+4 should not (not) take decisions on issues which are the responsibility of other fora, e.g. CSCE, CFE, SNF and NATO. There may be some cross reference to these. But 2+4 should act as no more than a “post-box”.

17. Russian concerns might be met by referring to developments in these other fora and to acts of German self-determination such as over NBC weapons.

18. Internally unification is moving swiftly. The FRG/GDR State Treaty providing for economic, monetary and social union was initialled on 18 May and has passed to the two German parliaments for ratification. Target date for GEMU5 itself is 2 July. The signs are that the GDR may move towards state unity with the FRG by the turn of the year with Kohl now going for all-German elections in December or January, dropping the FRG elections scheduled for 2 December.

19. The Western Four are taking care to keep NATO and EC partners fully briefed both multilaterally and individually. The Dutch and Italians have been particularly sensitive.

6
These paragraphs gave an overview of progress towards unifaction and the challenges ahead.↩ 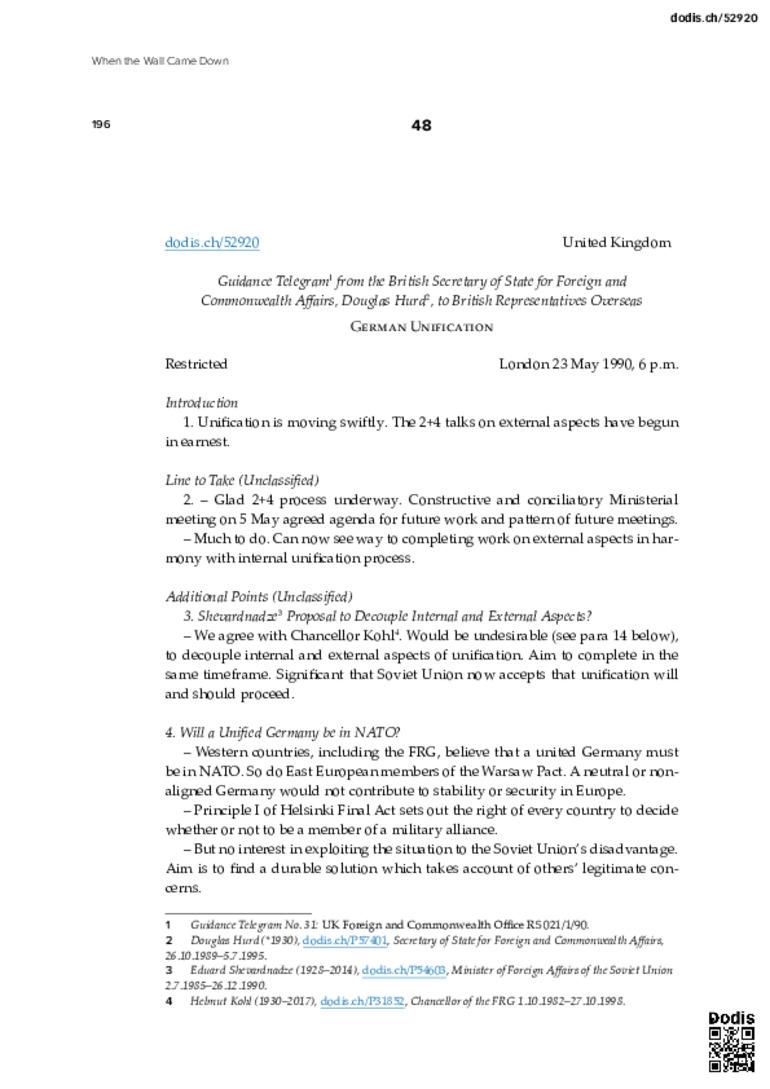 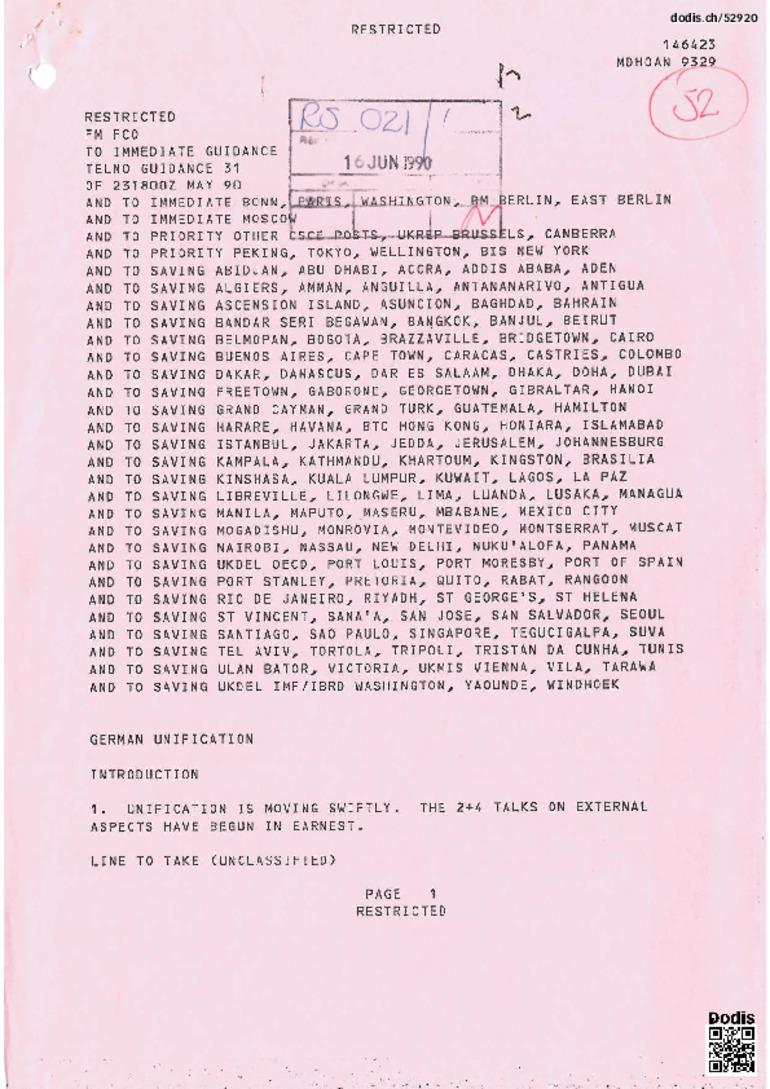 Persistent URL of this document: http://dodis.ch/52920