Language: English
Conclusions of a Meeting of the Cabinet held at 10 Downing Street on 15.11.1989 at 9.30
Report (CR) • secret
The events in the GDR were discussed.
How to cite: Copy

When the Wall Came Down. The Perception of German Reunification in International Diplomatic Documents 1989–1990 (Quaderni di Dodis 12), vol. 12, doc. 20

3. The Foreign and Commonwealth Secretary3 said that events in East Germany had moved very rapidly, particularly following the measures taken to introduce freer travel between East and West Berlin. The key question now was whether the East German government would agree to hold free elections. Their intentions were still obscure. The new Prime Minister, Herr Hans Modrow4, the former Party Secretary in Dresden, had been elected on 13 November. He had the reputation of a reformer. The Party Congress had been brought forward to 15/17 December. This was bound to be a crucially important occasion. The opposition groups were pressing for free elections, but did not want these to take place immediately since they were not yet ready. There had been intensive diplomatic activity as events in East Germany unfolded. The Prime Minister5 had been in close touch with other allied leaders. Despite excessive press speculation, allied governments had reacted steadily and with caution. This had emerged clearly at the Western European Union Ministerial meeting on 13/14 November. The French President, M. Francois Mitterrand6, had organised a meeting of European Community (EC) leaders on 18 November. It was to be hoped that EC leaders would express their support and welcome for the changes taking place in Eastern Europe while agreeing on the need for a careful and steadfast approach, based on existing well-tried institutions. Account had to be taken of the position of the Soviet President, Mr Mikhail Gorbachev.7 He faced a difficult situation but it was very much in the interests of Western governments that he should remain in power. The question of German reunification was extremely sensitive. Given the German Constitution and political life in West Germany, it was inevitable that there should be some discussion of reunification. All the allied governments had been committed to this general principle for many years. At the same time no-one in a position of influence in the West or East believed that reunification was likely to happen rapidly, or that this would be desirable in the near future. This view was also shared by reformers inside East Germany. President Mitterrand’s purpose in organising the meeting on 18 November was probably to try to dispose of developments in Eastern Europe before the European Council meeting in Strasbourg on 8/9 November. This was unrealistic. Much was likely to happen in the intervening period before the European Council. Moreover, these issues were so important for the future of the EC that they would need to be discussed again in depth at the European Council. Nevertheless, on the whole the allied response in Eastern Europe had been sensible and prudent.

In discussion, the following points were made:

a) A clear framework for dealing with the changes in Eastern Europe had been laid down, most recently in the Prime Minister’s speech at the Lord Mayor’s Banquet on 13 November. It was essential to maintain existing institutions, especially the North Atlantic Treaty Organisation. Ministers should not raise the issue of German reunification, which was not an immediate issue. Progress had already been achieved on strengthening the EC’s economic relations with East European countries. The EC had signed trade agreements with Poland and Hungary, and an association agreement with Yugoslavia. In due course Poland and Hungary might want to negotiate association agreements. Such a development was unlikely to cause major problems for the Soviet leadership. If events moved too quickly or Western governments did not continue to take a measured and prudent attitude, there was a risk that President Gorbachev might be swept away. This would cause grave damage to the broader Western objective of promoting democracy throughout both parts of Europe, and ultimately from the Atlantic through the Soviet Union to the borders of China. The EC could not ignore these crucially important processes of historic change which would have a profound effect on developments within the Community.

b) The West German Finance Minister, Herr Waigel8, had made clear both in the formal and informal meetings of the Economic and Finance Council on 13 November that West Germany saw its future as remaining an integral member of the EC and Western Europe. Herr Waigel had emphasised that West Germany was not seeking reunification at the present time. The same line had been taken by the West German Foreign Minister, Herr Genscher9, and the Defence Minister, Herr Stoltenberg10, at the Western European Union Ministerial meeting. Nevertheless, these statements contrasted with the greater attention paid to the theme of reunification by Chancellor Kohl11 in recent speeches, though it should be remembered that he had always been one of the foremost advocates of reunification among German political leaders.

c) Against this background, the West German government was likely to show an increasing tendency to examine new proposals for greater integration within the EC in the light of the implications for closer relations between East and West Germany and eventual reunification. In certain cases this tendency might be helpful to Britain’s own interests.

d) In reality there were already close links between East and West Germany. West German companies were able to take advantage of cheap labour in East Germany in their manufacturing processes. Goods from East Germany were admitted to West Germany, and hence into the EC, without tariffs or quotas. Hitherto West German companies had been deterred from major investment in East Germany because of the political situation there. The recent changes were likely to stimulate a significant flow of new West German investment in East Germany. The Polish and Hungarian governments had stressed recently that they attached importance to securing increased investment from Britain and other EC countries to maintain the preponderant weight of West German trade and investment flows. On the other hand, East Germany and the other reforming East European countries would have great difficulty in practice in implementing the structural changes necessary to create genuine market economies based on private enterprise. This was likely to be a long process.

e) West Germany had a trade surplus of £35 billion with the rest of the EC in 1988. Closer economic links between East and West Germany would present a formidable challenge to the other members of the EC. With a combined population of nearly 80 million people this economic entity would have a major distorting effect on EC projects for closer economic and financial unity and the concept of a Single Market. The EC could not afford to ignore the EC’s relations with the European Free Trade Area (EFTA). The EC’s import standards would need to be maintained both in relation to East Germany and EFTA.

The Prime Minister summing up the discussion, said that it was of cardinal importance for Western governments that all these complex questions should be handled carefully and prudently. Allied governments should remain in close touch, especially Britain, France and the United States who had Four Power rights and obligations. Although Western governments had taken a formal position since 1955 in favour of East German self-determination, German reunification should not be treated as an immediate issue. Governments should take due account of the implications of the present turn of events for President Gorbachev’s position. A change in the Soviet leadership would inflict major damage on the prospects for the further spread of democracy in the Soviet Union and Eastern Europe. The EC would need to discuss these issues in depth both at President Mitterrand’s dinner and at the European Council in Strasbourg. EC member states could not simply concentrate on internal developments within the Community without taking account of trends in Europe as a whole. A single European currency was no answer to these wider changes. Although events were moving in a favourable direction, Europe faced a difficult decade ahead. 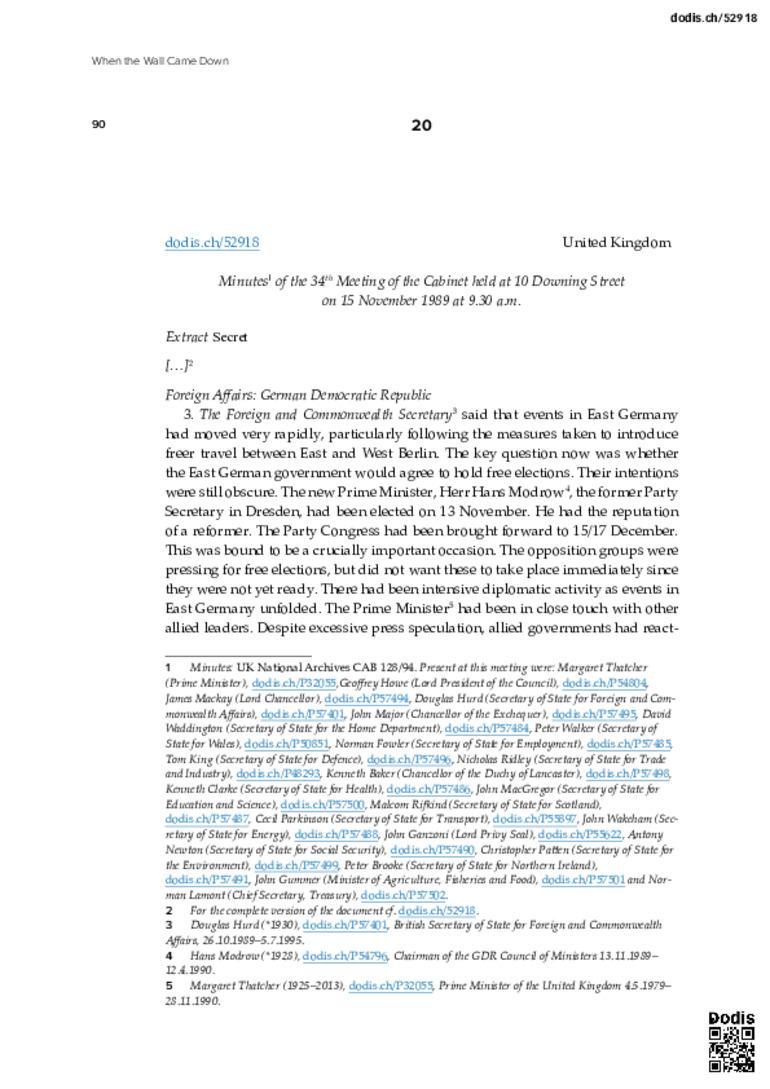 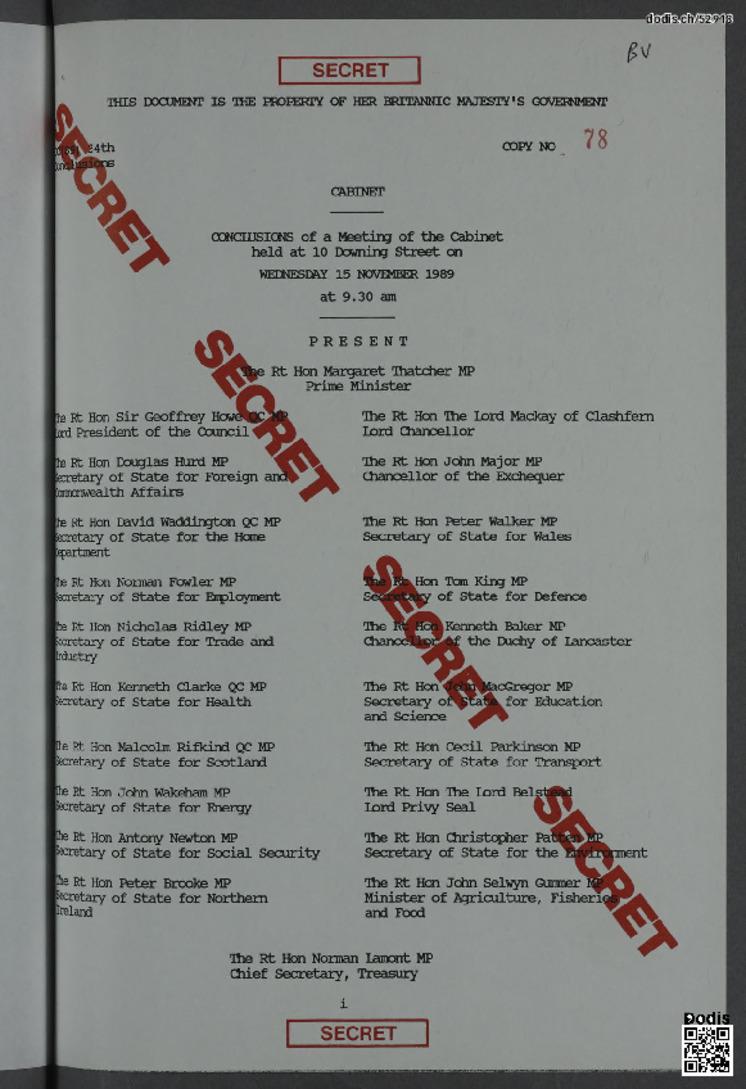 Persistent URL of this document: http://dodis.ch/52918