Language: Polish
Urgent Note Concerning the Talks between Prime Minister T. Mazowiecki and Chancellor H. Kohl in Frankfurt an der Oder and Slubice on 8 November this Year
Memo (No) • urgent
Summary of the talks between Prime Minister Mazowiecki and Chancellor Kohl. The current developments and arrangements for immediate measures, plans to sign a border treaty and a good neighbourly relations treaty, and the decision to abolish the visa requirement are discussed.
How to cite: Copy

When the Wall Came Down. The Perception of German Reunification in International Diplomatic Documents 1989–1990 (Quaderni di Dodis 12), vol. 12, doc. 63

Urgent Note Concerning the Talks between Prime Minister T. Mazowiecki3 and Chancellor H. Kohl4 in Frankfurt an der Oder and Slubice on 8 November this Year

I. In the course of talks held by Prime Minister T. Mazowiecki and the FRG’s Federal Chancellor H. Kohl in Frankfurt an der Oder and Slubice on 8 November the following was arranged:

a) This November in Warsaw, the Foreign Ministers are to sign a Treaty between the Republic of Poland and the Federal Republic of Germany confirming the existing border between them5.

b) The process to negotiate the Treaty on Good Neighbourhood and Friendly Cooperation is to be completed by late January 19916.

c) The two aforementioned treaties will be submitted together for ratification by the parliaments of Poland and FRG, by late February 1991 at the latest.

a) The FRG government has already decided to lift the visa requirement for Polish citizens (on a reciprocal basis) and intends to implement this decision later this year7. With this in mind, it entered into official consultations with France and the Benelux countries (the so-called Schengen group). A positive decision by the Schengen Five is due in late November; it would make it possible to remove visas for travel to these countries, before Christmas if possible (by way of an exchange of diplomatic notes).

b) Polish consular, passport, and customs services will take actions — in coordination with their counterparts from the FRG, France, Belgium, the Netherlands, and Luxembourg — to ensure smooth handling of the expected increased movement of people from and to Poland and to ensure it is not abused for purposes that contradict the agreement about to be concluded (e.g. illicit trade, smuggling, taking up work without permit). The number of border crossings will be expanded; they will be extended and upgraded; passport and customs clearances will be simplified and streamlined but with the simultaneous introduction of more stringent customs checks and more severe administrative measures against people who abuse the freedom of visa-free travel, etc.

c) As soon as possible, i.e. to the extent practicable in the first quarter of 1991, a pilot project will be launched: the construction, at the FRG’s cost, of a 10km-section of a six-lane motorway on both sides of the border (5km from Frankfurt an der Oder into Germany + 5km from Swiecko into Poland.

a) The following will be established: A Joint Inter-Governmental Commission for Regional Cooperation and a Joint Border Commission (composed of representatives of Polish provinces, border towns, communes and FRG Länder located along the border).

b) In 1991, a separate Poland-FRG treaty will be made on regional cooperation.

c) Relevant provisions will be adopted in the Treaty on Good Neighbourhood and Friendly Cooperation.

Youth exchanges should grow several times in 1991 as compared with this year (expected levels of 6,000–7,000 people). The composition of the Polish-German Youth Exchange Council will be considerably changed. Furthermore, a joint Office for the organisation of youth exchanges will be established (modelled after the Deutsch-Französisches Jugendwerk).

In January 1991, the heads of government of the two countries will reach agreement about using a pragmatic approach (foundation, fund) with respect to the aforementioned category of Polish citizens who had suffered under the Third Reich.

II. On economic and financial cooperation between Poland and the FRG:

1. A list of our most important proposals and suggestions will be drawn up, together with a short statement of grounds (non-paper), which will be conveyed to the FRG accompanied by a personal letter from Prime Minister T. Mazowiecki to Chancellor Kohl; this will be a working basis for talks between Deputy Prime Minister L. Balcerowicz8 and H. Kohl (the FRG Chancellor reiterated his invitation for a visit). On this basis, H. Kohl will support relevant Polish efforts at the EEC summit (14 December this year), in the Paris Club, and among the 24 countries. The non-paper should specifically address such issues as Poland’s association with the EEC, write-off of Poland’s debts, compensation for the losses over the Gulf crisis, cooperation projects within the FRG-Poland-USSR triangle (e.g. construction of homes for Soviet soldiers returning from the former GDR, food shipments for the USSR), or perhaps the issue of Poland’s losses in connection with the reunification of Germany.

2. Employment of Polish contract workers in Germany: Our consent to signing a new Polish-German pension agreement has been made conditional on the acceptance of our proposal, i.e. retention of the current employment limits (11,000 in the FRG, 35,000 in the former GDR).

If this issue cannot be resolved still this year, the heads of Polish and FRG governments will raise the issue of rouble conversions in our trade with the former GDR area in January 1991.

1. Transfer of military equipment, weapons and ammunition from the FRG to Poland from the stocks of the former GDR National People’s Army: H. Kohl has agreed to meet some of the Polish side’s requests (mainly with respect to ammunition, rifles, and combat vehicles); this matter will be conclusively settled during the coming FRG visit of the Polish Minister of National Defence9. It will be also essential for Poland to obtain approval from the USSR. At H. Kohl’s request, this matter should for the time being be given a low profile (pending its successful conclusion), among others because of similar efforts by Hungary and the Czech and Slovak Federative Republic.

2. Transit of Soviet troops from the former GDR through Poland into the USSR (costs to be covered by the FRG). A joint panel of experts will be set up to discuss this issue. It will be also raised during the FRG visit of the Polish Minister of National Defence.

3. Reinstallation of a TV/radio transmitter on Sniezka (removed in 1980 at the request of the GDR), funded by the FRG, for broadcasting in Polish, German, and Czech. Prime Minister T. Mazowiecki has promised to grant this FRG request; at the same time he noted the need to implement projects to launch TV/radio channels for the Polish diaspora and emigrants in the FRG.

IV. I ask the ministries concerned to promptly contact the relevant FRG authorities in order to implement the aforementioned decisions. The Ministry of Foreign Affairs is to be updated on an ongoing basis on progress in this area.

5
Treaty between the Republic of Poland and the Federal Republic of Germany Concerning the Demarcation of the Established and Existing Polish-German State Frontier signed in Warsaw on 14 November 1990.↩

6
Treaty between the Republic of Poland and the Federal Republic of Germany on Good Neighbourly Relations and Friendly Cooperation signed in Bonn on 17 June 1991.↩

7
Agreement on the Abolition of the Visa Requirement concluded in the form of exchange of notes on 4 April 1991.↩ 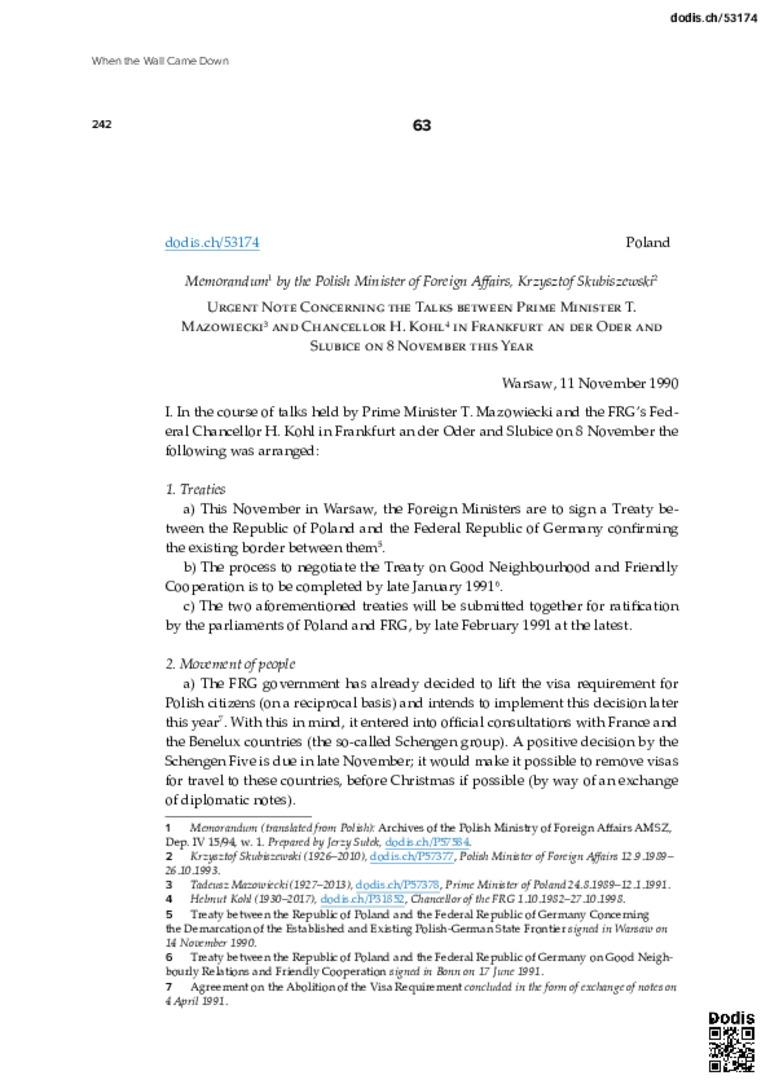 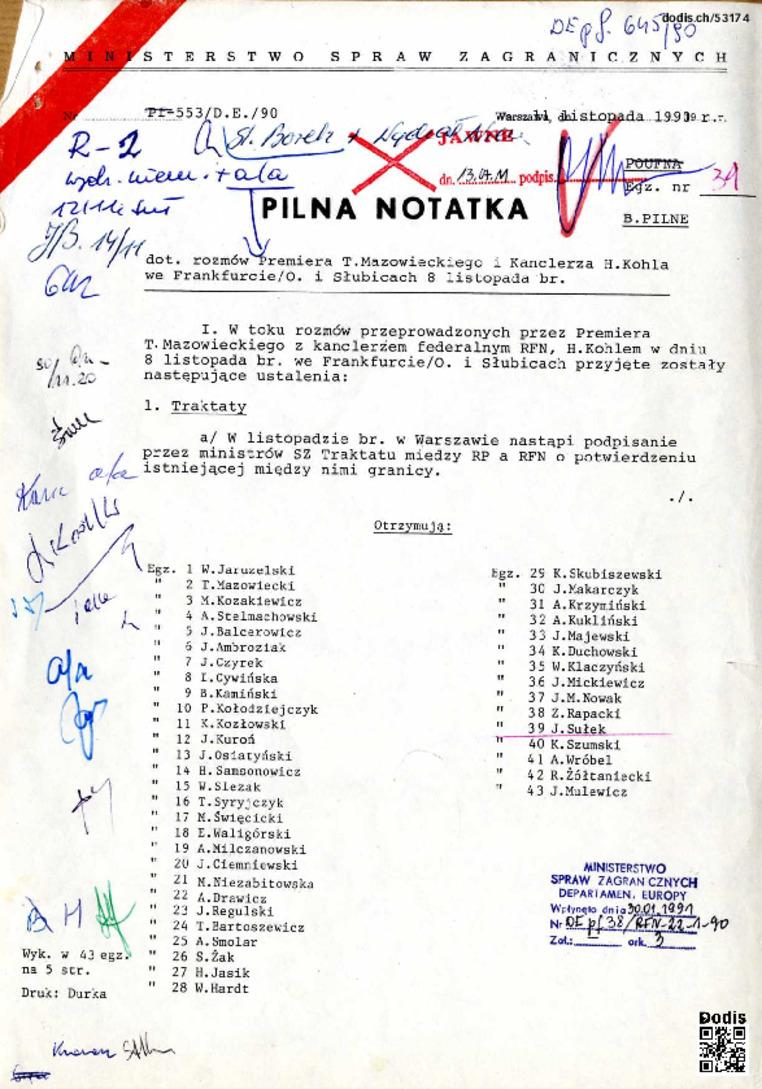 Persistent URL of this document: http://dodis.ch/53174