When the Wall Came Down. The Perception of German Reunification in International Diplomatic Documents 1989–1990 (Quaderni di Dodis 12), vol. 12, doc. 32

dodis.ch/52951 Memo1 for the Foreign Minister of the FRG, Hans-Dietrich Genscher2

Soviet Position on the German Question. Latest Comments by Gorbachev and Shevardnadze

Purpose of the memo: for information

With his manifest and unreserved support for German unification, Gorbachev3 has put himself – as so often in the past – in the vanguard of a development that has been recognised as unstoppable. He is acting from the conviction that he will only be able to influence further developments between East and West Germany if Moscow no longer seeks to slow down the course of events. However, Gorbachev’s support is surprisingly clear. While not unexpected, it is more the logical conclusion of his view that the German Question remains open and is thus the culmination so far of a development apparent in his comments since November 1989, as well as in Shevardnadze’s4 speech in Brussels on 19 December 19895 and article in “Izvestia” on 18 January 1990.

Gorbachev is acting now because – like Shevardnadze in his article in “Izvestia” – he wants to largely steer and tangibly influence the discussion on and organisation of a CSCE Summit. He is making use of the short period before Ottawa6 to lend impetus to the discussion in the West. At the same time, he is addressing the Soviet public with the aim of gaining support for a historically inevitable and increasingly urgently needed solution to the German Question. This latter aspect is very important for Soviet domestic policy as regards underpinning foreign policy. The clear show of support for Modrow7 and the fact that the Party of Democratic Socialism (PDS) has now recognised German unification as necessary make Gorbachev’s comments helpful for this affiliated party’s election campaign. His critical subtext denouncing destabilisation attempts should be understood in this context. In protecting Modrow, he is simultaneously avoiding any connection with the future fate of the PDS. Gorbachev is explicitly addressing Germans in both East and West, thus reflecting Shevardnadze’s positive conclusion in the “Izvestia” article and trusting the Federal Government to live up to its historic responsibility for peace and stability in Europe. Moscow is already developing positions for its dialogue with both German states after 18 March.8

1. In view of German unification, which Moscow regards as inevitable, this process must be guided. That is why Moscow cannot afford to abandon the classic instruments (Four Power responsibility; enemy state clause9) now. In the future, we should continue to expect Soviet warnings against unilateral and destabilising measures aimed at the GDR and in relation to our European neighbours (no automatic incorporation of the GDR, no interference in internal affairs and a clear stance on the border issue).

In view of these signals from Moscow, we should take the following into account:

– The Four Power rights are important for the position of the three protecting powers in Berlin even if developments between East and West Germany are likely to improve the city’s situation independently of these rights. However, their original purpose of safeguarding peace in and around Germany has now been superseded by other instruments.

– Shevardnadze’s linking of the Four Power rights, the Charter of the United Nations and the CSCE process is something we can turn around and use for ourselves in the following way. If the Four Power rights and the UN are not current issues because there is no threat to peace, then they are at best a type of insurance policy for purely hypothetical cases, thus leaving the CSCE as the only truly relevant instrument for shaping policy rather than preventing war.

We, too, should determine the course of the CSCE Summit in light of German policy aspects. In giving us the right to self-determination and the possibility of peaceful change, the HFA10 provides us with enough prerequisites for German unification. It would be in our interest to state in a Summit document that Germany’s development must be embedded in Europe’s. This would simultaneously commit all Europeans to German unification. However, we should not tie this to a strict schedule so that the strong momentum in German development can continue speeding up European integration to the same extent as before (locomotive function).

In order to create a politically meaningful connection that is also flexible as regards the concrete development of relations between East and West Germany (synchronisation), it seems sensible to expand the CSCE process, including a certain amount of institutionalisation.

1. The German Question is one of Moscow’s most important instruments for influencing European development in view of the changes in the Warsaw Pact partner countries, the unstoppable withdrawal of Soviet troops from Central Europe and recognition of the dramatic economic emergency in the Soviet Union. With regard to the CSCE Summit, Moscow will thus try to make greater use of us as an engine for pan-European security structures.

– Moves towards closer relations between East and West Germany and German unification will be fostered by progress in West-East relations/arms control and economic and political cooperation. Germany’s interest in the first of these points is thus useful with a view to the Soviet interests in the latter.

In this regard, German interests are a possible “catalyst” for developments that could be of benefit to the Soviet Union. We should develop this element in our own interests and highlight it. This would also be a logical continuation of previous constellations in which both German states played a part in arms-control achievements via their alliances. We still have this constellation. It will remain as a positive factor for West and East in the process and after unification of the two German states.

– At the same time, the Soviet Union will endeavour to find common interests with other European countries that could form a counterbalance to developments between East and West Germany. (It is likely to continue trying to avoid unilateral dependencies when it comes to safeguarding its interests). In this way, Moscow can use the German Question as a lever with our western partners in order to achieve a “soft landing” in terms of time in the changed relations between East and West Germany.

2. As regards protecting our own interests, this means putting German unification at the heart of plans for the future Europe. As the “heart of European security” (Shevardnadze’s article in “Izvestia” on 18 January), Germany fosters the transformation of the alliances in a cooperative security structure. Our aim of political integration between all Europeans is thus coming closer to being achieved. We should therefore encourage Moscow in its firm belief that only a united Germany will be a key factor for stability and the pacemaker for Central and Eastern Europe’s economic and social development.

Gorbachev’s “big move” shows that in light of developments in the GDR (and other Warsaw Pact countries), he has decided between Shevardnadze’s two views of changes between East and West Germany, that is, a “catalyst” or a “destructive factor”. Only a course that uses the momentum of German developments for peace and stability in Europe, rather than opposing them, will foster the Soviet Union’s security interests and role in shaping events. At the same time, this move creates new “coordinates” for our policies. We will need to integrate the effects of Gorbachev’s decision on the direction to take carefully in our policies on Germany and the West.

5
In this speech before the Political Committee of the European Parliament Eduard Shevardnadze explained the Soviet position on European integration and on a possible German unification.↩

6
The Open Skies conference convened on 12 February 1990 in Ottawa, Canada. It was the first large scale international conference after the fall of the Berlin Wall.↩

8
On 18 March 1990 the first free and democratic election to the People’s Chamber of the GDR took place.↩

9
The term enemy state clause refers to Article 53, Article 107 and a half-sentence in Article 77 of the Charter of the United Nations of 26 June 1945 by which the signatory States can take enforcement action directed against renewal of aggressive policy on the part of an enemy state (including military intervention) without special authorisation of the UN Security Council. Enemy states are defined as any state which during the Second World War has been an enemy of any signatory of the present Charter (that is, primarily Germany and Japan).↩ 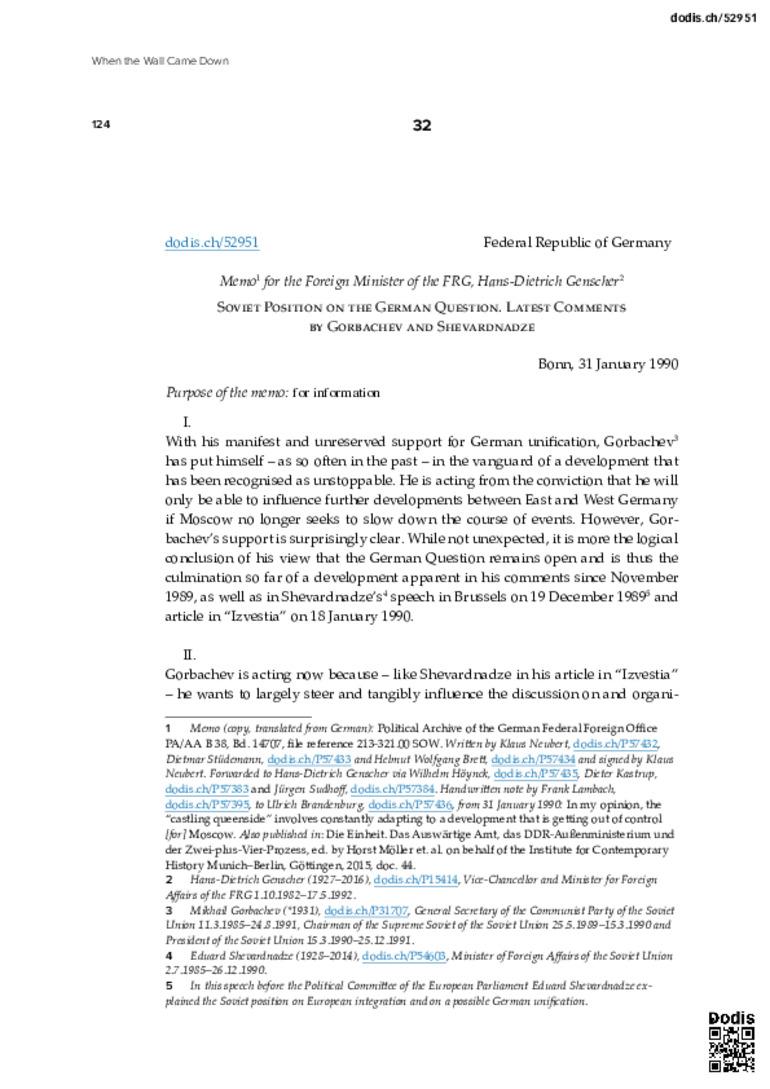 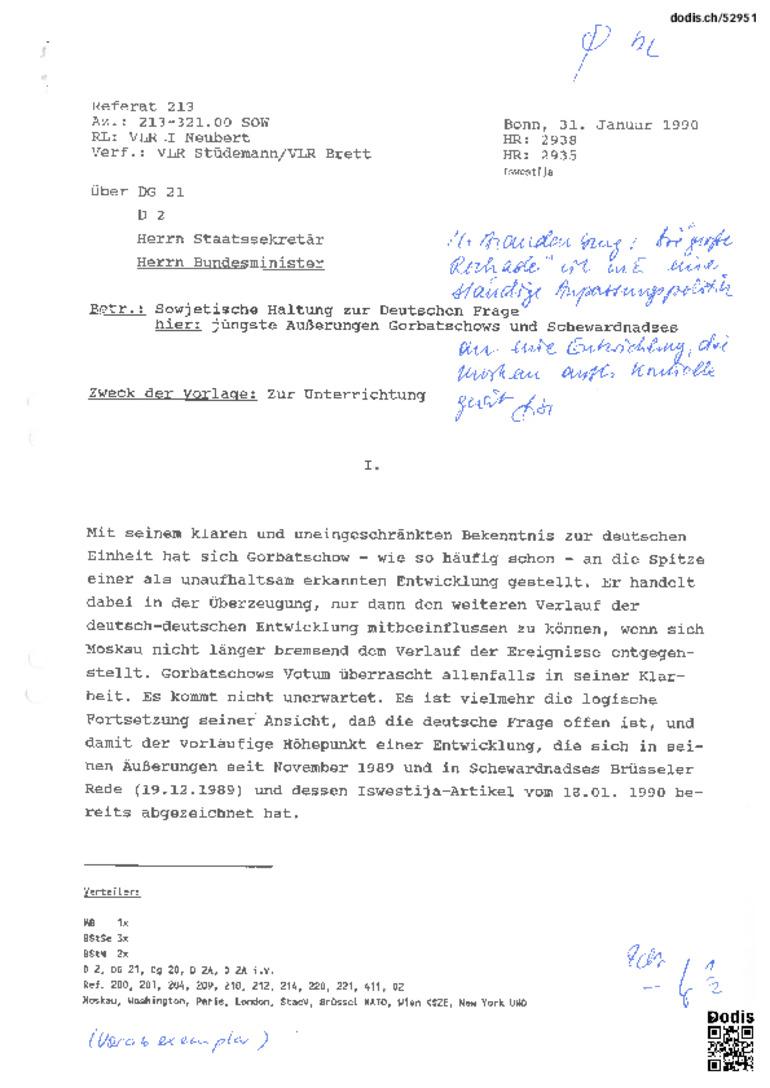 Persistent URL of this document: http://dodis.ch/52951