When the Wall Came Down. The Perception of German Reunification in International Diplomatic Documents 1989–1990 (Quaderni di Dodis 12), vol. 12, doc. 21

dodis.ch/52949 Memo1 for the Foreign Minister of the FRG, Hans-Dietrich Genscher2

For information (ahead of the forthcoming talks in Washington3)

1. The events in Berlin and the GDR have dominated the US media for days. Interest in Germany and German/European-US relations has increased enormously among the public (top TV journalists have been sent to Berlin; evening news programmes have been broadcast in front of the Wall, with clips of historic scenes; there have been special features in the “Washington Post” and “New York Times” and Ambassador Ruhfus4 has given several TV interviews). Moving scenes (cheering, joy, spontaneous celebrations) and highly symbolic images (the Wall, Brandenburg Gate, people embracing and shedding tears of joy) reflect Americans’ tendency to be emotional and preference for images. A large wave of sympathy has gripped the entire country. This is of great help to our public diplomacy work and we should certainly make use of it. The Embassy and German Information Centres are working flat out to do so. The large number of requests for interviews provides a unique opportunity for Federal Government officials to present Germany and its policies to a broad and receptive US audience.

2. The resounding echo in the media and among the US public made the Administration’s reaction, which largely reflects our own, look rather subdued in contrast. The focus is on realism, safeguarding stability and, most importantly, preserving unity in NATO. On the evening of 9 November, Bush5 said (in Baker’s6 presence and with no expression on his face) that he was “very pleased” about the opening of the GDR borders. He praised the Federal Government for having “done a magnificent job”, but was reserved about further developments and said it was “way too early” to speak about reunification. Asked why he did not seem to be “elated”, Bush said he was “just not an emotional kind of guy”.

On the following day, Baker said he was “extremely happy”; however, in interviews he described an implied connection between the events and reunification as “premature” (10.11.1989 MacNeil/Lehrer7). For his part, Vice-President Quayle8 has said that “the reunification of Germany is inevitable”.

There are three reasons for Bush and Baker’s cautious statements:

– the desire to signal to the Soviet Union in the run-up to the summit near Malta that the US does not wish to see the stability of developments in Central and East Europe and Gorbachev’s9 position in light of critics of his reform process endangered by thoughtless expressions of feelings of triumph. Bush and Baker are thus interpreting Gorbachev’s concerns correctly (cf. Gorbachev’s message to Bush on the night of 10/11 November, in which he said that he was “very concerned about the possibility of destabilisation”; similar reaction by Ambassador Kotchemassov10 in a meeting with Ambassador Walters11 in East Berlin on 11 November.) Referring explicitly to your telephone call (10 November), Baker underlined that the development in the GDR was also an achievement resulting from the united stance shown by the US and NATO (10.11. MacNeil/Lehrer, 12.11. Brinkley12). Secretary of Defence Cheney13 reacted in a similar, but more forceful way;

– concern that a more emphatic reaction would inevitably lead to the question of practical measures to support reform in the GDR, with financial implications – and at a time when the Administration was being criticised for not providing enough financial support for the reform process in Poland and Hungary.

– Bush and Baker’s characters and governing style based on a case-by-case approach to crisis management, which deliberately refrains from using far-reaching concepts.

The summit with Gorbachev on 2 and 3 December has become even more relevant on account of the events in the GDR. The Administration is doing everything it can to counteract the impression that it wants to make decisions over the allies’ heads at this summit on far-reaching arrangements on a postwar order in Central Europe. On the other hand, Bush’s and Baker’s reactions, as far as we have seen so far, merely hint that the West already has a concept for a European peace order and proven instruments for West East dialogue in the form of the Harmel Report14 and the CSCE process.

The Administration has not commented so far on the German side’s (Bahr15, Geiger16; Gaus17) proposal to hold a four-power conference on Germany. 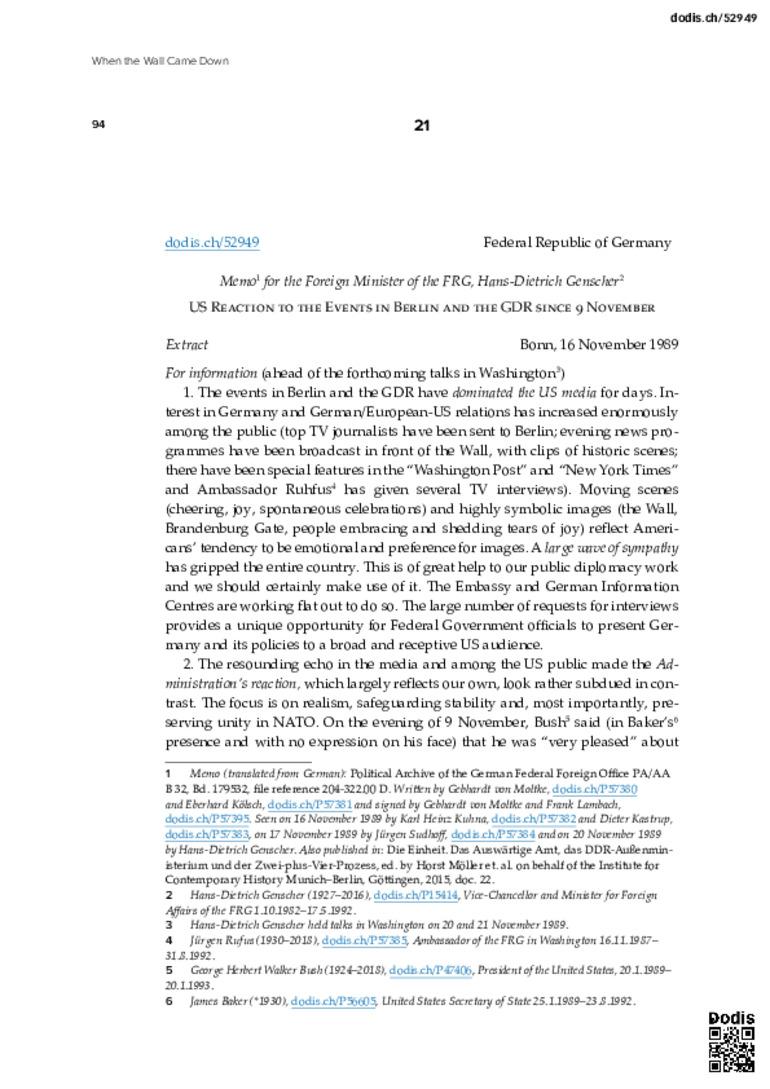 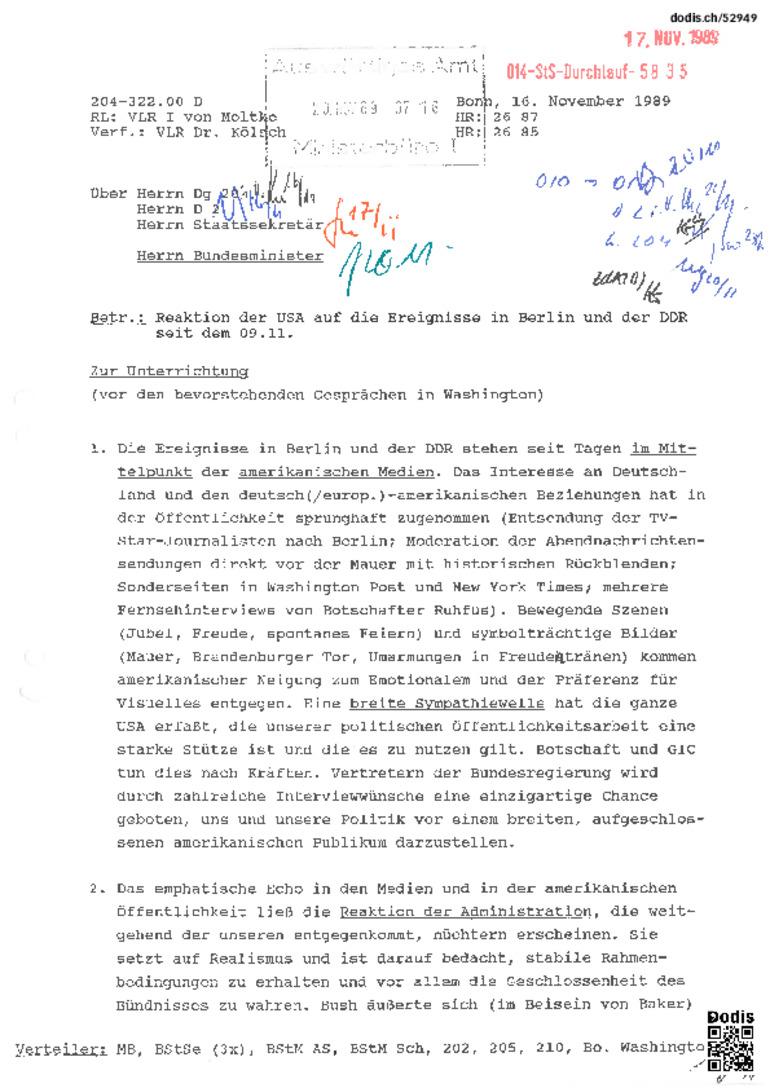 Persistent URL of this document: http://dodis.ch/52949