When the Wall Came Down. The Perception of German Reunification in International Diplomatic Documents 1989–1990 (Quaderni di Dodis 12), vol. 12, doc. 57

dodis.ch/52932 Memo1 by the Austrian Ministry of Foreign Affairs

In addition to the information of Dep[artment] II.1. (GZ. 22.17.01/173)2 the following should be noted regarding the current Soviet position on the German question:

1) The concessions made by President Gorbachev3 to Chancellor Kohl4 on 16 July go far beyond the expectations of those who ultimately considered Soviet consent to the NATO solution for a unified Germany under the prerequisite of a special solution for “East Elbia”5 possible. The solution agreed to by Kohl and Gorbachev in the Caucasus provides for the future, that is the period after the withdrawal of Soviet troops, to a limited extent only, a special military status for the territory of the present GDR, cf. the not entirely clear commitment of Kohl that no foreign troops will be stationed in this area. In contrast, all other areas of Germany as a whole will engage in a complete security policy integration. (The last three issues of the prestigious American magazine “Foreign Affairs” include a series of articles from known American specialist authors – Kirkpatrick6, Mc Bundy7, etc. – who all indicated that they did not expect a consensual NATO solution.) It therefore seems legitimate to question the reasons why the attitude of the Soviet Union, or – more accurately – Gorbachev, went beyond all positive expectations:

2) The position taken by Gorbachev can on the one hand be explained as the result of a combination of newly confirmed domestic policy strengths of the Soviet President having “won” his party congress, and on the other hand the recognition of foreign policy weaknesses in his country: Fully aware that the confirmation of his (currently) unchallengeable role had increased his foreign policy scope, Gorbachev – apparently without further coordination with other still relevant forces (military, etc.) – and perhaps at the last possible moment successfully attempted to gain as much capital (figuratively as well as in the true sense of the word) as possible out of the Soviet withdrawal from East Germany and the renunciation of older positions of the Soviet Union’s policy on Germany (insisting on the neutrality of a unified Germany).

3) Gorbachev secured at least the following advantages for his country:

– The reduction of the total German force level to 370,000 men and thus (including the manning level of the NVA) an overall drop of 45%;

– The obvious assumption by unified Germany of the – substantial – costs of Soviet troop withdrawal (see letter of intent concerning agreement on effects of DM-conversion);

– Further active efforts by the FRG to gain Western aid for the Soviet Union;

4) The agreement between Kohl-Gorbachev has been completed without informing the Western partners in advance, thus also signaling a future autonomy of German foreign policy.

5) President Gorbachev could speculate with the idea that after a Soviet troop withdrawal the negative sentiment towards foreign military presence could generally grow further in the FRG and thus perhaps a traditional goal of Soviet policy could still be achieved in the longer term.

6) In total, the agreements of 16 July are – as Gorbachev himself says – a matter of successful “Realpolitik.” Whether the Soviet President will succeed to domestically secure this result, will also depend on the further reaction in the West: too loud a triumph may be harmful, but on the other hand, in light of the Germans “going it alone” (see above) it is not to be expected.

5
A term subsuming all former Prussian territories East of the Elbe.↩ 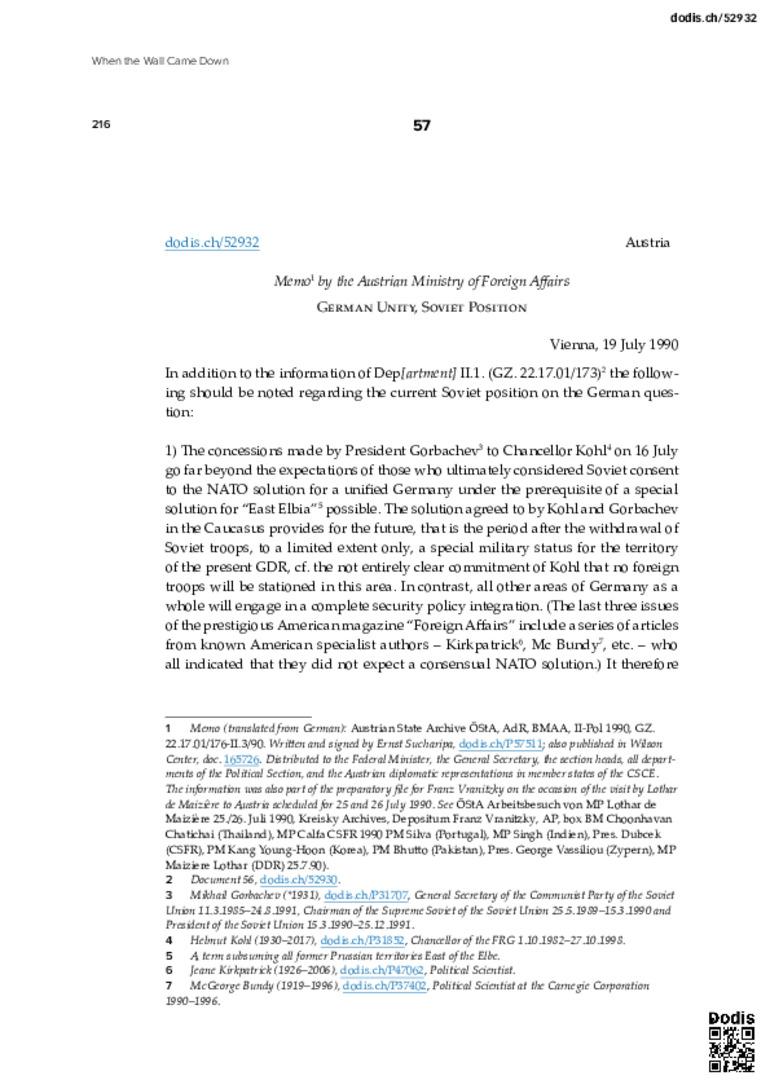 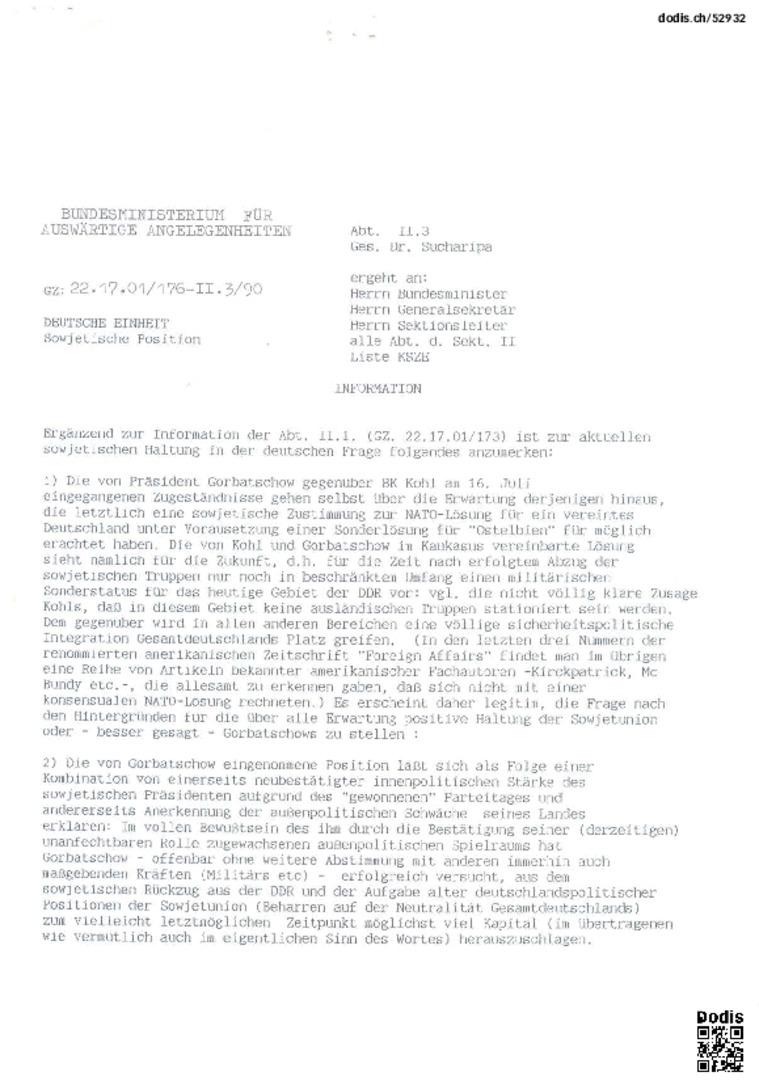 Persistent URL of this document: http://dodis.ch/52932