Language: Dutch
Situation in GDR
Telegram (T) • confidential
Report on the economic difficulties for industry in the FRG evolving from the German reunification process, while in the GDR government, industry and public services are in terminal decline.
How to cite: Copy

When the Wall Came Down. The Perception of German Reunification in International Diplomatic Documents 1989–1990 (Quaderni di Dodis 12), vol. 12, doc. 60

The first economic counsellor4 had a conversation with Ministerialdirektor Dr. Becker5, Director General for Industry at the Federal Ministry of Economic Affairs and also leader of the Leitungsstab Deutschland, in which all economic aspects of the German reunification were coordinated.

Dr. Becker acknowledged that industry in the GDR is in big trouble, but this was also generally expected. On questions regarding the economic background of the increasingly rapid acceleration of the unification process Dr. Becker replied as follows.

Both the government and the civil service apparatus in the GDR are apparently functioning worse and worse, now that real difficulties arise. The government started with enthusiasm at the time, but is showing less and less effectiveness. The ministers do not do much other than catalogue what kind of money they all need. The Minister of Finance does nothing apart from making sums for one thing and another and sending them to Minister Waigel6 with requests for more money. The Minister of Finance of the GDR is thus no counterweight to the demands of the other departments. Everything is shifted on to the FRG. The civil service is in fact still the old Honnecker7 apparatus. Becker did not want to claim that all officials are ideologically motivated to thwart progress, but at the very least they lack insight into the market economy. Furthermore, they are not used to making decisions, for fear of being held financially responsible for policy actions (sale of land to investors) and finally they are completely uncertain about their position. Becker said that of the 5,500 employees at the GDR Ministry of Economic Affairs, only some 400 would be taken on by the Federal Ministry of Economic Affairs. The rest will soon be dismissed, a perspective that is not exactly motivating.

If one arrives at the communal level in the command chain, individual responsibility or initiative is completely absent. Here orders from above are still awaited. Because of this, the government guidelines at work level remain virtually unnoticed, much to the detriment of investment activity from the west. If one adds to this picture the Volkskammer, which time and again passes laws that seriously impede entrepreneurship resp. investment (limitation of the possibilities for workforce reductions etc.), then it becomes clear, says spokesman, that real positive economic development in the GDR awaits political unification. This must be achieved as soon as possible, the sooner the better. This will of course not solve all problems immediately but will enable a start to build up from.

In this context he also considered it of great importance that reunification coincides with elections taking place, so that the new government (hopefully with a solid majority) can intervene effectively. A reunification in September or October, but with elections on 2 December is not very attractive for the Federal Government, according to the speaker, also for reasons other than strictly electoral ones. It will immediately be held accountable for an increasingly poor economic situation but will not really be legitimized for the GDR population and will, moreover, be powerless just before elections, like all democratic governments. The SPD naturally sees tactical advantages in such a constellation.

Counsellor then brought the conversation round to the activities of the Treuhandanstalt8 and the issue of a threatening “liquidity collapse”. Spokesman admitted that indeed the money appears not to circulate in the GDR. Wages received are spent on imported goods from the west. The companies in the GDR (i.e. those companies that are in the hands of the Treuhand) thus receive no income. Moreover, what they still sell is not or in any case not immediately paid for. Therefore, there must be a new injection of liquidity every month, which the banks will only do if the Treuhand guarantees this. Since in this so-called watering can9 method all companies receive credit, including those that will almost certainly go bankrupt in the coming months, the need for selection becomes increasingly urgent. Dr. Becker emphasized that this is absolutely necessary to quickly rid the companies of the already existing view that one only needs to hold up a hand. Spokesman therefore expected many applications for bankruptcies in the near future from manifestly hopeless cases. On the other hand, the potassium mines etc., for example, which certainly belong to the hopeless category, will be spared for a while because they provide 15,000 jobs in a region where practically no other employment is available. Gradually one must try to get a grip on the flow of sub‑ sidies.

The rise in unemployment that is already detectable has not so much to do with company closures, but is primarily the result of reducing the infamous “overstaffing”. Many inspectors and other unproductive forces are now made redundant. All this was foreseen. Spokesman was surprised that this is now causing such astir in the press. Everybody has known for months that if unemployment in the GDR remains below one million at the end of 1990, one can10 speak of a development that is better than expected.

5
Jürgen Becker (*1953), dodis.ch/P57577, Director General for Industry at the Ministry of Economic Affairs of the FRG.↩

8
Trust Agency, established 17 June 1990 by the GDR authorities to privatize East German enterprises in the process of reunification.↩

10
Handwritten note: “could have spoken”, because now already 1.2 million unemployed!↩ 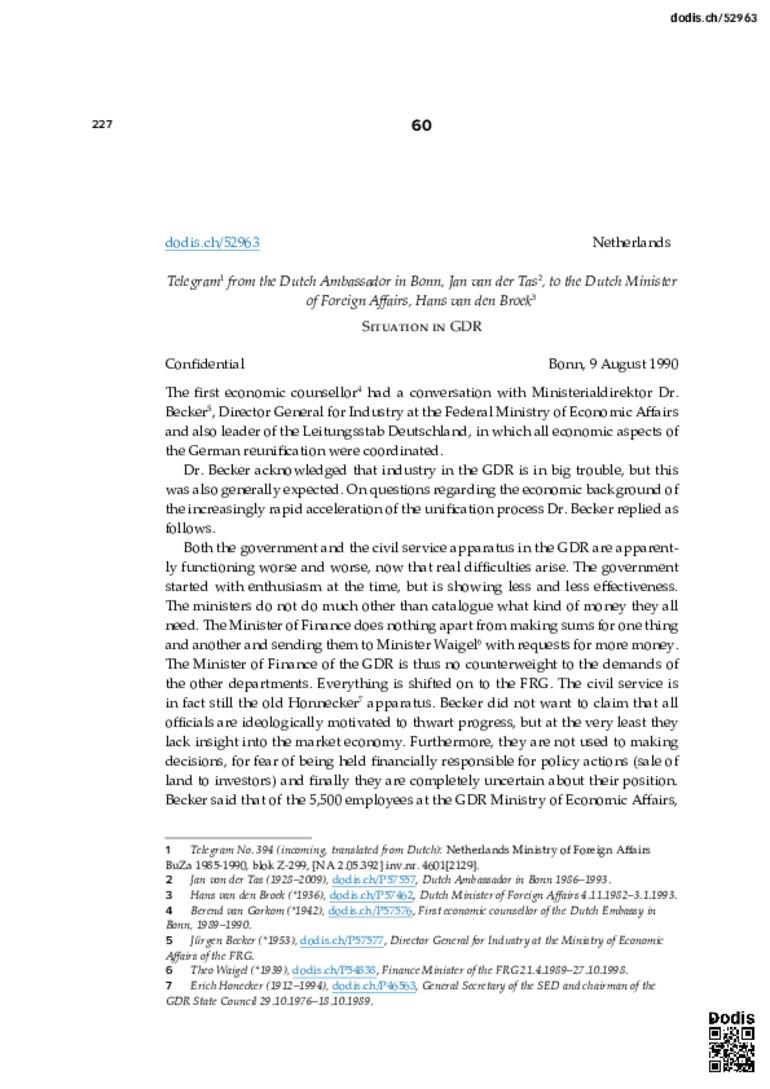 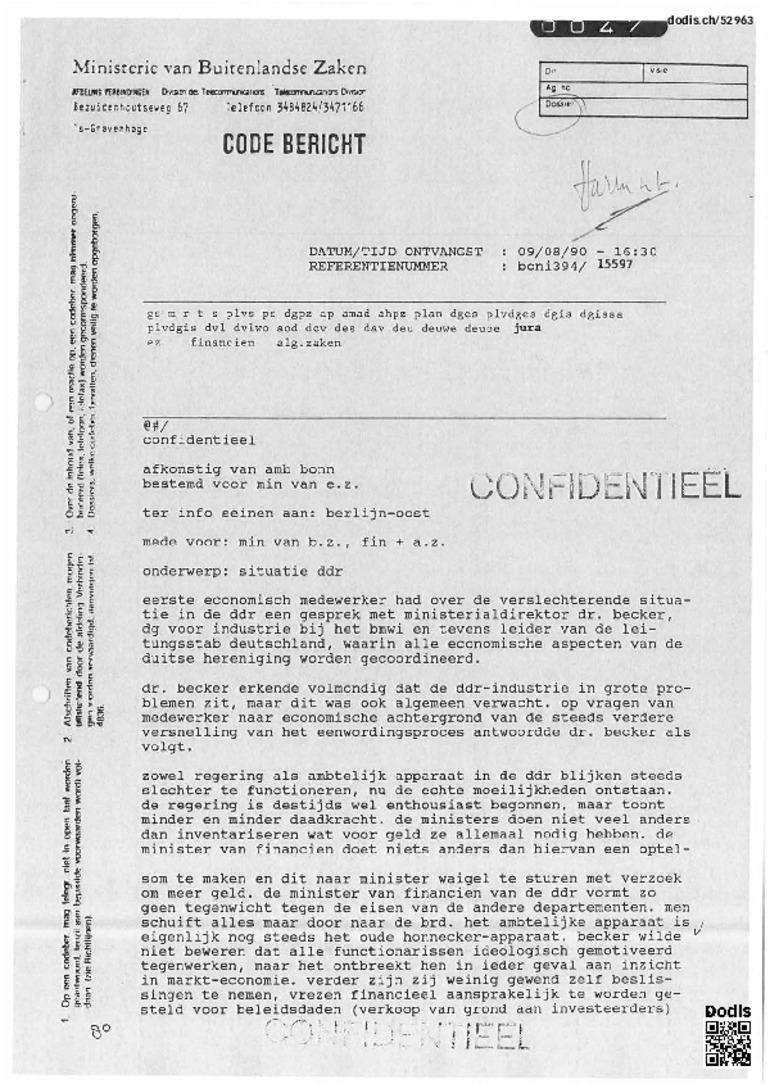 Persistent URL of this document: http://dodis.ch/52963