When the Wall Came Down. The Perception of German Reunification in International Diplomatic Documents 1989–1990 (Quaderni di Dodis 12), vol. 12, doc. 27

dodis.ch/52953 Telegram1 from the Ambassador of the FRG in Paris, Franz Pfeffer2, to the Ministry of Foreign Affairs of the FRG

I herewith present a report by the Embassy’s Political Section on the French position on the German Question. The focus is on critical aspects of which our Head Office should be aware.

Based on my experiences in colloquia and talks, I note the following:

1. “La France profonde” (“deep France”) of the provinces and simple, decent people has reacted in a very healthy way to the fall of the Wall and developments in the GDR. Joy, solidarity and willingness to help can be felt in the letters we have received. These people are also the reason for our good ratings. This part of France is impressed by the resolve and moderation that allowed the peaceful revolution to be achieved without bloodshed. Young French people feel the same way or at least a large percentage of them do.

2. The political class in France is full of doubt and scepticism. Concerns range from a resurgence of Bismarck’s3 Reich to German economic predominance. But only a very few people say they do not want German reunification. Most are waiting to see what will happen and playing for time. As always, Mitterrand4 is able to see furthest. He is apparently convinced that there will be reunification, but would like to help guide the process in an orderly fashion, in particular to ensure that the European integration process is not adversely affected.

We should not underestimate those in the French civil service who would like to put the brakes on further developments. These people also cause difficulties for us in other areas (from talks on disarmament to the project on integrated Franco-German embassies). Only a few civil servants are as pro-European and convinced of the need for Germany and France to take a joint stance as Secretary General Bianco5 (Elysée) and Permanent Under-Secretary Scheer6 (Quai).

3. Almost immediately after the “euphoric phase” of the fall of the Wall, the media switched to criticism and concern. At times, it is downright malicious, with talk of the danger of a re-emerging Third Reich and the rebirth of anti-Semitism. The media gives the impression that the conditions for reunification must be dictated to us again (it must be peaceful, democratic, in a European context, accepted by the Four Powers and recognise the Oder-Neisse Line).

4. Our public diplomacy efforts are now of crucial importance in France. I have been able to present our position several times on television and on the radio. Colloquia are held frequently and the German problem is the topic of every conversation.

The more calmly and controlled we present our views, the sooner we can make use of the situation and the more respect we will receive (as a western extension of the moderation shown by our compatriots in the East). Depending on the forum, the important thing is to present the principles of our policies in a simple or more subtle way, namely that the shared goal with France and the other Western partners is to overcome the division of Europe and thus also the division of Germany (as part of a peaceful evolution, avoiding destabilisation, exercising the right to self-determination in the GDR, and speeding up the West European integration process in order to maintain a firm stance and to be able to help the reforming countries in the East in an effective way).

Presenting our views in this way always enables us to deflect further argument. Particularly when speaking to a young audience, such as students, I have received resounding applause for such points.

Since the summer, the position taken by French officialdom on the “German Question” has become increasingly rigid as events in and around the GDR have accelerated; under certain circumstances, this position could prove to be a burden on Franco-German relations for a longer period of time, not least because French motives are wide-ranging and the country’s stabilisation endeavours can not only be seen from the perspective of a current transition crisis that is regarded as potentially dangerous.

It is currently unclear whether France will manage to bring itself to play a constructive role in an emerging trend towards a stronger German position in Europe and to make use of the privileged Franco-German relationship in this regard or if it will try to postpone such a development for as long as possible as allegedly not being in its interest. In the latter case, this could give rise to longer-term problems in official Franco-German relations. Should these problems go on for longer, they could also rub off on the deeper layers of Franco-German relations that have so far not been affected. This type of development must be avoided.

At the same time, we should work on the French media, but remain aware of the limits of our ability to shape French opinion towards us in France. We should also explore to what extent the various levels of the comprehensive and special Franco-German consultation mechanism can be used more intensively, e.g. for joint discussions on the question of how far the current developments in Europe will affect security policy. 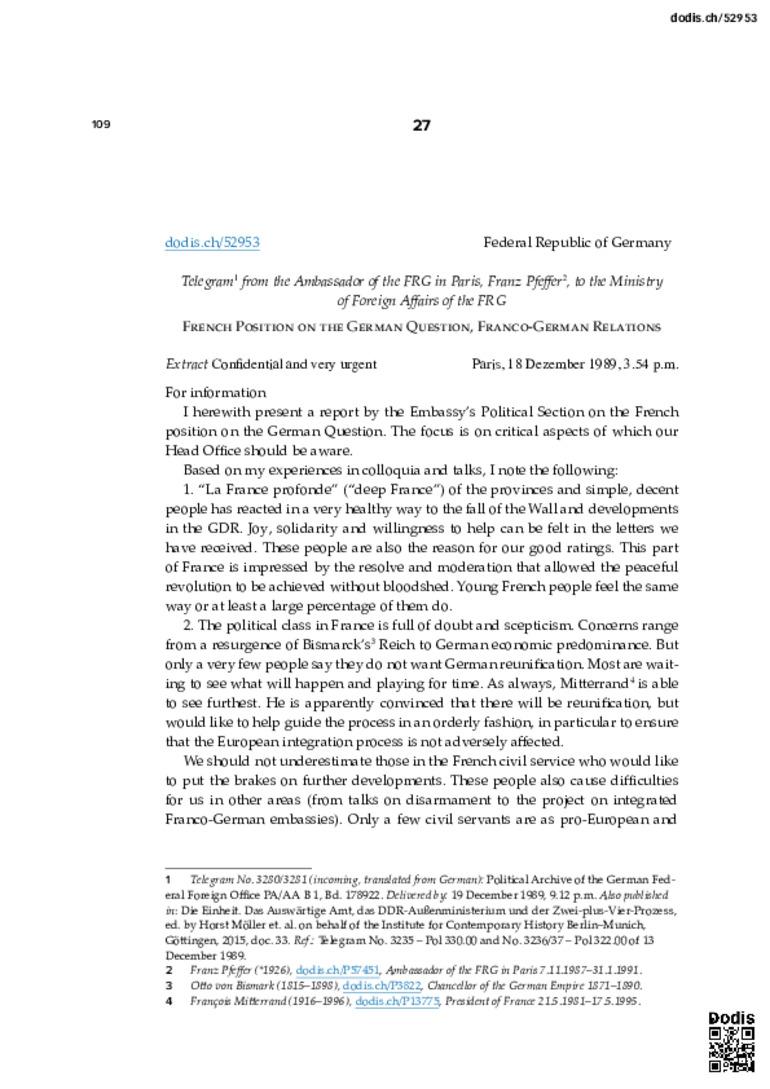 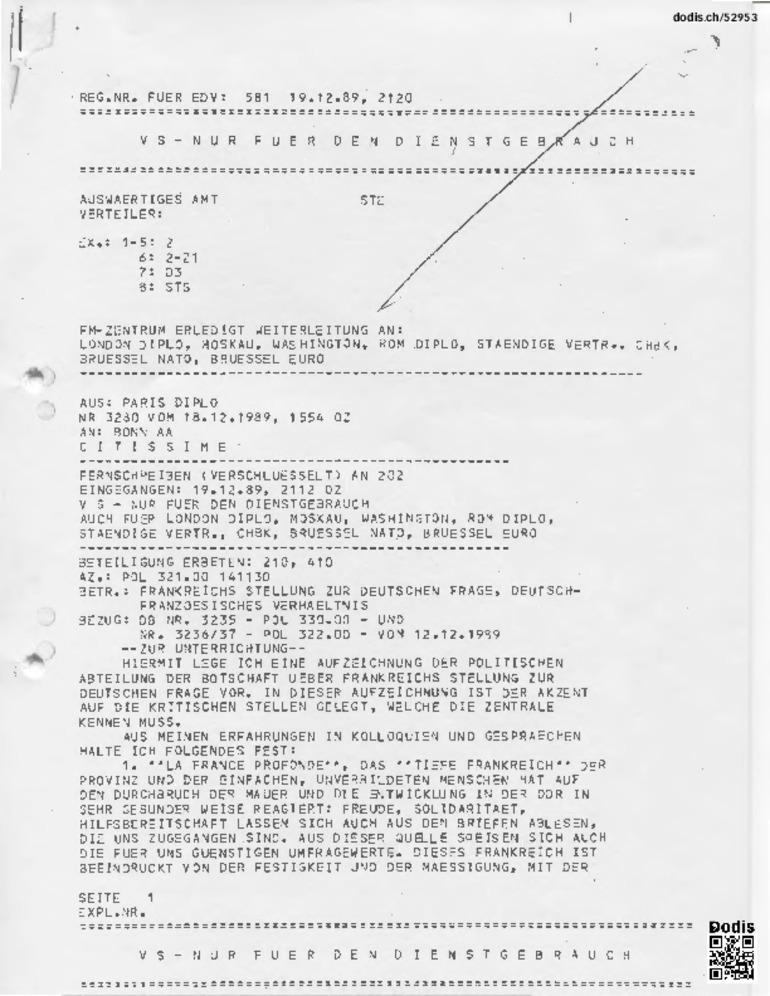 Persistent URL of this document: http://dodis.ch/52953