Language: Hebrew
Telegram (T) • secret
Report on a discussion with Wolfgang Mischnick of the FDP on his impressions of a visit to East Berlin; Israel's concerns are voiced.
How to cite: Copy

When the Wall Came Down. The Perception of German Reunification in International Diplomatic Documents 1989–1990 (Quaderni di Dodis 12), vol. 12, doc. 3

dodis.ch/52942 Telegram1 from the Israeli Ambassador in Bonn, Benjamin Navon2, to the Israeli Foreign Ministry

Today I had a long talk with Wolfgang Mischnick3, the chairman of the FDP faction. Mischnick returned 48 hours ago from a visit to East Berlin and was in fact the first Western politician to meet with Egon Krenz4 and the East German leadership.

In interviews with the media he spoke of his optimistic impressions with regard to expected developments in East Germany.

When talking to me, he admitted that he had taken this line not so much because he believes it is actually correct, but because he tends to believe that in this case impressions and public reports about them can influence the process. His impression is that there is indeed an atmosphere of change and a strong expectation [of it] among the public, but in private he would not dare to predict that this atmosphere of change will become reality.

He mentioned that Krenz and Gorbachev5 had studied at around the same time at the senior Party college in Moscow, and it is not impossible that this will influence Krenz. He emphasized repeatedly that in the USSR change is coming from the top down, whereas in East Germany it is coming from below. It is being adopted – even if only partially – by the local functionaries who are trying to pass it up the line, but it is not certain to what extent this will go through. In his opinion a process like that taking place in Hungary or Poland is not to be expected, due to the significant difference caused by the German aspect.

First, [concerning] the justification for the existence of a second German state if it is not socialist and second – the question of a possible reunification.

I told him about the Israeli-Jewiss dilemma with regard to East Germany, especially that country’s unwillingness to relate to its past. I also described the traditional hostility of East Germany towards Israel and its unsuccessful efforts to gain support in the U.S. by displaying a seemingly positive attitude to the restoration of a cemetery and a synagogue and the employment of a rabbi for the tiny Jewish community in East Berlin. He told me that at the end of January 1990 he would visit East Germany at the head of an FDP party delegation and we agreed that we would discuss the latter subject before he leaves. 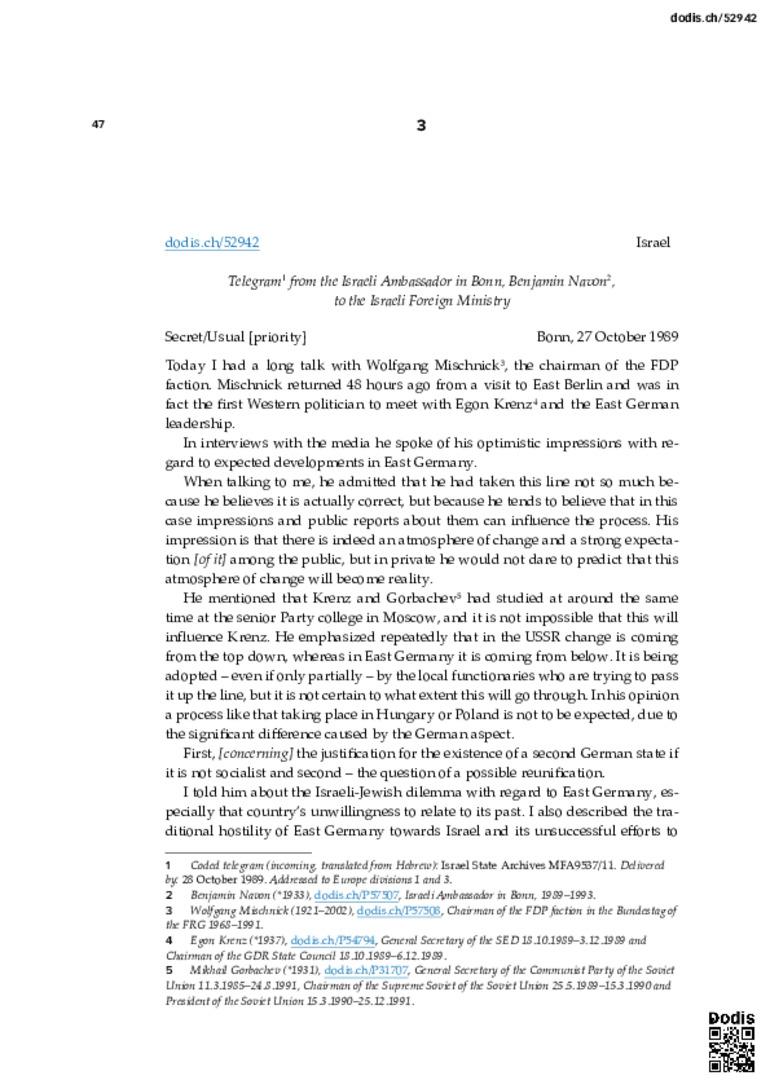 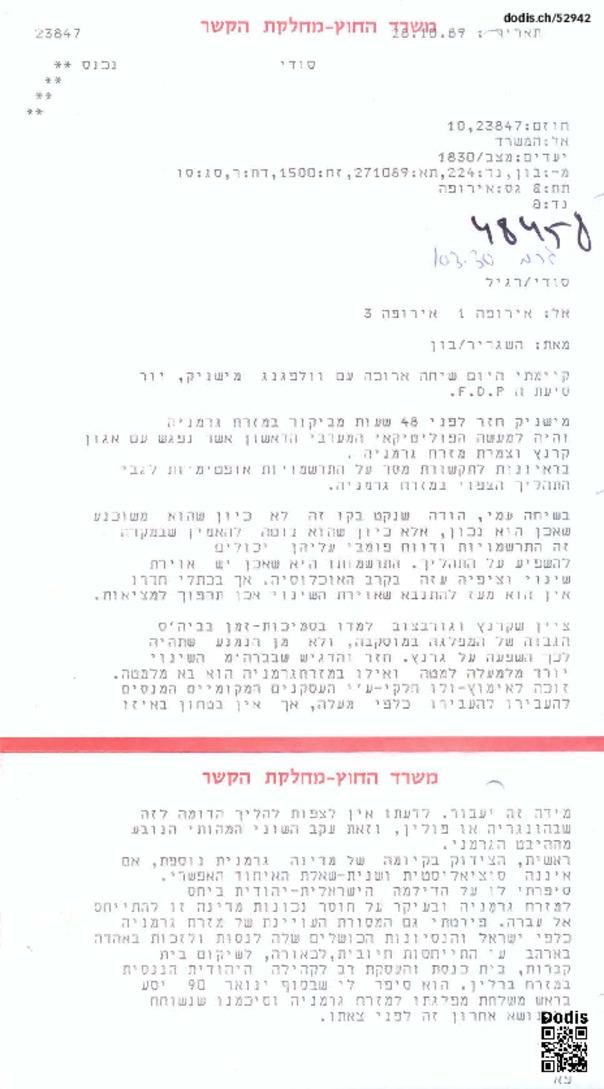 Persistent URL of this document: http://dodis.ch/52942