Language: English
No. 12. The German Question: Our Public Line
Telegram (T) • confidential
Concern at the perception of the UK attitude towards German unity is expressed.
How to cite: Copy

When the Wall Came Down. The Perception of German Reunification in International Diplomatic Documents 1989–1990 (Quaderni di Dodis 12), vol. 12, doc. 29

dodis.ch/52925 Telegram1 from the British Ambassador in Bonn, Sir Christopher Mallaby2, to the British Secretary of State for Foreign and Commonwealth Affairs, Douglas Hurd3

The German Question: Our Public Line

1. Despite our supportive line on the German wish to achieve unity through self-determination, the UK is perceived here as perhaps the least positive of the three Western Allies, and the least important. Need to present our policy in the most positive light we can. Your visit to East Berlin and the GDR an opportunity.

2. I remain concerned that despite our consistent support for the principle of German unity through self-determination, the UK is perceived here as opposing, or at least wishing to brake, reunification. The French, on the other hand, whose doubts seem if anything stronger than ours, manage to maintain a more positive public image (Mitterrand’s4 remarks in Kiev notwithstanding5). The US are perceived as the most supportive of German aspirations even while laying down conditions for German unity.

3. Two recent British statements have stuck in German minds and coloured their perception of our policy. The first was your comment in Berlin on 16 November that German unity was not on the agenda6. This was true at the time. But Kohl’s7 ten point statement on 28 November put it on the agenda, even if without a timetable. The second was the Prime Minister’s8 statement in Brussels on 1 December that reunification should not take place for ten to fifteen years9. The latter continues to be quoted by German commentators as evidence of a negative and mistrustful British attitude.

4. As against the background of Bush’s10 policy of a “Europe whole and free”, Baker’s11 four conditions for German reunification have been well-received here, because of the spirit that is thought to lie behind them and because they are seen as designed to facilitate, rather than prevent, German unity. The same cannot be said of Mitterrand’s contributions. In Bonn on 3 November he said he had no fear of German reunification, which posed no problems for France. Three days later in Kiev he said reunification “is not a question for now” and that the question of frontiers should not be raised again. The fact is that as the FRG’s best friend and most important European partner, France can get away with a great deal. It is characteristic that Kohl should have visited Mitterrand in south-west France on 4 January to mend fences12. The UK by contrast is at present seen as neither especially important nor as well disposed. Both aspects can reduce our influence on the FRG at this critical time.

5. Your visit to East Berlin and the GDR which is likely to be widely reported here, provides an important opportunity to try to put a more positive spin on our presentation13. You could use the Strasbourg/NATO formulae (East Berlin telnos 003 and 00714) but present them as a statement of British policy. You could also draw on other elements in the public line recently produced by the Department in consultation with this Embassy15.

5
President Mitterrand had met President Gorbachev in Kiev on 6 December 1989. At a joint news conference he had stated: None of our countries, and especially one whose weight is so great and whose geographical position is such, can act without taking into account the balance of Europe.↩

6
In fact Douglas Hurd had used this formula on at least three previous occasions: in a press conference in The Hague on 9 November 1989, a BBC World Service interview on 10 November 1989 and a BBC Radio interview in Bonn on 15 November 1989.↩

9
In fact at the NATO Heads of Government meeting on 4 December 1989.↩

14
The European Council’s Strasbourg declaration read: We seek the strengthening of the state of peace in Europe in which the German people will regain its unity through free self-determination. This process should take place peacefully and democratically, in full respect of the relevant agreements and treaties and of all the principles defined by the Helsinki Final Act, in a context of dialogue and East-West cooperation. It also has to be placed in the context of European integration. The Strasbourg formula was repeated in the communiqué issued at the end of the North Atlantic Council.↩

15
Charles Powell (*1941), dodis.ch/P57468, Private Secretary to the British Prime Minister, commented in a letter to the Foreign and Commonwealth Office dated 9 January 1990: The Prime Minister has seen Bonn telegram number 12 commenting on our public line on the German question. She thought it showed a lack of understanding of our policy which she finds alarming. She would like to see any reply before it is sent. UK National Archives FCO 33/10893.↩ 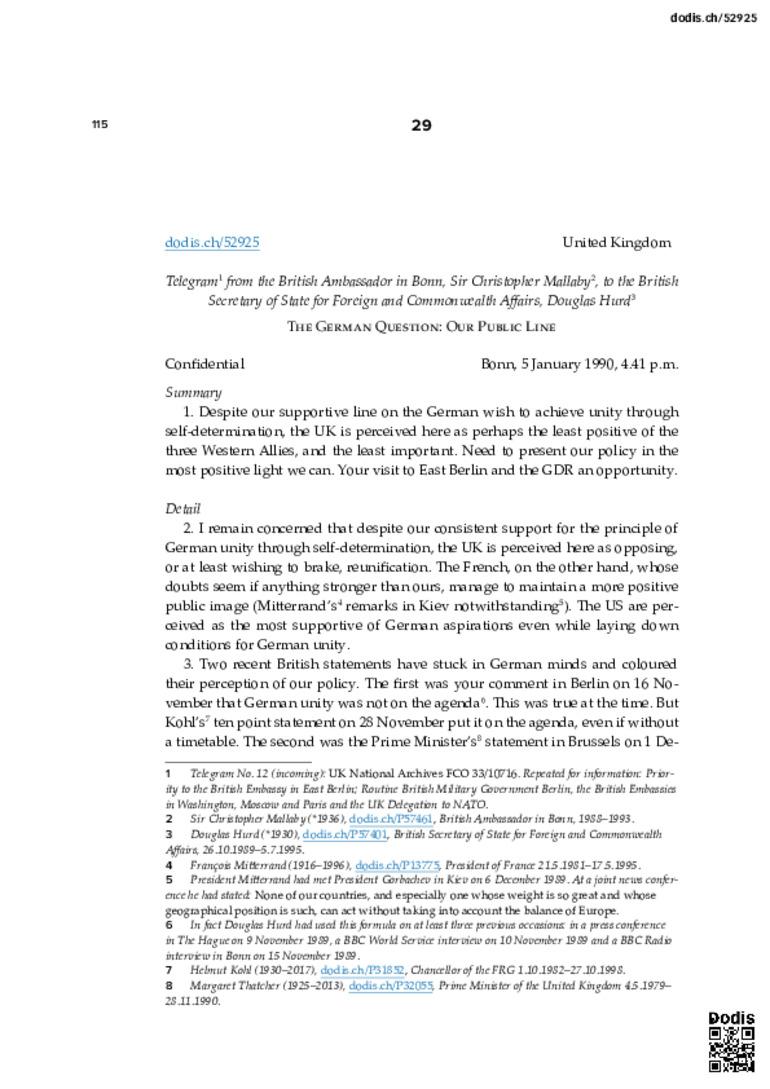 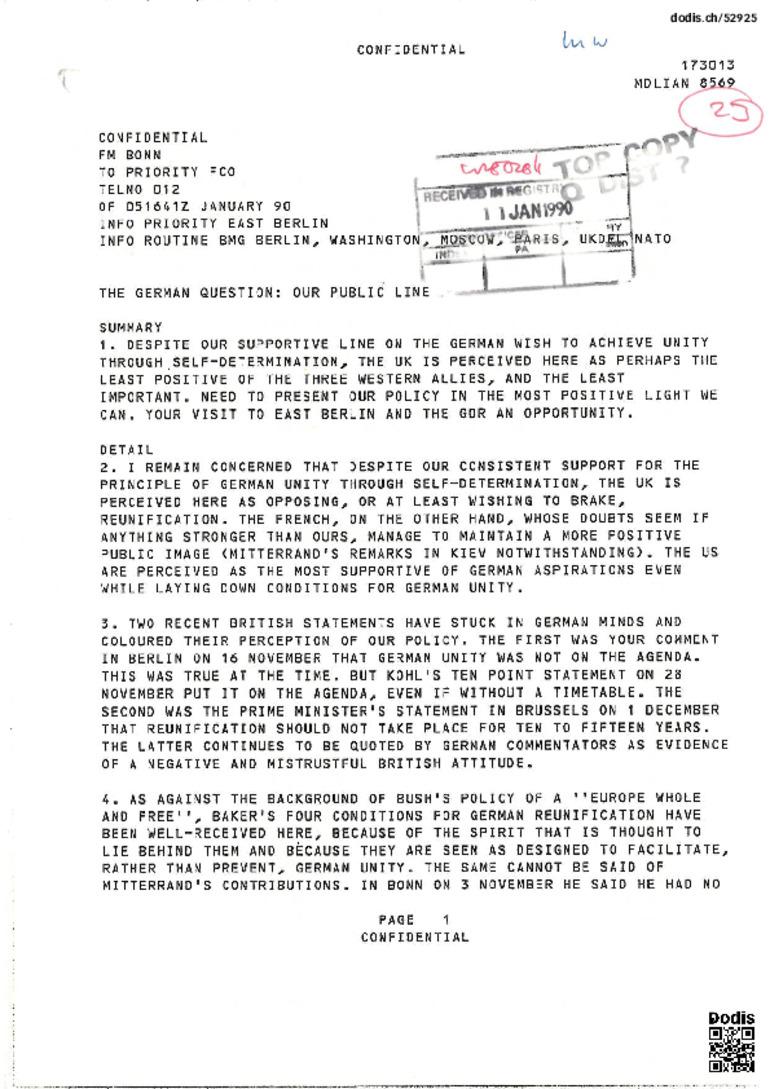 Persistent URL of this document: http://dodis.ch/52925