Language: English
No 381. Future Developments in the GDR
Telegram (T) • confidential
Reflections on political life in the GDR in the immediate aftermath of the opening of the Berlin Wall.
How to cite: Copy

When the Wall Came Down. The Perception of German Reunification in International Diplomatic Documents 1989–1990 (Quaderni di Dodis 12), vol. 12, doc. 13

dodis.ch/52923 Telegram1 from the British Ambassador in East Berlin, Nigel Broomfield2, to the British Secretary of State for Foreign and Commonwealth Affairs, Douglas Hurd3

Future Developments in the GDR

2. It is not for me to comment on the effect on West Berlin and the FRG of the influx of some three million East Germans over the past four days. But viewed from East Berlin the last four days mark a decisive change in the political life of the GDR.

3. Even though 4.2 million visas were issued since 9 November, only 10,144 were for emigration according to GDR figures. This is an encouraging ratio for the leadership, and indeed there are reports of people returning. But the situation remains fluid, the exodus could begin again at any time if the leadership started to resile on the numerous promises they have given in the last few days about new policies. The Politburo will have to learn to live under this sword of Damocles.

4. The breaching of the Berlin Wall, the opening of a new crossing at Potsdamer Platz, the scene of the 1953 uprising and the heart of old Berlin, by the mayors of East and West Berlin4, are deeply symbolic acts. The millions who crossed into West Berlin and the FRG since 9 November are fundamental political facts for the future of this country.

5. The tears and euphoria will die down and no doubt aggravations and resentments will surface in some areas but first-hand knowledge of the other German state and of their friendly reception there over this weekend has spread very widely among the population here and not just as before, among the privileged few with relatives in the West. This cannot be taken away again without risking an overwhelming political reaction.

6. Krenz5 may claim as he did on GDR television on 11 November after talking to Kohl6 and agreeing to meet “soon”, that what had happened were sovereign decisions by the GDR and that for him reunification was not on the agenda. But power has passed in substantial measure to the people and it is they who from now on will increasingly decide the future of this country. How they will decide is not yet clear.

7. Unless a cataclysm occurs in the Soviet Union and sets back with it the reforms in Poland and Hungary I cannot see how a rapid process of growing together of the two German states can be avoided. Krenz may be replaced by Modrow7, who may succeed for a time in making the party popular again. There is wide support among the bloc parties as well as the protest groups for the principles of socialism variously defined. But the present system of planning the economy based on widespread public ownership cannot satisfy the peoples, demands sharpened as they will be by increasing familiarity with West Berlin and the FRG.

8. Whether in a dramatic move to stave off economic collapse in the next few months or in a more gradual process, the strength of the FRG economy acting on the structural and systemic weaknesses of the GDR is bound to have a profound effect. (I think it impossible that the structural alterations to the GDR’s economy can take place by the time Kohl and Krenz have their first meeting in November/December. And without these alterations Kohl has said, quite sensibly in my view, investment from the FRG will not be attracted to the GDR. The threat of imminent economic collapse looks to be a more likely trigger for West German assistance than slow structural change.)

9. I do not think it fanciful to see something of the same process happening on the political front with existing links between parties in East and West Germany. The CDU (West) has just begun to have contact with the CDU (East). The same is true for the SPD (West) and the SPD (East, still unofficial) whose membership of the socialist international the former will support. The FDP (West) has long had links with the LDPD (East, “liberal”). The SED will derive little benefit from its close contacts with DKP (West) and the SEW (West Berlin).

10. There will no doubt be many twists and surprises in the way events actually work out between the two German states. But from the point of view of our policy towards the GDR we should take note of underlying realities which the events of the last few days and weeks have exposed so clearly. 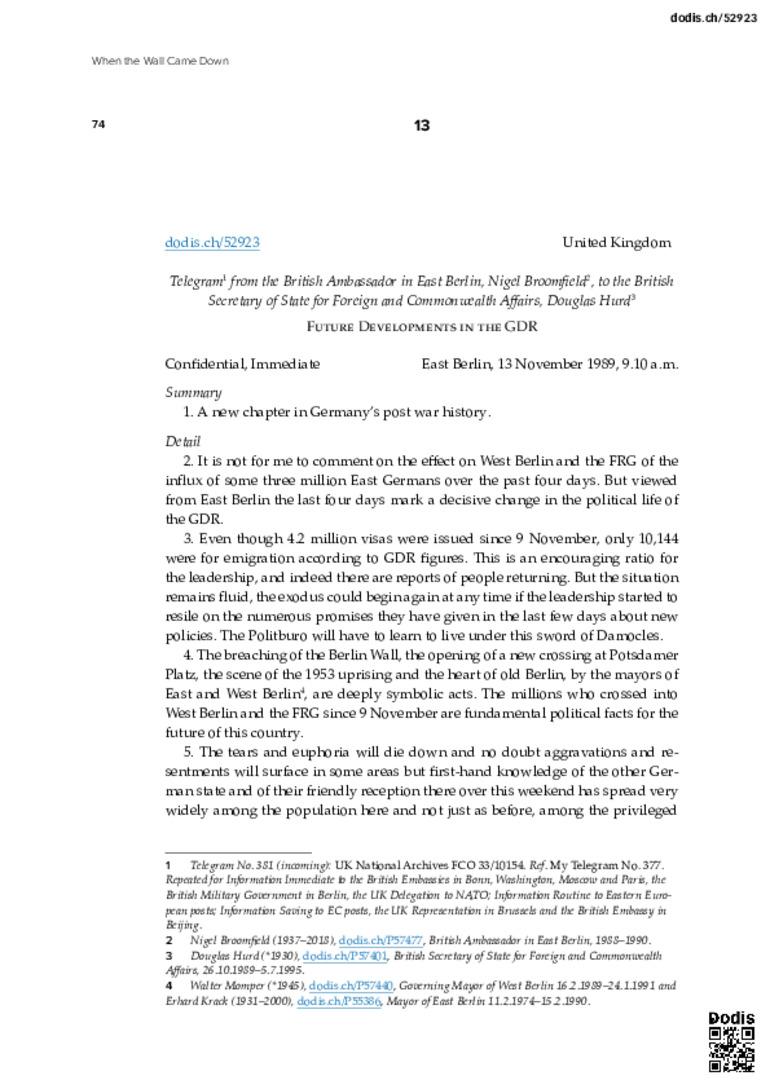 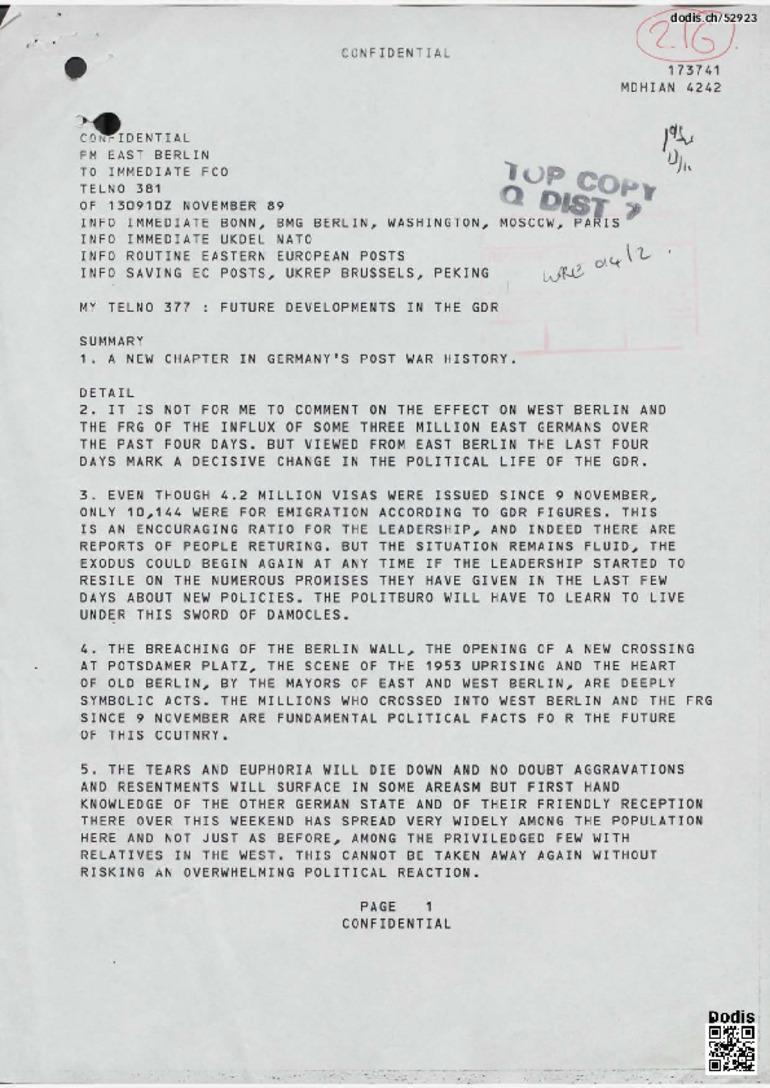 Persistent URL of this document: http://dodis.ch/52923