Language: Turkish
No 105/2
Telegram (T) • urgent
News obtained from local and Western press on 10th and 11th of November regarding the fall of the Berlin Wall.
How to cite: Copy

When the Wall Came Down. The Perception of German Reunification in International Diplomatic Documents 1989–1990 (Quaderni di Dodis 12), vol. 12, doc. 11

dodis.ch/53320 Telegram1 from the Turkish Ambassador in East Berlin, Metin Mekik2 , to the Turkish Ministry of Foreign Affairs

1) Following the opening of the Berlin Wall, the important information and observation gathered by our embassy from the western and local media concerning the recent developments which occurred in Berlin during the night of 10 November and this morning (11 November) are summarized as submitted below:

On 10 November, more than 40 thousand citizens of the German Democratic Republic crossed to West Berlin. The crossing process continues at a rate of 100 vehicles and 3,000 people per hour. It is estimated that approximately one million East Berlin citizens will cross to West Berlin for touristic purposes during the weekend. The police of the German Democratic Republic are providing the necessary convenience on the border and around the Wall, and their demeanor is moderate and pleasant. The Berlin subway has been opened.

Over the last 24 hours, a mere 2,500 people crossing to the west indented for permanent migration.

The citizens of East Germany are being welcomed in a festive atmosphere by their cognates in West Berlin. The traffic police are not fining them for parking illegally (negative), city-dwellers are distributing gifts, and the banks in the Federal German Republic are distributing an allowance of 100 DM to each arriving guest. In the bars of West Berlin, the East German Mark was also accepted last night.

At the border gates along the Berlin Wall, there is a stampede. All the families seeking to cross over together with the intention to “visit” formed queues of tens of thousands of people at the train and subway stations by the border gates.

The west and east side of the Berlin Wall, built 28 years ago over one night and responsible for the deaths of 71,000 innocents trying to escape from the east over the course of its existence, was demolished during the night of 10 November 1989 under the supervision of engineers from the German Democratic Republic, opening the way for easy transits.

In addition to these gates, four additional gates will be opened on Tuesday, 14 November. It was indicated that the number of gates for crossing to West Berlin would be increased from 13 to 31. It has been suggested that the historic Brandenburg Gate will also be opened; thousands of Berlin’s youths are sitting on the Wall at this point and protesting.

During the night of 10 November, Helmut Kohl3, the Prime Minister of the Federal Republic of Germany and Willy Brandt4, who was the mayor of West Berlin when the Berlin Wall was built in the summer of 1961, arrived in Berlin and made speeches in front of the Wall.

In his speech, the Prime Minister of the Federal Republic of Germany said “we are one nation, let’s struggle together.”

2) During the meeting of the Central Committee of the said party, decisions concerning the realisation of free democratic elections, ensuring a secret ballot, providing for the freedom of press and submitting the secret police for trial were taken.

Thanks to the maturity of the people of the German Democratic Republic, who are aware of having suffered hard times and the moderate and rationalist attitudes of their leaders, the incidents that are occurring are adding momentum to the shift towards democracy. 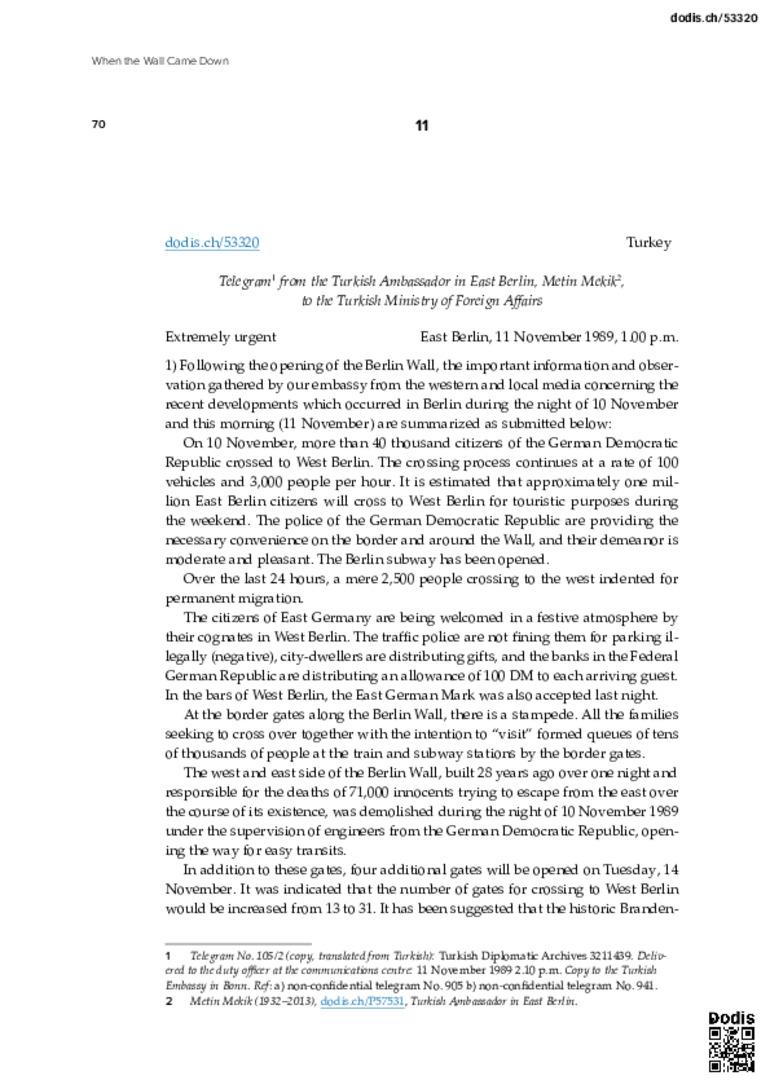 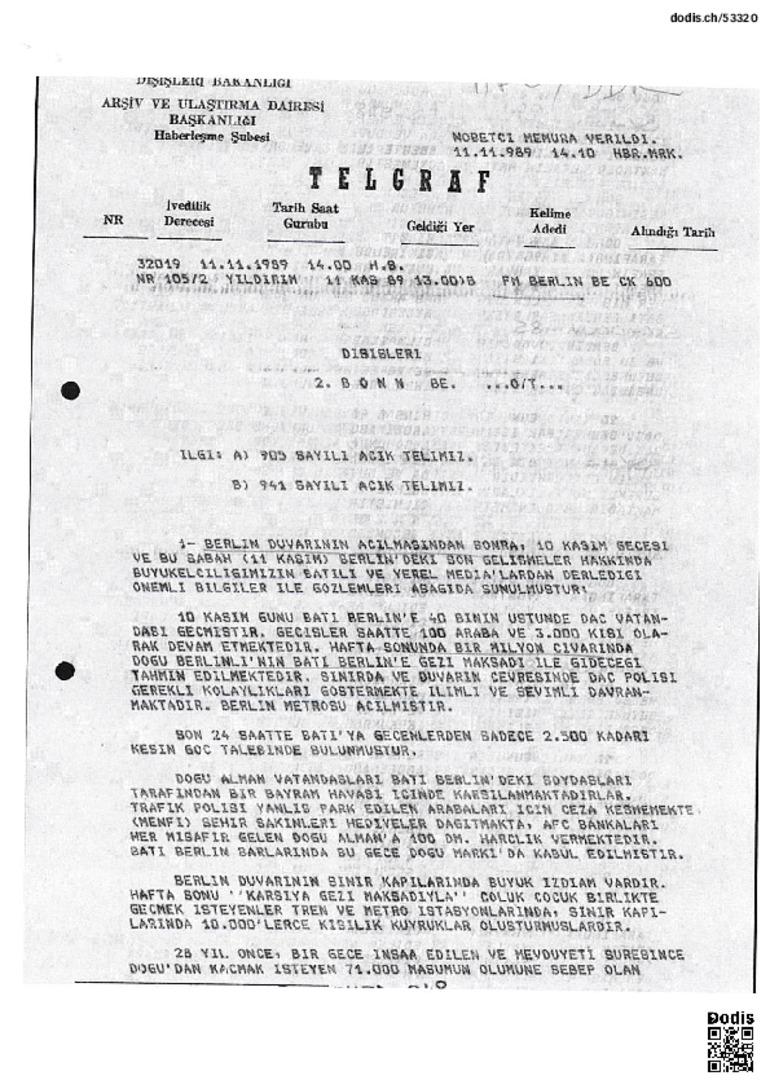 Persistent URL of this document: http://dodis.ch/53320