Language: Polish
Memorandum Concerning the Citizens of the German Democratic Republic who Remain at the Embassy of the Federal Republic of Germany in Warsaw
Memo (No) • confidential
Information concerning Polish-West German talks about over 50 East German citizens staying at the West German Embassy in Warsaw. How possible solutions could impact Poland’s relations with the GDR and the FRG are discussed.
How to cite: Copy

When the Wall Came Down. The Perception of German Reunification in International Diplomatic Documents 1989–1990 (Quaderni di Dodis 12), vol. 12, doc. 1

dodis.ch/53168 Draft memo1 by the Director of the 4th Department of the Polish Ministry of Foreign Affairs, Janusz Fekecz2

Director Kastrup explained that the aim of his trip to Poland was to hold talks with over 50 GDR citizens who are currently at the FRG Embassy in Warsaw and seeking to leave for the FRG for a permanent stay, and to present the official position of the West German side to the Polish authorities.

He referred to a conversation between Minister Genscher and L. Wałęsa8 held in Bonn on 8 September, during which the West German foreign minister praised the Hungarian authorities for their approach to the departure of GDR citizens from the FRG Embassy in Budapest and the Hungarian territory for the FRG via Austria, and requested L. Wałęsa, as a representative of the new Poland, to apply “the Hungarian solution” to the group of GDR citizens remaining at the FRG Embassy in Warsaw. At the same time, Minister Genscher emphasized the historic importance of this issue for the West-East relationship in Europe, and to human rights in general. According to Kastrup, L. Wałęsa promised Genscher that the “Hungarian model” would be followed in Poland.

Director Kastrup made it clear that the FRG would not set out German legal positions in the case at hand (“it would be irrelevant which travel documents entitled the GDR citizens to leave Poland”). The FRG would prefer a pragmatic solution that took account of humanitarian considerations. To that end, they would be ready to get the Polish Red Cross, the German Red Cross and possibly also the International Committee of the Red Cross in Geneva on board. Both Kastrup and Ambassador Schoeller expressed their hope that the Polish authorities would show understanding and support for West German efforts to arrange the departure of GDR citizens for the FRG. They emphasized that the focus of attention of the West German public and media was on the GDR citizens at the FRG Embassy in Warsaw, just as it was for those at the FRG Embassy in Prague. In reply to Minister Skubiszewski’s question, Director Kastrup described the Hungarian authorities’ decision to allow GDR citizens to leave for the FRG en masse as a “humanitarian gesture in a European spirit”. In this context, he recalled Genscher’s words to the Hungarian authorities: “We will never forget what you did.”

Minister Skubiszewski observed that the Polish side was also in favour of a pragmatic and humanitarian solution to the issue of the GDR citizens remaining at the FRG Embassy in Warsaw. From our standpoint, the best option would be an amicable settlement reached by the East and West German authorities, one that would respect the interests of both governments as well as the people concerned. Poland advocated the observance of human rights, including the principle of free flow of people. In the case at hand, however, we had to bear in mind the good of Poland’s relations with West and East Germany. He explained that he had not had the opportunity to familiarize himself with the content of Minister Genscher’s conversation with L. Wałęsa. The stance of the Polish authorities would be determined by arrangements to be made directly by the governments of the two German states with respect to the GDR citizens remaining at the FRG Embassy in Warsaw.

Director Kastrup recalled that the FRG had held talks with the GDR about the East German citizens staying at the FRG Permanent Representation in Berlin and at FRG diplomatic missions accredited in socialist countries. In contrast to the arrangements that had regulated similar cases in the past, this time the GDR authorities were reluctant to issue a “silent guarantee” allowing such people to leave for the FRG (the GDR’s policy at the time had been to “consider favourably” applications for an exit permit). This time round, the GDR would only be willing to guarantee its citizens staying at the Embassies in Prague and Warsaw (until recently also Budapest) that after their return to the GDR, they would avoid punishment or consequences at their workplace, and would be granted representation by a lawyer when they appeared before East German administrative authorities. What the GDR authorities would not accept was that such citizens should be able to leave a third state directly for the FRG, as had been happening under “the Hungarian solution”. Consequently, people who were staying at the FRG Embassy in Warsaw could only have “a very vague hope” of leaving for West Germany. In Kastrup’s view, the GDR authorities were unlikely to change their position at that stage, which was why talks between both German states had stalled.

Minister Skubiszewski concluded the meeting by reiterating that we appreciated the importance of the humanitarian aspect involved in the issue of GDR citizens remaining at the FRG Embassy in Warsaw, and were aware of the possible ramifications for our relations with West and East Germany. He promised to look into the matter and give a concrete reply setting out the Polish position.

II. On 13 September, Director Kastrup and Ambassador Schoeller were also received by J. Czyrek9, the Minister of State at the President’s Office. One of the topics discussed was the problem of over 50 GDR citizens staying at the FRG Embassy in Warsaw and wanting to leave for West Germany.

Director Kastrup emphasized that he was aware of the fundamental differences on legal matters between the People’s Republic of Poland and the Federal Republic of Germany. Even so, the West German side sought a pragmatic solution with humanitarian dimensions. Minister Czyrek asked for an explanation of the political context of the problem, given recent declarations by the Federal Republic of Germany that it was not interested in destabilizing the GDR, and was keen to ensure the appropriate standards in that country in order to stem emigration. Did the current situation point to a shift in West German policy? (The FRG was creating many incentives to encourage immigration). K[astrup] emphasized that “human matters” could not be separated from politics. Young East Germans saw no opportunities for themselves (this went beyond mere economic motivation); they had been following news about the progress of reforms in the USSR, Poland and Hungary. Meanwhile, the current East German leadership was unable to solve these problems. “Mass fleeing” had its roots solely in the GDR, so a policy change in the FRG was not a factor here. K[astrup] underscored that he was requesting “humanitarian assistance in solving this problem, while taking account of human rights”. Minister Czyrek replied that he appreciated the humanitarian dimension of the issue. We would not try to “turn it into a problem”. From the logical and substantive points of view, this was primarily a matter to be settled between East and West Germany, however, and as such should be resolved by way of an understanding between the two countries. Such an understanding would be decisive for Poland, as we could be loyal both to the FRG and GDR. Minister Czyrek referred to Minister Skubiszewski’s decision as presented during the talks with K[astrup] , whereby a working group would be set up as a matter of urgency to draft proposals for a Polish position.

Minister Czyrek went on to underline that the matter was very difficult for Poland, as we viewed our friendly relations with the GDR as a serious issue and, unlike Hungary, we have no direct border with any Western states.

a) The issue of GDR citizens remaining at the FRG Embassy in Warsaw could have negative repercussions for either of the two German states, depending on which solution we support. If we side with the GDR, we risk negative effects in the context of Kohl’s10 visit to Poland11; if we go along with West German proposals, the political fallout could affect our relationship with the GDR.

b) From our point of view, the best way out would be if the two German states achieved an amicable settlement between themselves. At this stage, however, such a solution is unlikely and we are under permanent pressure from representatives of both countries (see J. Mąkosa’s12 memo of 12 September on the conversation with GDR Ambassador J. van Zwoll13).

c) In these circumstances, the MFA has set up a working group headed by B. Kulski14 to come up with possible solutions. What could prove helpful for us would be a solution to be adopted in the next few days in the similar case in Prague.

d) One should bear in mind that the problem will continue to grow (the number of GDR citizens at the FRG Embassy in Warsaw increased to 50 in the course of two weeks).

9
Józef Czyrek (1928–2013), dodis.ch/P44031, member of the Political Bureau and Secretary of the Central Committee of the Polish United Workers’ Party and Minister of State in the Office of the Polish President 1989–1991.↩

11
Helmut Kohl visited Poland on 9–10 and 12–14 November 1989 (following the fall of the Berlin Wall, Chancellor Kohl interrupted his visit to go back to the FRG).↩ 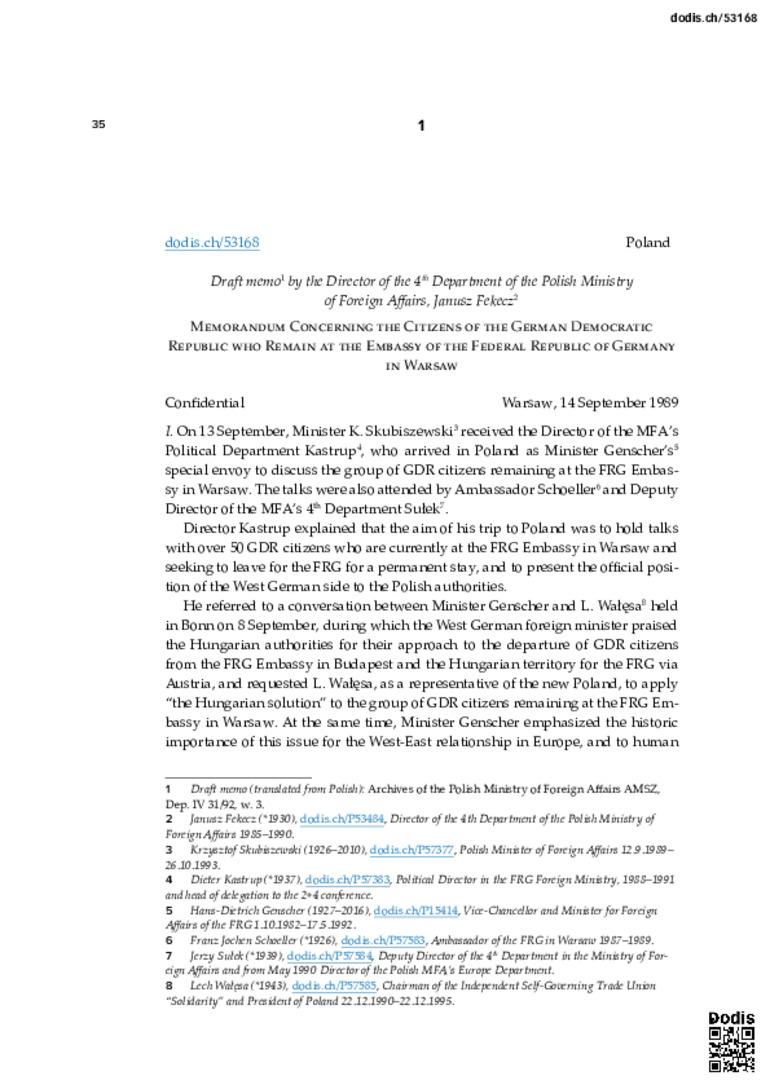 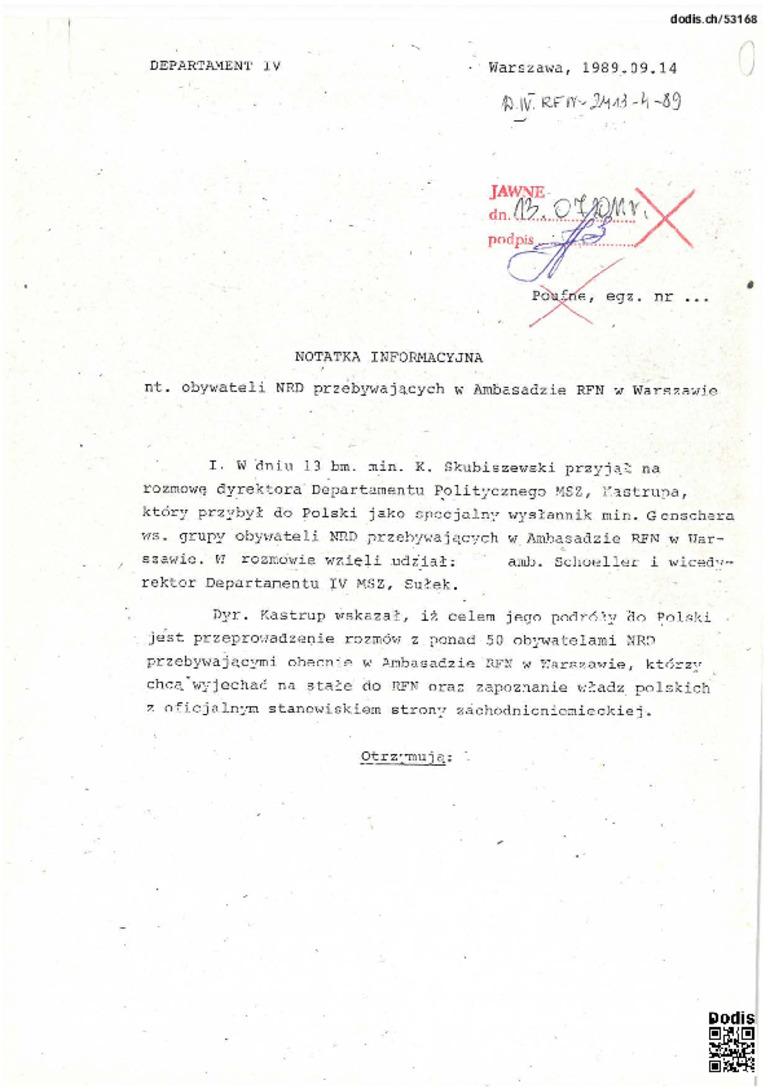 Persistent URL of this document: http://dodis.ch/53168