Language: Dutch
Visit Minister Ter Beek to Defense Minister FRG
Telegram (T) • confidential
Report on the visit of Defence Minister Relus ter Beek to the Defence Minister of the FRG Gerhard Stoltenberg, and the possible implications of German reunification for the banking situation in Germany, NATO cooperation, and the CSCE discussions with the Soviets.
How to cite: Copy

On the 7th of this month, the Minister of Defense Ter Beek paid a visit of about three hours to his FRG colleague Stoltenberg that began with a full military ceremony. In the first hour discussions were held between both ministers accompanied only by state secretary Pfahls,6 Stoltenberg’s aide and myself, followed by a delegation meeting lasting over one and a half hours, to be reported on separately.

Situation in the GDR

Stoltenberg began the initial small group conversation by expressing the desire that, in addition to bilateral issues, security-political topics would also be discussed. He introduced these with remarks about the dramatic situation in the GDR, which, as Modrow7 had said to Kohl8 in Davos, was now really on the verge of administrative, economic and social collapse which is also existentially threatening for all neighbors of the GDR. For this reason the federal government is forced to first deal with the economic and internal problems of German unification and shift the recognized external, status- and safety aspects to a future date for the time being.

This, according to Stoltenberg, had just now led to a governmental decision to formulate an offer to the GDR government to enter into, albeit under a number of very strict conditions, a monetary and economic community. This decision is of a political nature and is clearly outpacing Stoltenberg, faster than can be acceptable to his successor Waigel9 or Bundesbank president Poelhl10, but Modrow and also people like Berghofer11 stipulate that there is no time to lose in remedying the situation in the GDR: the number of “Übersiedler”12 has already risen to three thousand per day and if this continues hundreds of thousands will arrive in the west in the near future. One can hardly hide the fact that the proposal cannot be regarded as entering into a monetary union between equal partners, but that in fact the entire currency policy and an important part of economic and social policy must be placed in the custody of the Bundesbank. There will probably be no time to adjust the Legal Statute of the Bundesbank13 and the speaker did not deny that there was a risk that the German position of preserving the independence of the Bundesbank, an absolute priority of stability policy and a condition of economic-political harmonization for monetary unification might thus be placed in a peculiar light for some interlocutors of the FRG. (see also my 72 of today)

Minister Ter Beek asked his colleague about the current views of the FRG government on SNF and at what point would this topic need to be discussed in the alliance. Stoltenberg did not consider this subject to be appropriate for public discussion at present, but a negotiation concept on substrategic weapons must be formulated timely within NATO before a second round of CSE. In the federal government there is agreement on two points, namely 1) the Soviet preponderance must be phased out and 2) a responsible NATO concept is also possible with fewer than the current number of substrategic nuclear weapons. Presently, among other things, technical research is being carried out to determine whether one could do with a minimum of exclusively air based SNF. Against this, there are of course significant objections because of the vulnerability.

On the other hand, a lot has changed politically. Stoltenberg believed that the Americans are also more relaxed with regard to this subject, even if the Bush14 Administration is certainly prepared to fight in Congress to keep the SNF option open. Stoltenberg thought it important in future, and perhaps soon, to speak on this subject in the first place confidentially and at a high political level, since this – it could not be denied – carried a considerable emotional charge in the Federal Republic. (Minister Ter Beek had pointed out by way of introduction that apparently Genscher15, Dregger16 and Bahr17 – representing the three largest parties – had come together in the rejection of SNF.)

Minister Ter Beek, pointing out that it is a deterrent weapon should of course be able to hit the enemy wherever he was, underlined that the political debate in the Netherlands remains ongoing and that it will take place in a new political context. For the time being it is best to study the case thoroughly, yet with the certainty that the subject will be on the table again after CSE-1. In response to a question from Minister Ter Beek as to whether SNF would not automatically become an election theme in the FRG, Stoltenberg replied that it would probably be a theme, but after all that has happened recently it will not be the center of gravity in the election battle.

Stoltenberg repeated once again that on the one hand the FRG does not want a denuclearized Europe, and on the other hand it had not yet fixed its position on the SNF issue. Much would depend on whatever truly binding treaty agreements might be reached with the Soviet Union in the short term. However, it was certain that nuclear artillery could very well be abolished.

Minister Ter Beek asked his colleague how the French had spoken about a.o. Pluto and Hades18 in confidential discussions. His impression was that the French regarded these weapons as predominantly insurance of access to the negotiating table in the event of a possible conflict, a trauma that has persisted since the end of the Second World War. Stoltenberg acknowledged that the French remained very cautious on this point and that it is important to appeal to them increasingly. It is desirable that the French participate in ever more political forums and structures within NATO. In this context, French discussion partners like to hide behind the exclusive competence of president Mitterrand.19 Stoltenberg appeared to avoid for the time being the question of whether the WEU might play a role here. Mitterrand is no fan of the WEU, but also for the Federal Republic France’s further integration in NATO would be conditional on lending more substance to the WEU consultations, so that the WEU will not function as a competitor but rather as a supplier to NATO. In conclusion to this theme, Stoltenberg pointed out that the present French Prime Minister Rocard20 is known to have views of his own on this issue, so that one can perhaps regard potential French cooperation with a little more optimism.

In response to a question from minister Ter Beek as to whether Mr. Stoltenberg has a timetable in mind for German unification he answered negatively. It is clear that a democratically elected GDR Parliament could very quickly decide to open negotiations with the FRG about unification, which, moreover, is coming about increasingly fast in a factual sense. However, apart from very important domestic political decisions, the “political completion”21 of this process requires the solution of the external problems concerning the neighbors, the Allies, the “Schutzmächte”22 and especially the Soviet Union. Regarding the time span that will be needed from the beginning to the end of this process there are at least three views in the Federal Government. The key question here is obviously what demands the Soviet Union will make related to formal unification.

The Federal Government knows and recognizes that the Soviet Union will make demands and also has legitimate rights in this matter, but even the United States does not know where a Soviet “bottom line” might be and it is questionable whether the Russians know it themselves.

About the conceivable military configuration in a united Germany, Stoltenberg said Genscher had, as usual, released all sorts of trial balloons, but he was now resigned to the official line of the Federal Government, which has also been accepted by Minister Baker23, although apparently this has once again been contested by Fitzwater24. A central question in all of this is of course how much longer Soviet forces will (be able to) remain on the territory of the GDR.

In connection with the relevant conversations held at the 27th Wehrkundetagung25 (ref my 66) Stoltenberg answered the question on how representative the opinions of Bahr and Voigt26 were for the entire SPD by noting that their position certainly represented a basic current in the SPD, but that otherwise a number of SPD leaders, including Vogel27, would also have great difficulties. Much would depend on the question of whether a real safety structure can be constructed in the CSCE context built on the three pillars: the Soviet Union, North America and Western Europe.

12
Übersiedler: Migrants moving from the GDR to FRG.↩ 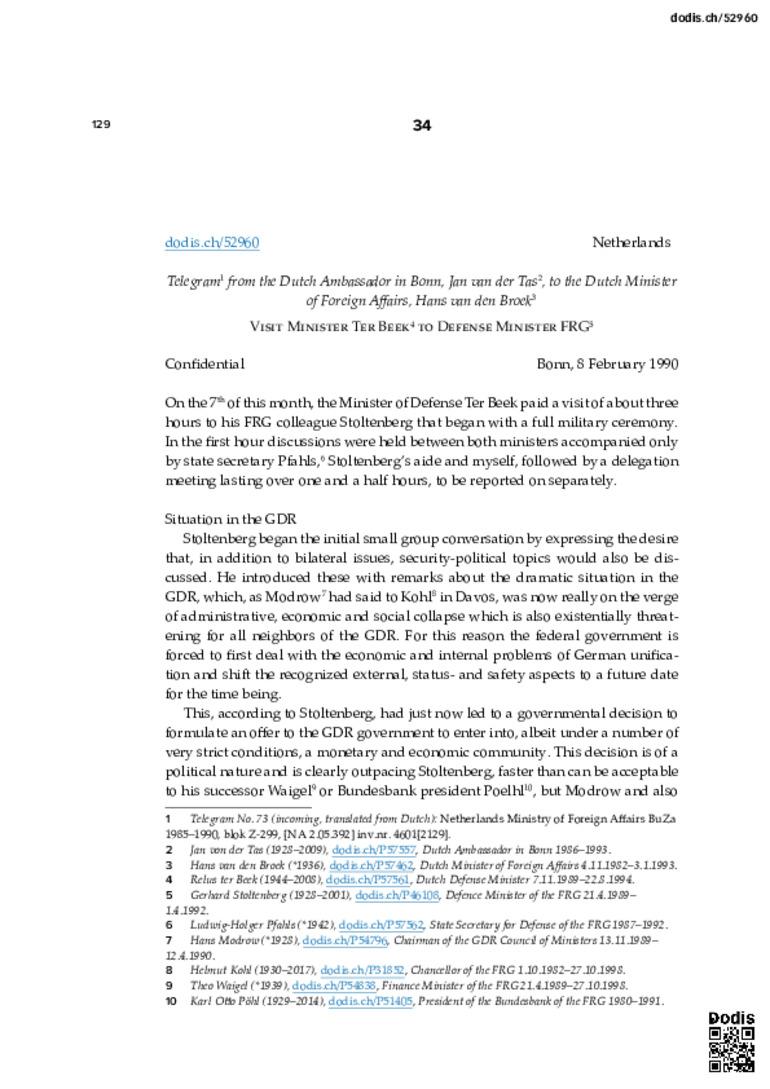 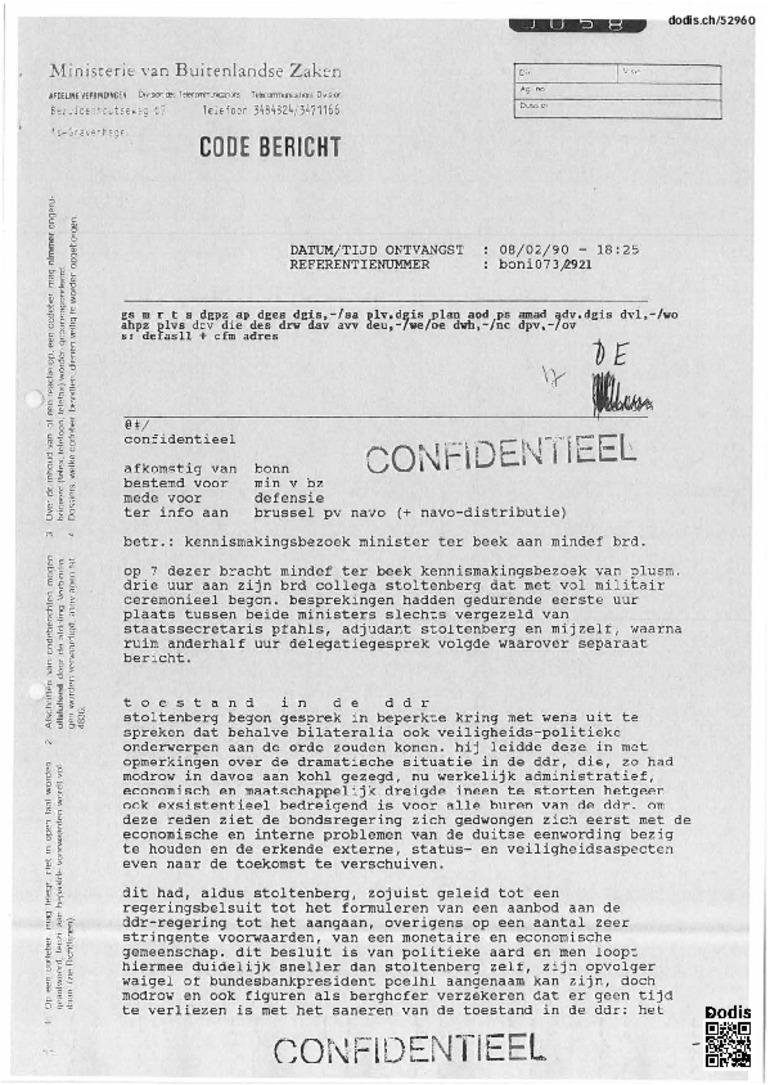 Persistent URL of this document: http://dodis.ch/52960