When the Wall Came Down. The Perception of German Reunification in International Diplomatic Documents 1989–1990 (Quaderni di Dodis 12), vol. 12, doc. 5

dodis.ch/52948 Extract from the Diary1 of the Protocol Officer at the Embassy of the FRG in Warsaw, Rüdiger Freiherr von Fritsch2

Kohl’s Visit and the Fall of the Wall

Thursday, 9 November 1989: Early in the morning, Deutsche Welle says: “Everything is finally ready. The route has been planned, the communiqués written and the Chancellor3 can now travel to Poland …” If they only knew! The Ambassador4 is trying desperately to contact the Foreign Minister5, but is not getting anywhere. Not only is the visit programme still up in the air, but the planned joint declaration by Kohl and Mazowiecki6, which has been discussed for months, isn’t finished either. The Chancellor has let it be known that he will not leave Bonn until it is ready. Yesterday, the discussion focused on whether we should say “of German ethnic origin” or “of German descent”. Today, the talk concerns an “and” or “or” in some part of the text I’m not familiar with. At some point, that too is resolved. Can the Chancellor and his entourage really set off? Warsaw is shrouded in fog! At around 12.30 p.m., we got the go-ahead from Polish security. The flight was scheduled to leave Bonn at 1.00 p.m. … We set off for the airport just after two, the delegation arrived and we drove back to the city. Chancellor Kohl has rejected the suggested programme for the weekend once again and wants to discuss it with Mazowiecki himself.

At around 6.30 p.m., Genscher7 met Adam Michnik8, one of the leading figures in the democratic (hitherto) opposition and now editor-in-chief of “Gazeta Wyborcza”, Solidarity’s new daily. It was an interesting meeting. Michnik is preoccupied with the German Question. For the first time, he said, it feels as if the GDR actually exists as a state. Formerly, it was not merely a state with a Soviet basis, but rather a Soviet basis with a state. In his opinion, that gives rise to entirely new opportunities, also as regards the question of reunification. He said people only want to reform the GDR, not renounce it. He’s worried about growing nationalism in Europe, particularly in hitherto socialist countries, and sees this as a result of radical anti-communism, with the pendulum now swinging the other way. This is tangible in Poland, he said, but also in Hungary and the Soviet Union. – Earlier on, I heard the news that put everything else in the shade – the GDR has opened its borders. Incredible! How will Europe live with that? National reunification or European integration, as planned from 1992? Germany must become the main topic (of conflict) in Europe in the near future.

Friday, 10 November 1989: The events in Germany are all anyone is talking about in the government guest house. The Chancellor’s office is talking about him flying back at around 5.00 or 5.30 p.m. today. He would then return to Poland, maybe tomorrow. It’s all go in the delegation office. Special guests on the delegation want to know what’s going on and the journalists are already packing. Shortly afterwards, we hear that the Chancellor has decided to fly as early as 2.30 p.m. Hectic attempts are made to inform the flight crew. Shortly after that, I meet a colleague outside the Council of Ministers building who tells me the Chancellor wants to fly at 1.30 p.m.! We speed out to the airport, where I speak to the airport management by phone. They immediately dispatch security staff and the necessary technicians who see what can be done. The plane hasn’t even been refuelled yet. They allow our car onto the airfield – the military section!

12.45 p.m. The captain doesn’t know yet that the departure has been brought forward. “2.00 p.m. at the earliest if it all goes well.” But that means there won’t be any food on board. No worries, the main thing is to get away. After some discussion, the Polish side is prepared to let the plane take off from its parking position, thus saving 20 minutes.

1.45 p.m. The plane is ready for take-off. The Polish security people are very cooperative and obliging. They don’t bother inspecting passports or anything.

Kohl and Genscher arrive five minutes later. They give a short statement to the press and the plane leaves. We draw up a tourism programme from scratch for the special delegation members who have been left behind.

A colleague and I meet Adam Michnik at “Gazeta Wyborcza” at 10.00 p.m. He signs a copy of today’s paper for us. The front page has a picture of Kohl and Mazowiecki and the headline “Europe without Walls”. At the dinner afterwards, there is a very lively discussion, as always. We talk about Germany, Poland, Russia and Europe. We discuss the church, nationalism, republicans and socialism. We cover Solidarity and the future, as well as European integration and the German Question.

Michnik is surprised and fascinated by the events in the GDR, which have not changed his positive attitude towards German unification in the slightest. In fact, he feels the events back up his analysis. He wants to know what we think will happen. What would be possible in a situation like this? It’s hard to say what will happen tomorrow. 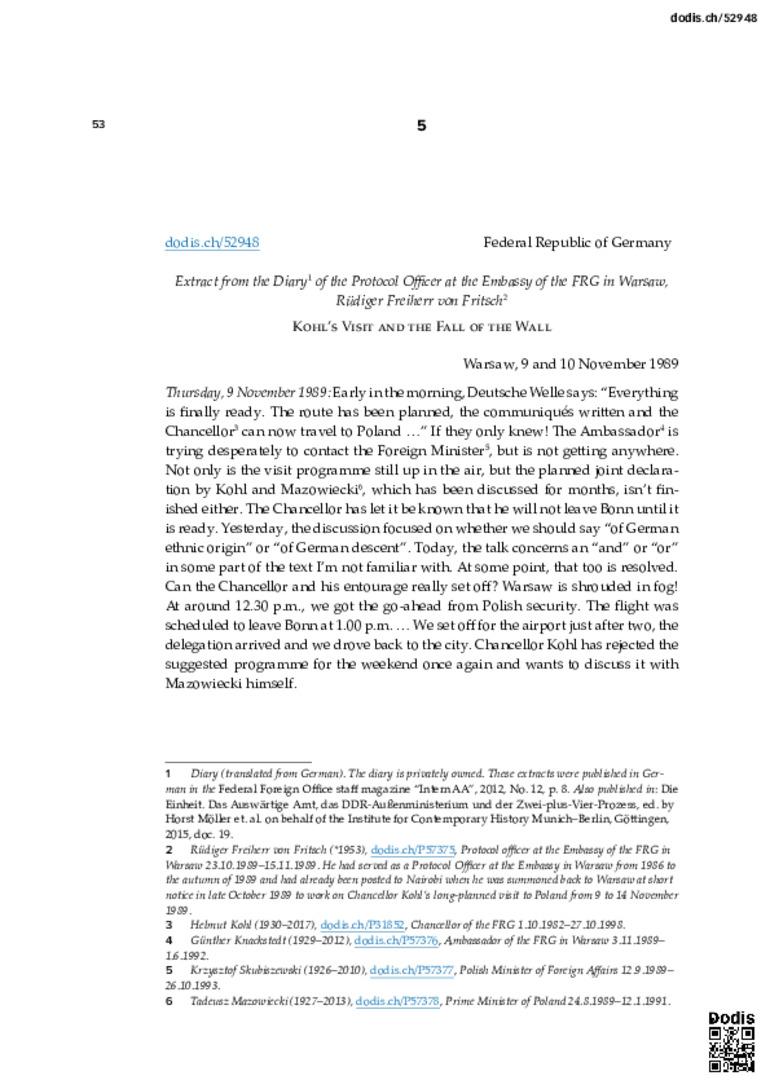 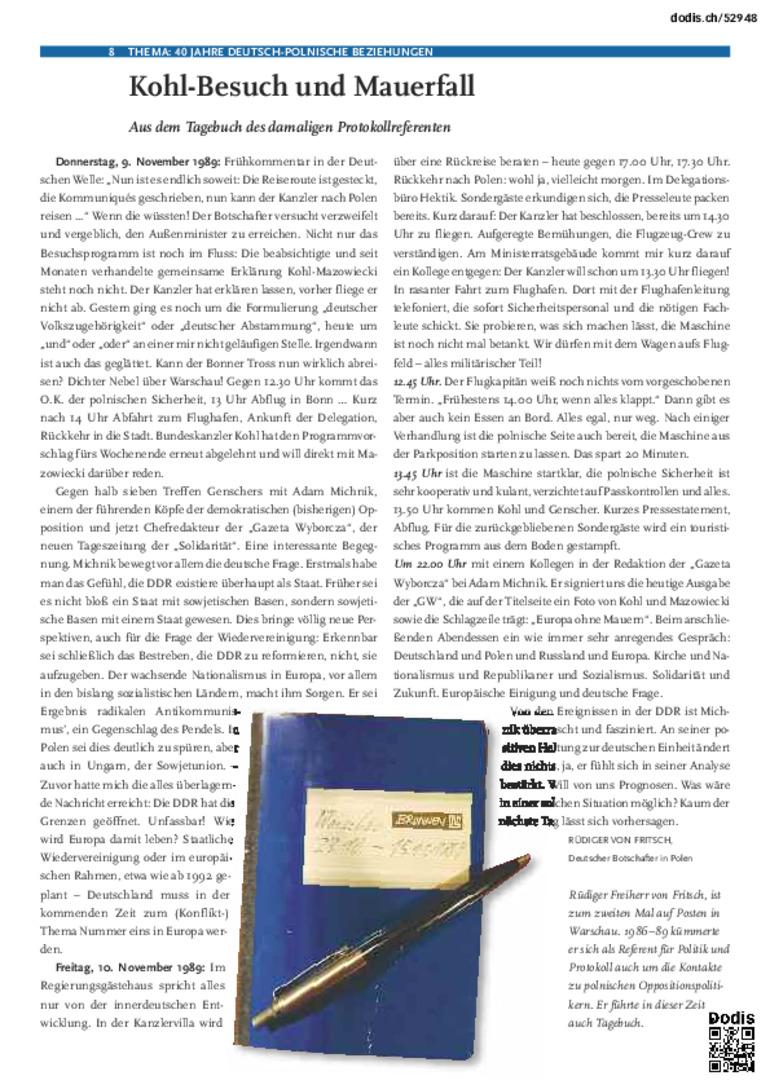 Persistent URL of this document: http://dodis.ch/52948