Language: English
No. ZQR1482. The Berlin Game – The Morning After
Telegram (T) • confidential
Observations on the mood in East Berlin in the immediate aftermath of the opening of the Berlin Wall.
How to cite: Copy

When the Wall Came Down. The Perception of German Reunification in International Diplomatic Documents 1989–1990 (Quaderni di Dodis 12), vol. 12, doc. 19

dodis.ch/52937 Telegram1 from the Canadian Ambassador in Bonn, Thomas W. Delworth2, to the Canadian Department of External Affairs

The Berlin Game – The Morning After

2. Fogged in, with only intermittent misty sun and chill wind blowing, Berlin had a distinct hangover look, the crowds and masses of cars of the weekend were gone. So was the joyous atmosphere. Traffic was almost normal. There were only a few GDR cars and Kudamm crowds were only slightly heavier than usual. But Berlin authorities were anticipating that last weekend will usher in further rounds of the Berlin carnival, even if perhaps not as boisterous and emotional in future, and with smaller crowds – now that everyone in East Berlin is used to the idea that they can “get out”. Reality of limited housing, problem of getting a new job, lack of money, prospect of moving away from friends and family, as well as a kind of personal as opposed to political pride, appeared to be imposing sober second thoughts on many East Germans, even if the attractions of West Berlin were still a bit dazzling.

3. Reality was also imposing its discipline on chaotic images of weekend. Although there are more and more holes in it, and although it has thus lost much of its malevolent psychological power, the Wall remains. Neither Germany nor Berlin have been re-united. Contrary to the popular press headlines of the weekend: “Berlin is at last a single city once more.” After the laissez-faire chaos of weekend, which acted as a welcome stabilizing safety valve, GDR authorities were slowly re-exerting control at the checkpoints, insisting on visas which, however, were being issued routinely with a minimum of delay. At Potsdamer Platz checkpoint, subdued and business-like East Germans could be seen patiently waiting in relatively short lines for documentation, and then trickling across the no-mans-land into West Berlin, almost as if it were normal practice. While movement of people east and west has been liberalized, nothing has changed for travellers west to east and, above all, the frontiers remain. Indeed, Soviet spokesmen have made respect for the existing frontier a sine qua non for Soviet acquiescence in developments. French interlocutor hailed victory of West in Cold War, not least due to Western solidarity, but USA general cautioned that from perspective of protecting powers, we were only at mid-point of a marathon, not end of the race, and the need for patience, coordination and firmness remained as great as ever.

4. Significantly, the most powerful emotional symbol of division of Germany, the Wall at the Brandenburg gate, remains and attracts the fascinated interest of crowds and media crews. Krenz8 has been making noises about opening this entry too, since he knows its value as a symbolic gesture and we expect that it too will become a new crossing point in near future.

5. Perhaps most surprising aspect of what some perceive as the primitive beginnings of German reunification was the lack of violence and quintessential German orderliness of crowds. Despite an influx of 2.4 million visitors, order was maintained, with little vandalism or crime and few disturbances or injuries. Cars filed into city in orderly lines and parked in as orderly a fashion as possible. The crowds, like revellers who can scarcely believe their good fortune, remain good-natured, if boisterous. The only possible danger points emerged at Potsdamer Platz where crowd had reached critical mass and might have exploded had not East German border guards given up any pretense of control, and at the Brandenburg Gate where crowds climbing Wall were removed by West German police with the agreement of UK authorities for fear that one false step or an accidental slip might set off a riot.

6. From our discussions, some consensus appeared to be emerging that trigger from historic 09 Nov event was announcement by GDR government spokesman Schabowski9 following Politburo meeting on 09 Nov that frontier was now open. Message was picked up first in West Berlin and was then relayed back to GDR by western media. Incredulous crowds began to gather at Wall and checkpoints, quickly reaching critical mass. Given a serious breakdown of lines of authority within GDR government, which extended to frontier guards as well, latter were not willing to oppose masses without orders and simply gave up. Once the first crowds surged westward, GDR authorities realized that to try to stem tide would be suicidal and very wisely let the situation go in order to blow off almost a half century’s pent-up steam.

7. On the morning after, so to speak, Berlin was beginning to face up to implications of a more open frontier. Invasion of badly engineered East German cars had created massive pollution and traffic problems – all of which is anathema to the Greens at the best of times, and they are now an essential element in the city governing coalition with the SPD. The city could not be expected to continue its generous attitude to hordes of East Germans lacking hard currency. Fears and opposition to new arrivals over housing, jobs and social services are growing, not least since latest refugees, in contrast to young, well-trained professionals who had fled west via CSSR and Hungary, included heavy admixture of the dregs of East German society. Notwithstanding natural optimism and resilience of Berliners, the thought of who would pay for last week’s party (and how) was beginning to trouble many. As an example, Berlin banks which had financed the enormous demands for the 100 DM welcoming payment made to all East German newcomers on first arrival were already demanding that Bonn not only replace funds immediately but pay interest and extra costs of processing. The party, indeed, was over. But nothing on the other hand would ever be the same again in Berlin and in the Federal Republic, as well, of course, as in the East. 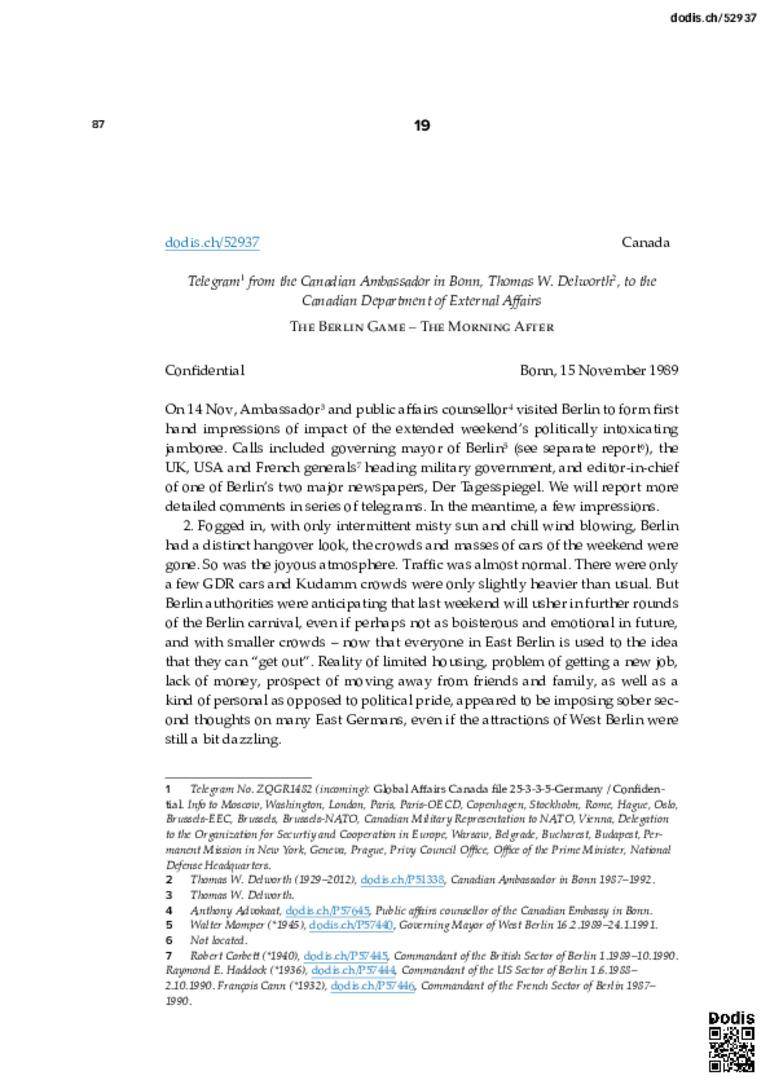 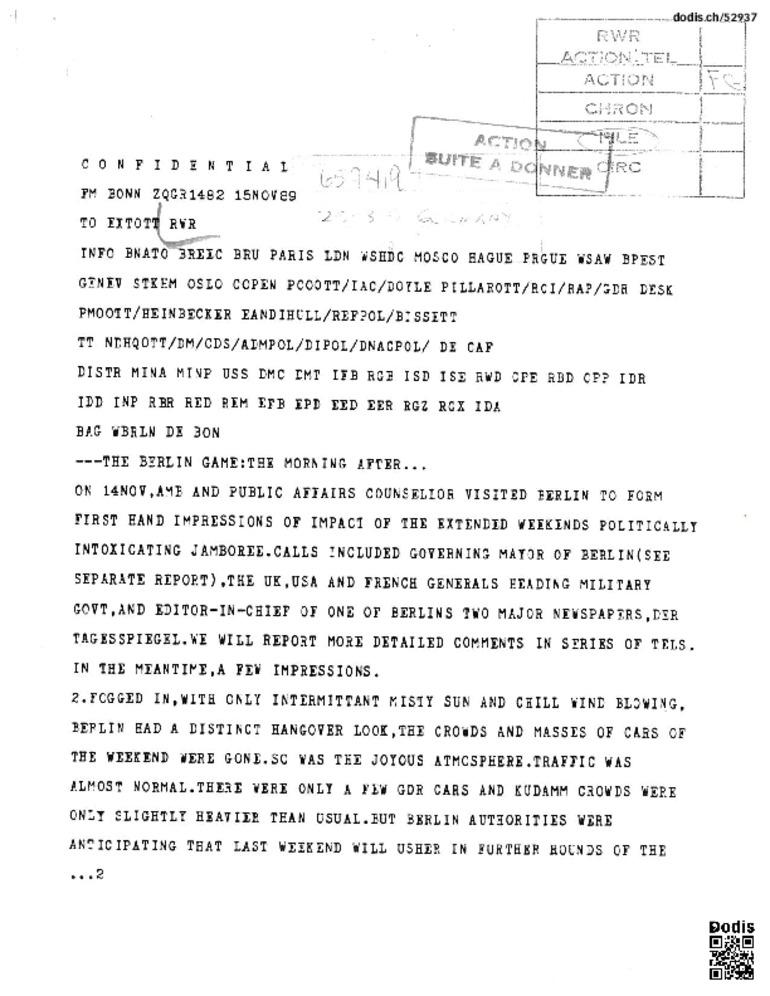 Persistent URL of this document: http://dodis.ch/52937