Language: English
The Wall Breached: Implications for Malta, Your Trip to Europe, Relations with the GDR, and the Reunification Debate
Memo (No) • secret
Preliminary assessment of the implications of the dramatic events in East Berlin for US policy in Europe.
How to cite: Copy

When the Wall Came Down. The Perception of German Reunification in International Diplomatic Documents 1989–1990 (Quaderni di Dodis 12), vol. 12, doc. 6

dodis.ch/52915 Information Memorandum1 for the United States Secretary of State, James A. Baker2

The Wall Breached: Implications for Malta, Your Trip to Europe, Relations with the GDR, and the Reunification Debate

The East German decision to lift travel restrictions has created a new situation in Europe. This memo is a first attempt to address the implications for the Malta meeting and your December trip, for relations with the GDR, and for our handling of the debate on reunification.

Events in Germany further demonstrate the wisdom of the President’s3 decision to hold an early, informal exchange with Gorbachev4. Attention will very much be on Europe and German events. At the same time, it is all the more important to avoid creating the impression that these issues will dominate the Malta discussion. We need to avoid both any suggestion of superpower condominium (the “Malta rhymes with Yalta” concern) and also recognize that the results of a Bush-Gorbachev discussion on Germany and Eastern Europe are liable to be meager and thus for the public disappointing. Consequently, we should begin to emphasize that the Malta discussions are designed to move the US-Soviet dialogue forward across the board, and that we are looking for substantial exchanges on arms control, regional and transnational issues as well as on the situation in Europe. We should also consider how events in the GDR might affect our approach to the economic issues. Gorbachev’s support for open borders in Germany, combined with Soviet passage of their own immigration legislation, could provide a basis for early forward movement on Jackson-Vanik, MFN and perhaps even Ex-Im Bank lending restrictions.

Pre- and Post-Malta Consultations and Your Trip to Europe

The NSC5 has said the President wants to enhance pre-Malta consultations, and asked our advice. We recommend an early Presidential message to the NATO colleagues, followed by a pre-Malta briefing here of Allied Ambassadors. We anticipate high interest among your Foreign Minister colleagues in an early post-Malta readout. If you agree, we should contact Genscher6, Dumas7, and Hurd8 to see whether they would be ready to travel to Brussels for an immediate post-Malta debrief. If at least two out of these three are prepared to participate, we recommend you schedule such a session. The quickened pace of events in Europe also makes the full range of consultations under consideration for the following week (the EC, a G-24, and NATO Ministerials) all the more important. Finally, we continue to recommend a visit to Bonn and West Berlin to accentuate our solidarity with the FRG and the central role of the United States in promoting a peaceful change in Europe. If you concur, we could begin arranging for such visits, but hold up on announcement till somewhat closer to the event.

Relations with the GDR

Assuming they do not back-pedal from the steps already announced, we should move to expand our relations with the GDR. An early Presidential message to Krenz9 expressing approval for the travel liberalization and support for further reforms should be considered. If the new permanent GDR travel regime, reportedly to be promulgated in a few weeks leaves the borders open, we should consider a Jackson-Vanik waiver for the GDR.

An early senior level visit to East Berlin (e.g., by Eagleburger10, Kimmitt11 or Seitz12) would demonstrate our interest in an improved relationship, launch serious talks to remove some old bilateral obstacles (i.e., unresolved claims issues), and open the way for yet higher level contacts next year (e.g., a visit by yourself). Any actual U.S. economic assistance to the GDR, of the sort we are providing Hungary and Poland, should be tied to the holding of genuinely free elections, as Kohl has recently done. Given the FRG stake, the amount of US assistance would in any case be minimal, but even a symbolic US participation might be useful in the context of a truly reformed GDR.

The reunification debate will become all the more immediate, concrete, and delicate. There will be pressures both domestic and from Allies for the United States to take the lead in sketching out a blueprint and timetable for the new European order. With the Germans increasingly seizing control of their own destiny, there will be those who will urge us to reassert more forcefully our own rights and responsibilities for Germany, growing out of the war and the four power Yalta and Potsdam agreements. The problems with such an approach are that it puts the onus on us to come forward with plans for a new European architecture, that it legitimizes the Soviet veto, and that it makes us appear a possible obstacle to German aspirations. We should, therefore, keep the emphasis where we have put it, upon the principle of self-determination.

The time has come, however, to begin to address more concretely with the FRG, the British and the French the issues which the prospect of reunification in some form pose. We should seek agreement among these Allies, and then among NATO more generally, not on a blueprint, let alone a timetable for reunification, but on a set of guidelines for channeling any developments in this direction. The key guideline is that the process of West European integration, and of transatlantic cooperation should continue to be intensified, and that any new relationship between the two German states must not weaken Germany’s Western ties. Kohl13, of course, has stressed this very theme repeatedly. We now need to begin considering how Germany’s Western ties can in practice be assured in a transformed European context. The British and French will welcome such a discussion, while the Germans will hold back. But we need to make an effort. The next Quad meeting, which Dumas, Genscher and Hurd are proposing be held over dinner December 13, provides an occasion to launch this exchange.

I have reviewed these recommendations with Ray Seitz, who concurs. 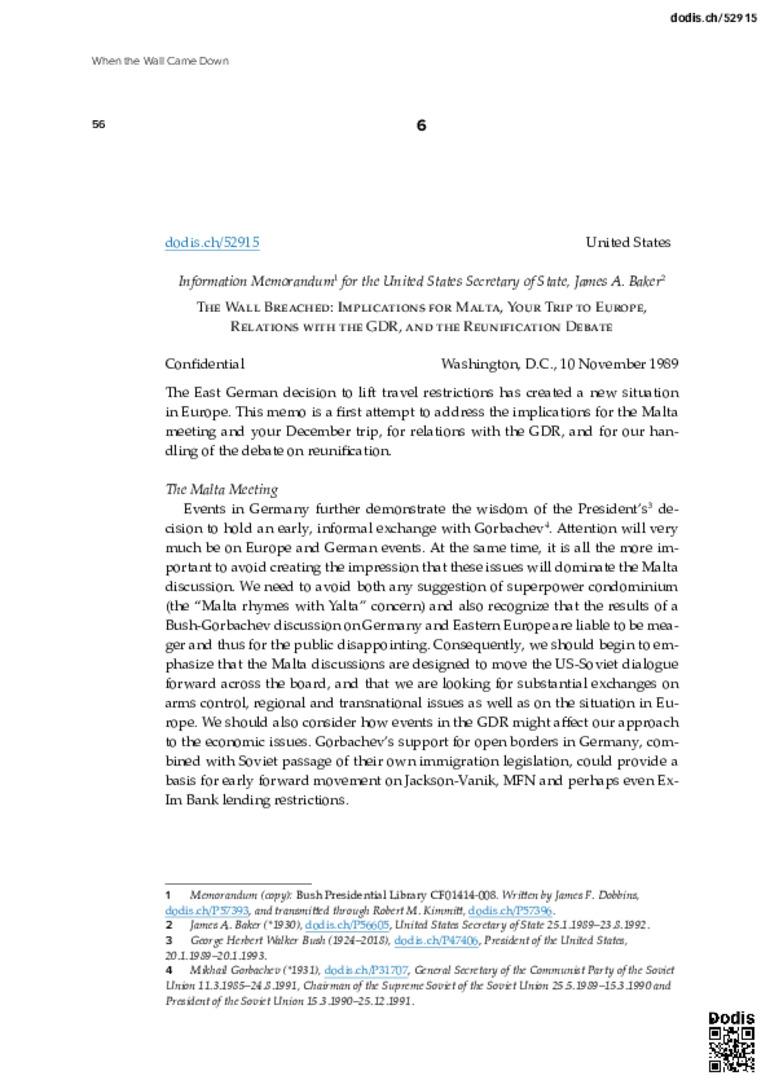 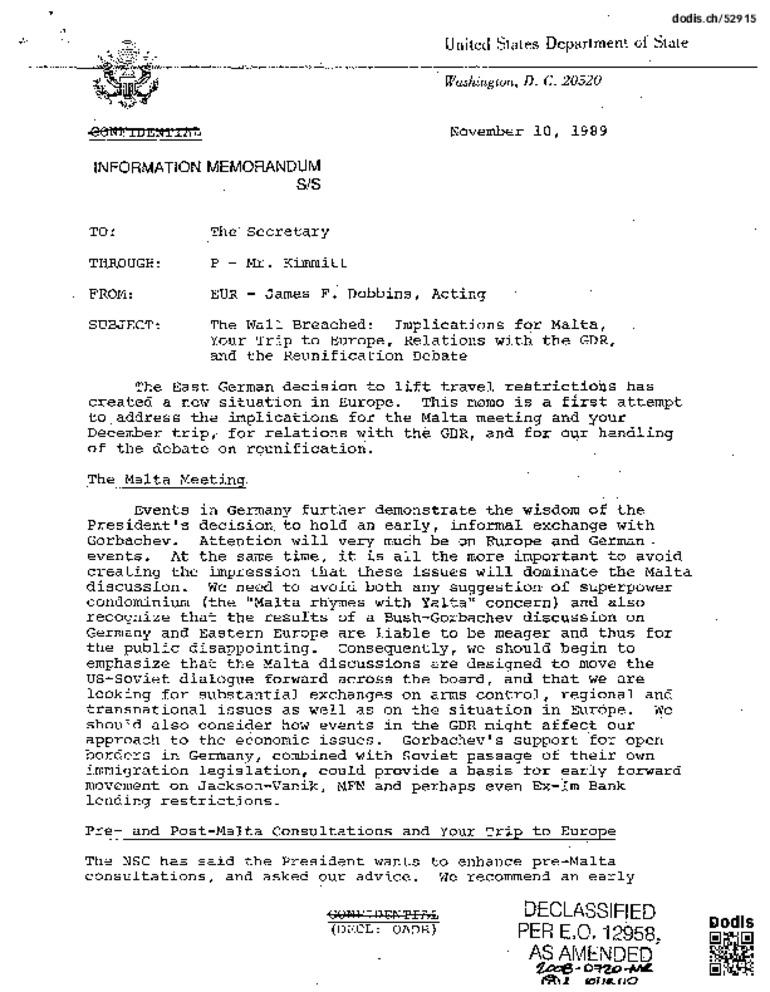 Persistent URL of this document: http://dodis.ch/52915