dodis.ch/52952 Telegram1 from the Ambassador of the FRG in Tel Aviv, Wilhelm Haas2, to the Ministry of Foreign Affairs of the FRG

1. Comments by Foreign Minister Arens on German unification during his visit to Bonn on 15 February4 have been criticised by the Israeli press and particularly vilified in the two best-selling dailies.

In an editorial, “Maariv” speaks of “national insanity” and “moral bankruptcy” if the Foreign Minister of the “state of Holocaust survivors” welcomes reunification, expresses his trust in German democracy and so clearly signals his support for “the creation of the prerequisites for a Fourth Reich and a new Hitler5”. Today’s edition (Schnitzer6) reminds readers of Greater Germany’s abuse of power. “Even if we are unable to do anything to prevent reunification, it is our duty …. to warn and remind people how Nazism was able to emerge from a democracy in Germany, which we … can no longer believe after we had to pay with six million lives.”

“Yedioth Ahronoth” (Ben-Orat7) asks who gave Arens permission to “now give our blessing to the creation of a Greater Germany” and to throw away “free of charge and with nothing in return the final trump card of our stance on reunification in the game against our European partners”. The paper writes that Israel’s position on the German issue is a matter for the people. Before commenting on this issue, there should have been an in-depth debate not only in the Knesset and with the Israeli public, but also with Germans and all Europeans. “Not a single day passes when they do not spit in our faces, insult us and vilify us”. However, they need Israel for one thing – “as moral legitimisation for German reunification”.

The tone is much calmer in other newspapers. “Haaretz” (Schweitzer8), the third-largest paper, rates the visit as actually “pretty positive”, as it proved that “Israel’s policy on Europe must be based on Germany”. “Germany, particularly its western part, is no longer suspected of being like its fathers and grandfathers in Auschwitz, but nevertheless it has not earned the right to have people loudly proclaim their trust in it.” Today’s comment is even more positive: The Foreign Minister “did well in leaving his interlocutors in Bonn in no doubt that Israel will continue to follow the events in the Federal Republic and the GDR closely in order to see if Germany remains conscious of its historic responsibility and acts accordingly”.

The union newspaper “Davar” writes that the Federal Republic “has proven in word and deed its willingness to atone for the sins of the Third Reich”. Neither world Jewry nor Israel can prevent reunification, it says. However, Israel can take action in two areas. Internally, it can put pressure on the German education system to ensure that “the lessons of the Holocaust continue to be taught” in a united Germany. In terms of foreign policy, it can work towards Germany renouncing nuclear weapons, supporting peace efforts in the Middle East and providing generous support to reconstruction and development projects in the region.

“Al HaMishmar” (Mapam9) describes the unavoidable reunification” as “unbearable from a Jewish point of view” because it will boost Germans’ pride, influence and self-confidence, “the characteristics that led to mistakes and sins in the past”. It writes that the Federal Republic has done a great deal to atone for the sins. Given the terrible extent of the Holocaust, however, the debts can never be entirely paid off.

The “Jerusalem Post” comments today that the attacks on Arens can only be understood as emotional reactions. The Foreign Minister did not give his blessing to German reunification. He merely expressed the hope that a united Germany would uphold democracy and remain aware of its duty to the Jewish people. Weak democracies, including the Weimar Republic, fell prey to totalitarianism. “Israel’s role here is clear. It must use its moral power to ensure that Germany remains democratic, liberal and vigilant against signs of totalitarianism. … As a state, Israel must endeavour to make this nation its ally and friend.”

2. According to newspaper reports, some cabinet members (Likud Environment Minister Milo10, Likud Minister of Economics and Planning Moda’i11 and Labour Minister of Communications Yaacobi12) have distanced themselves from Arens and are calling for a debate on German unification. After Arens and his deputy Netanyahu13 return, this debate is scheduled to take place in the Knesset at the start of next week. Moda’i explained his stance to me yesterday by saying that there had been absolutely no need for comments, as the course of events could not be changed and there was no cabinet decision and thus no government view.

3. Over the weekend, a visibly stricken Arens tried on television and in newspaper interviews to clarify the comments attributed to him. In “Maariv”, he pointed out that most of his family had perished in the Holocaust and that he would “never visit Germany as a tourist”. However, the Federal Republic was now a large power with democratic institutions in which he had utter trust. “Naturally, one cannot free oneself from the terrible memories, … but as Foreign Minister I ask if that means we should break off relations with Germany”.

After weeks of increasingly rational reporting and discussion in Israel on German unification, the pendulum has now swung sharply towards the emotions that the Holocaust has indelibly branded in the hearts of its victims and their descendants. The pendulum hits Arens less as Foreign Minister than as the main candidate so far to succeed Shamir14, an effect that is certainly not unwelcome to many in view of the long-standing dispute on who will take over as leader of Likud. The misunderstanding that the Israeli Foreign Minister has given a moral seal of approval to German unification was partly caused by over-interpretations by the German press and the fact that he made these comments in Bonn. The same statements in Israel (see reference telegram) (initially) had no adverse impact on Arens.

We can hope that the debate which has now been sparked will not lead the Knesset and Government to adopt a negative stance on German unification, but will instead return to and thus strengthen the more moderate path of recent weeks, that is, not to forget the past, which also involves a loss of trust in the legacy of Weimar democracy, and not to give a moral seal of approval to a united Germany, but – despite all emotional resistance and fear – to hope for and foster a continuation of the democratic path and of the Federal Republic’s policy that is aware of the past.

4
According to a press release by the Federal Foreign Office of the FRG, Arens assured that after 45 years of democracy he had full confidence in the Federal Republic of Germany and its democratic institutions as well as in the advocacy of freedom and human rights expressed in the Freedom Revolution in the GDR, and thus would have complete trust in a united Germany. Translated from German from: Political Archive of the German Federal Foreign Office PA/AA, B 7, Bd. 178982.↩

8
Avraham Schweitzer (1923–1991), Israeli journalist and member of the editorial board of Haaretz.↩ 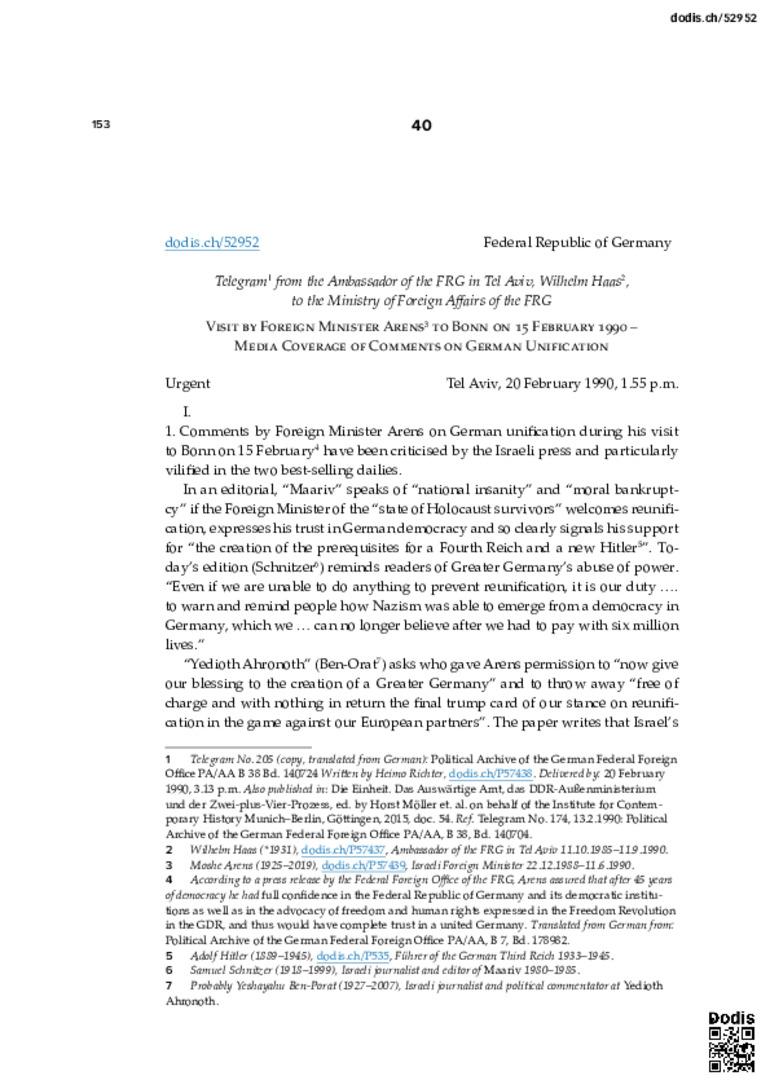 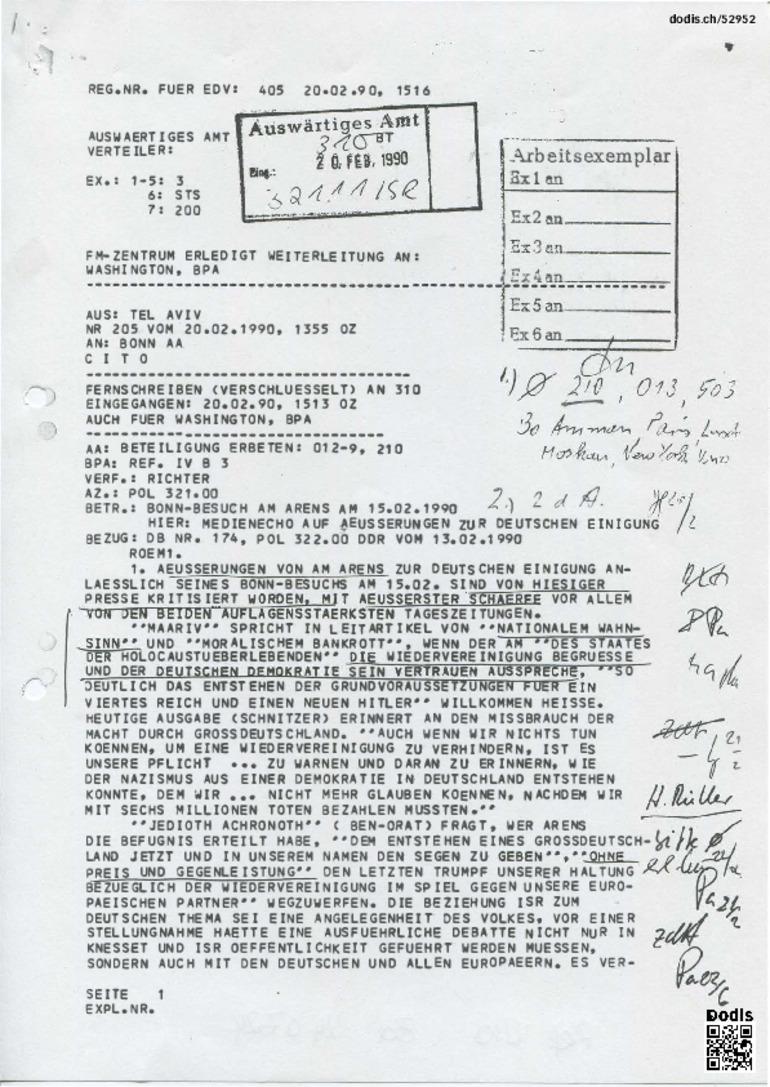 Persistent URL of this document: http://dodis.ch/52952