When the Wall Came Down. The Perception of German Reunification in International Diplomatic Documents 1989–1990 (Quaderni di Dodis 12), vol. 12, doc. 28

dodis.ch/52950 Memo1 for the State Secretary of the Foreign Ministry of the FRG, Jürgen Sudhoff2

Purpose of the memo: for information

1. In contrast to the Italian media, the Italian Government has reacted with marked coolness and reserve to the events of recent weeks in Germany.

The only official statement has come from the Farnesina, which expressed the hope on 10 November 1989 that “the German people can be the main player in all future decisions”. The topic was discussed in the Italian cabinet for the first time on the evening before the European Council in Strasbourg after Deputy PM Martelli4 had publicly criticised the lack of an official Italian position during his visit to Bonn.

2. PM Andreotti’s repeated comments on the German Question in newspaper interviews have thus attracted a great deal of attention. He has primarily expressed concern about a threat to the delicate balance of power in Europe and the political future of Soviet President and party leader Gorbachev5, whose fate he sees as tied to a balanced and gradual solution to the German Question in a pan-European framework. His divergence from the generally more positive assessment by the Partito Socialista Italiano (PSI), but also by Democrazia Cristiana (DC) itself, has thus become clear.

Following the sudden opening of the Wall on 9 November 1989, PM Andreotti did not comment on issues concerning the future of the two German states, but instead urged people to “keep their nerve”. Regardless of the dramatic changes in the GDR, he reiterated his view in several subsequent interviews that the question of reunification was “not current”. In fact, he regards the concept of “one nation – two states” as becoming current “in the foreseeable future”. (Most recently in an interview with “Corriere della Sera” on 26 November 1989).

Fundamentally, PM Andreotti is one of the politicians who called at an early stage for the reform processes in Central and Eastern Europe to be regarded as a positive development that should be encouraged. His clear reservations regarding the German Question is thus all the more striking. However, it is not surprising if one recalls his comments in 1984, when he said “there are two German states and there should be two in the future” and warned about “pan-Germanism”. He has never retracted these comments.

Following the meeting of the European Council in Strasbourg6, PM Andreotti (“La Stampa” of 12 December 1989) spoke of the Germans’ “right – hope would be a better word” to reunification. Here, too, his inclination was to play down the German Question. Commenting on the terms “self-determination” and “German people” in the European Council Conclusions of Strasbourg, he said that he had argued for the use of the term “free expression of the people’s will”, explaining that the Germans had “not clarified” at the start of the discussion “whether they were also referring to the millions of Germans living in Russia, Poland etc.”. Although this interpretation may have served to back up his previous comments, it is not particularly well-disposed towards the Federal Republic of Germany in the light of our bilateral relations, which are otherwise characterised by trust.

In the pan-European context, Andreotti expressed his concern that the term “self-determination” could boost separatist tendencies, especially in Yugoslavia. Concern that the South Tyrol conflict could flare up may be behind these comments.

3. In contrast to PM Andreotti, other Italian politicians – including some from DC, but primarily from the Socialist Party – have commented more positively on the German Question. During his state visit to Algeria on 12 November 1989, President Cossiga7, who is himself a member of DC, expressed understanding for the “Germans’ legitimate desire for reunification”. Foreign Minister De Michelis8, Deputy PM Martelli and party head Craxi9 of the PSI, and even Partito Comunista Italiano (PCI) head Occhetto10 have expressed fundamental support for respecting the right to self-determination. On 5 December 1989, Martelli accused PM Andreotti of having his head in the sand if he regarded the German Question as not current. Foreign Minister de Michelis has expressed similar views.

4. Despite PM Andreotti’s reservations, however, the basic consensus in Italian politics regarding Central and Eastern Europe should not be forgotten.

Italy is pursuing a policy of realism and pragmatism that sees stability in Europe as the main goal. That is why it believes the German Question can only be re solved as part of a general process of bringing West and East back together. In an interview with “La Stampa” on 12 November 1989, Foreign Minister de Michelis expressed support for speeding up “vertical integration” in the EC, while continuing “horizontal integration” in Eastern European countries. He said that flexible mechanisms must be developed in order to integrate these countries step by step through association.

Upholding the Helsinki Final Act is as important to Italy as the EC aspect. The borders are fundamentally inviolable, although in an interview on 12 November 1989 de Michelis referred to the possibility of reviewing the border agreement through East-West consensus within the framework of the CSCE process. However, the Italian Government and public are concerned that the turbulent developments in the GDR and other Eastern bloc countries could cause instability in the Soviet Union and undermine Gorbachev’s position. By reacting cautiously, the West hopes to help counteract the fear in the Soviet Union that the West alone will benefit from the spectacular transformation in Central and Eastern Europe.

5. We can assume that the European Council in Strasbourg succeeded in allaying the Italian Government’s concerns in this regard. As far as Italy is concerned, the agreement that the Intergovernmental Conference will start during Italy’s Presidency in the second half of 1990 and the wording on the German Question in the conclusions mean that the German Government will be involved in the EC integration process. Even PM Andreotti declared in a statement to the press after the cabinet meeting on 15 December 1989 that he completely identifies with the European Council conclusions, which he said he had played an active role in drafting.

However, it must be noted that despite the fundamental consensus between Italy and the Federal Republic of Germany on security, West-East relations and European integration, we still have plenty of work ahead of us as regards persuading the Italians on the German Question. German unification is naturally not a key Italian interest and tends to be met with underlying reserve by some sections of the Italian public. PM Andreotti’s sceptical stance is symptomatic of this. Rome in particular is keeping a close eye on possible German leadership in the West-East process, not least because Italy has high economic hopes of its own as regards development in Eastern Europe.

Italy’s concerns about Germany should be countered by extensive information and prompt and close coordination at bilateral and European level, as was the case at the European Council in Strasbourg. Ambassador Ruth11 plans to hold talks with PM Andreotti on further developments in Germany and Europe as soon as possible. It would also be useful to continue the dialogue with Italy on further developments in Central and Eastern Europe at a high political level via an official visit by Foreign Minister Genscher12 to Rome in the spring. We should also press for the next German-Italian intergovernmental consultations to be held as soon as possible in Rome. The talks could take place in the early summer of 1990 in order to discuss this topic at the head of government level. 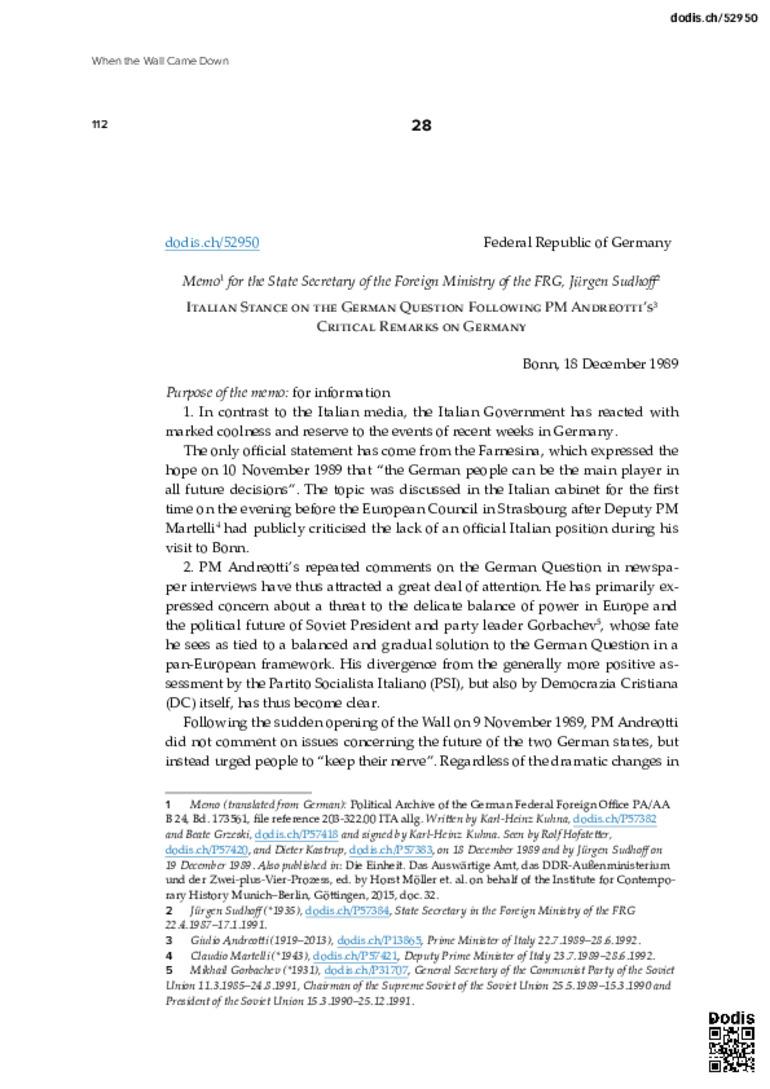 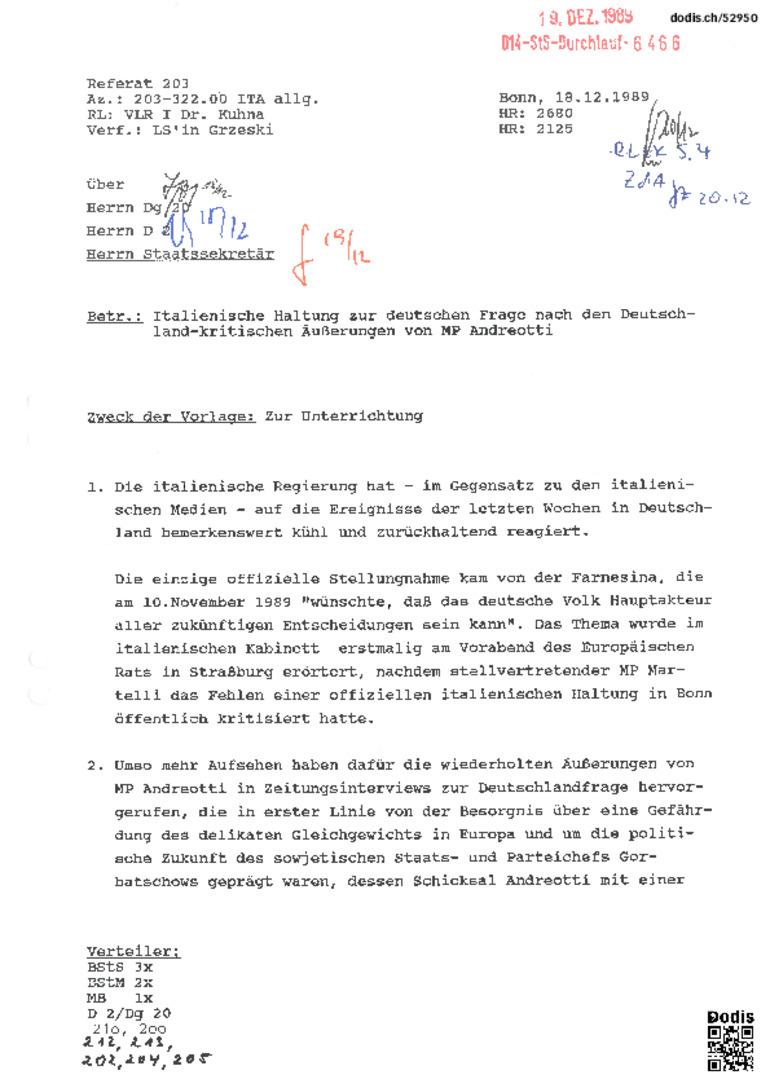 Persistent URL of this document: http://dodis.ch/52950