Language: English
No. 77. GDR: Travel to FRG and West Berlin
Telegram (T)
Description of a “historic night” of free travel between East and West Berlin.
How to cite: Copy

When the Wall Came Down. The Perception of German Reunification in International Diplomatic Documents 1989–1990 (Quaderni di Dodis 12), vol. 12, doc. 7

dodis.ch/52922 Telegram1 from the British Commandant in Berlin, Robert Corbett2, to the British Secretary of State for Foreign and Commonwealth Affairs, Douglas Hurd3

1. West Berliners initially incredulous. Emotional scenes at the Wall. Constant flow of East Berliners through the night. Most were testing the system and have returned home. Next four days could be testing.

2. At a reception at the Aspen Institute at 5.30 p.m. local yesterday, a young colleague of the governing mayor confided in Head of Chancery4 that a year ago, he took the view that the Wall would remain beyond the year 2000. Now it could be down in as little as five years, he thought. A few minutes later, the former Governing Mayor, Diepgen5, commented in a speech that what had been inconceivable a few weeks ago, might well be conceivable tomorrow.

3. Neither had any inkling that as little as two hours later, the city would begin to buzz with rumours that travel from East to West was now unrestricted.

4. Within hours of Schabowski’s6 comments, broadcast on television, hundreds of East Berliners were queuing at the sector crossing points. After some initial uncertainty, the GDR border guards began to let them through. No special documentation was being required. The guards seemed content to put a stamp in an ordinary identity card.

5. Later, crowds began to gather on the Western side. There seemed a possibility of trouble breaking out. And the Governing Mayor7 who was at a crossing point in the British sector telephoned the minister in some concern. Head of Chancery, with my chief of staff8 and two members of BMG9 public safety branch therefore made a tour of some of the key points in the early morning.

6. At 2 a.m. they found the Governing Mayor mingling with the crowds at the Invalidenstrasse crossing point. The Head of the Senat Chancellery10 was euphoric and incredulous. “A wonderful morning” he proclaimed. And he spoke emotionally of seeing two GDR guards, two West Berlin police and two members of the Royal Military Police talking together and cooperating in controlling the large crowds. A constant flow of East German Trabant cars was passing into the west of the city. They were warmly greeted by West Berlin spectators, many of whom spilled eastwards across the sector boundary without any reaction from the GDR borders guards. Indeed the guards here were beaming, visibly enjoying their new role of shepherding happy East Berliners in both directions across the crossing point. Several of the East Berliners waved palm leaves from the windows of the cars.

7. A little distance away, groups of two or three GDR soldiers could be seen by the wire. They were no doubt wondering what function they were now expected to perform.

8. I spoke to the Governing Mayor at this point and found him much more relaxed and confident that matters were under control. He was in jubilant mood.

9. The Brandenburg Gate at 3 a.m. presented an amazing scene. Some hours before, some young West Berliners had climbed on to the Wall, which is broad and flat-topped at this point. The GDR guards had turned a water jet on them. But the intervention of some people in civilian dress on the Eastern side put a stop to this. And eventually as many as 600 young people were on top of the Wall, bathed in television lights, mostly quietly enjoying the unique occasion, and occasionally shouting “the Wall must go”. Some were chipping at the Wall with hammer and chisel and distributing pieces to the crowd.

10. At Checkpoint Charlie at 4 a.m., several bare-headed GDR guards faced a friendly, jostling crowd. The ground was littered with the glass from broken bottles, and the guards sensibly closed the gates until the area could be cleared. They moved the crowd of West Berliners back to the sector boundary in a calm, gentle and skilful way.

11. Television interviews with East Berliners testified to the fact that most were spontaneously testing whether the restrictions had indeed been lifted. A common goal was the “Ku’damm”, West Berlin’s main shopping avenue. At 4.30 a.m., it was lined with East German registered Trabants. And on the pavements, throngs of East and West Berliners mixed and greeted each other with obvious emotion.

12. Though some of last night’s visitors had proceeded to Marienfelde refugee camp, most seem to have gone back. The Senat met in an emergency session last night and the Governing Mayor appeared on television to urge East Berliners not (not) to visit West Berlin immediately, but to spread their visits over the next few days. Allied ministers will meet with the head of the Senat Chancellery at 11.30 a.m. (local) and will have to consider requests for help. The Allied kommandatura11 will convene this afternoon.

13. We stimulated the Americans (who are in the chair) into producing an Allied statement welcoming this historical step. Text will follow.

14. This morning at 8.30 local an estimated 3000 East Berliners were waiting at the Invalidenstrasse crossing point. The GDR authorities have made clear that proper documentation will be required. We have seen no sign of any difficulties at the crossing points so far. The atmosphere on both sides remains friendly and cooperative.

11
The governing body for the city of Berlin following Germany’s defeat in the Second World War, comprising representatives of the USA, USSR, UK and France.↩ 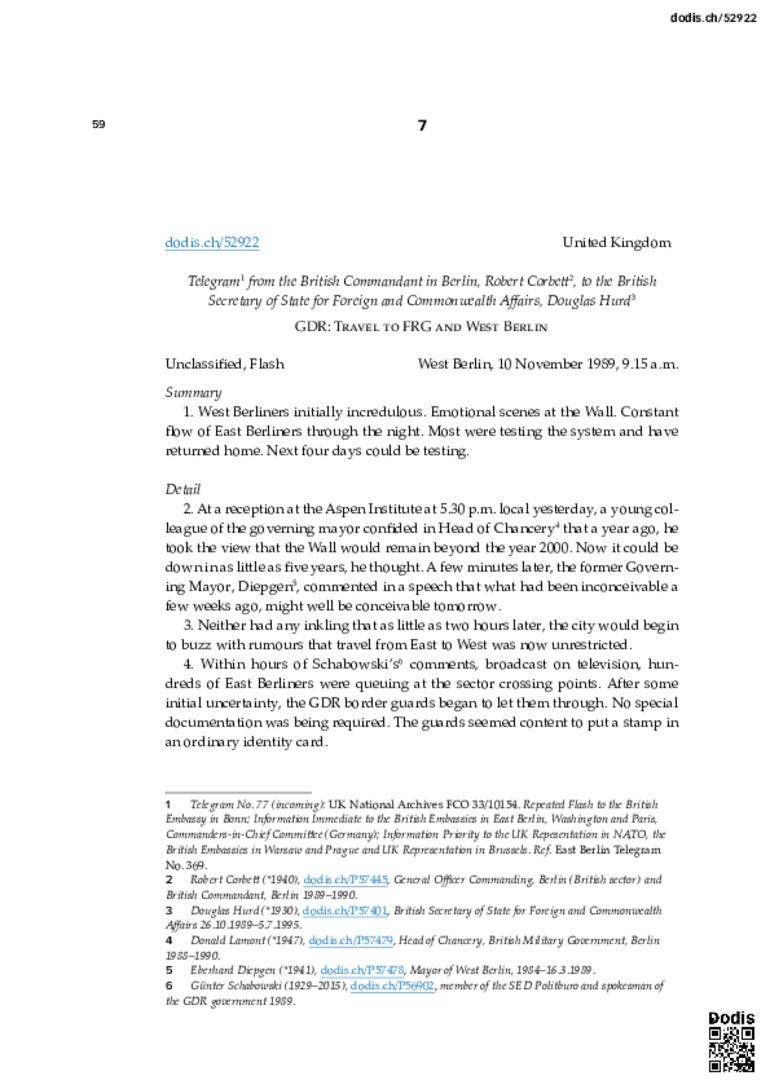 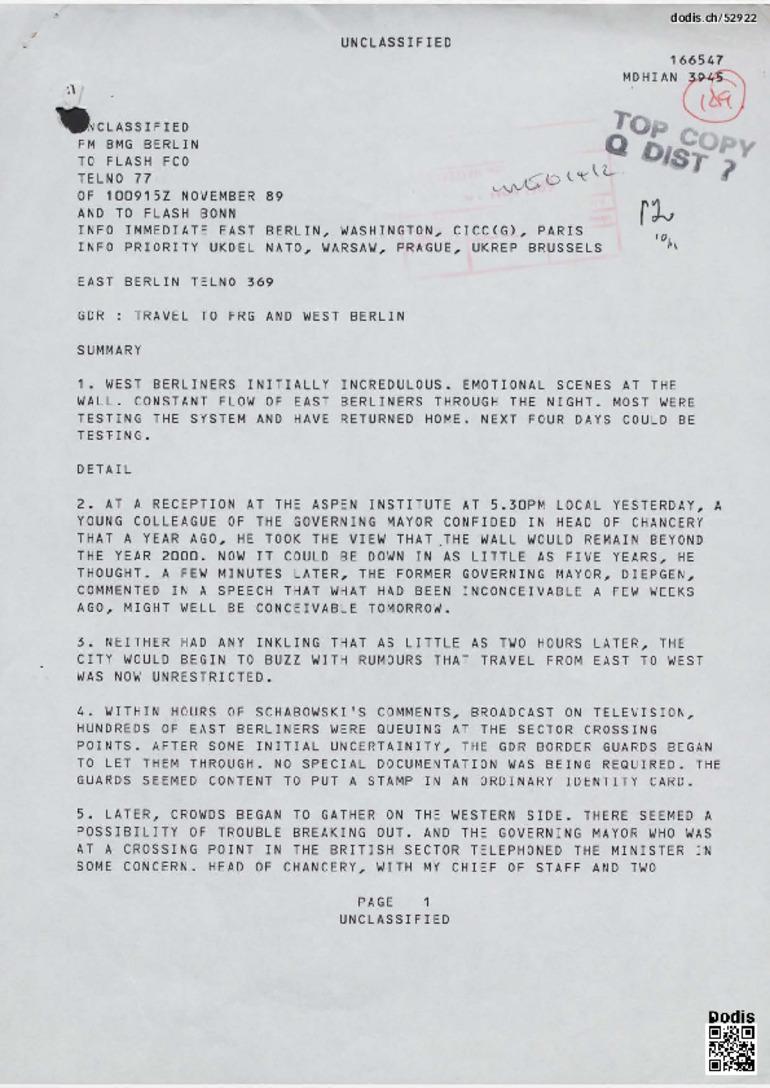 Persistent URL of this document: http://dodis.ch/52922