Language: English
Telephone Conversation with Helmut Kohl, Chancellor - Federal Republic of Germany
Minutes (PV) • confidential
During the telephone call with President Bush, Chancellor Kohl reported on his trip to Poland and the situation in East Germany after the Berlin Wall was first breached the previous day.
How to cite: Copy

When the Wall Came Down. The Perception of German Reunification in International Diplomatic Documents 1989–1990 (Quaderni di Dodis 12), vol. 12, doc. 8

Chancellor Kohl: The reforms in Poland are moving ahead. They have a new government with fine people. They are too idealistic with too little professionalism. Many of their professionals have spent the last couple of years in prison, not a place where one can learn how to govern. They are committed to democracy and market economics; we must help them. My request is as follows.

I just told Margaret Thatcher4 and will tell Mitterrand5 tomorrow that we should give instructions to our representatives at the IMF that the negotiations with Poland should be completed speedily. These negotiations are not nice for the Poles but they are aware of the need and they seek clarity and clear cut conditions. We should help to get an agreement completed by the end of November. So I ask you, help us. Go and do this in the interest of the people. With respect to the rest of my trip to Poland, I will tell you next week after I return. Do you have any questions on Poland.

The President6: I have no questions; I’ll be interested to hear from you next week. I’m very interested in the GDR.

Kohl: I’ve just arrived from Berlin. It is like witnessing an enormous fair. It has the atmosphere of a festival. The frontiers are absolutely open. At certain points they are literally taking down the Wall and building new checkpoints. At Checkpoint Charlie, thousands of people are crossing both ways. There are many young people who are coming over for a visit and enjoying our open way of life. I expect they will go home tonight. I would cautiously tell you that it appears that the opening has not led to a dramatic increase in the movement of refugees. It may be with the frontier open, people will simply go back and forth, looking, visiting and going home. This will work only if the GDR really reforms and I have my doubts. Krenz7 will carry out reforms but I think there are limits. One of those limits seems to be one party rule, and this simply will not work. Certainly, in particular, it will not work without pluralism, free trade unions and so forth. I could imagine that this will continue for a few weeks – that for a few weeks people will wait to see if the reforms come and if there is no light at the end of the tunnel they will run away from the GDR in great numbers. This would be a catastrophe for economic development; good people are leaving. The figures this year – 230,000 have come. Their average age has been between 25 and 30. This is a catastrophe for the GDR. They are doctors, lawyers, specialists who cannot be replaced. They can earn more here. This is a dramatic thing; an historic hour. Let me repeat. There were two major manifestations (political gatherings) in Berlin. One was in front of the Berlin Town Hall where there were a lot of left wing rowdies, these are the pictures that will be shown on TV around the world. The second was at the Kurfurstendamm organized by our political friends. It was at about· 6:30PM and the estimates are that there were 120,000–200,000 people. The overall spirit was optimistic and friendly. When I thanked the Americans for their role in all of this, there was much applause. Without the US this day would not have been possible. Tell your people that. The GDR people in the protests and demonstrations have been sincere, not aggressive. This makes it very impressive. There have been no conflicts, even though in East Berlin, Leipzig and Dresden hundreds of thousands have been in the streets. I hope they will continue to be calm and peaceful. This is my short report.

The President: First, let me say how great is our respect for the way the FRG has handled all of this. Second, my meeting with Gorbachev8 in early December has become even more important. I want to be sure you and I spend enough time on the telephone so I have the full benefit of your thinking before I meet with him.

Kohl: We should do that. It’s important.

The President: I will call Brady9 today or tomorrow to tell him of your suggestion for a rapid completion of the IMF agreement on Poland. Fourth, I want to see our people continue to avoid especially hot rhetoric that might by mistake cause a problem.

Kohl: That’s very good of you.

The President: Fifth, I want to tell the US press of our talk, that you gave me a thorough briefing, that you did publicly acknowledge the role of the US, and that you and I agreed to talk later next week.

Kohl: Thank you. Give my best to Barbara10.

The President: I’m in Dallas. Same to Hanalore11.

Kohl: Thank you and kind regards. Tell her to save her money that I intend to send sausages for Christmas. 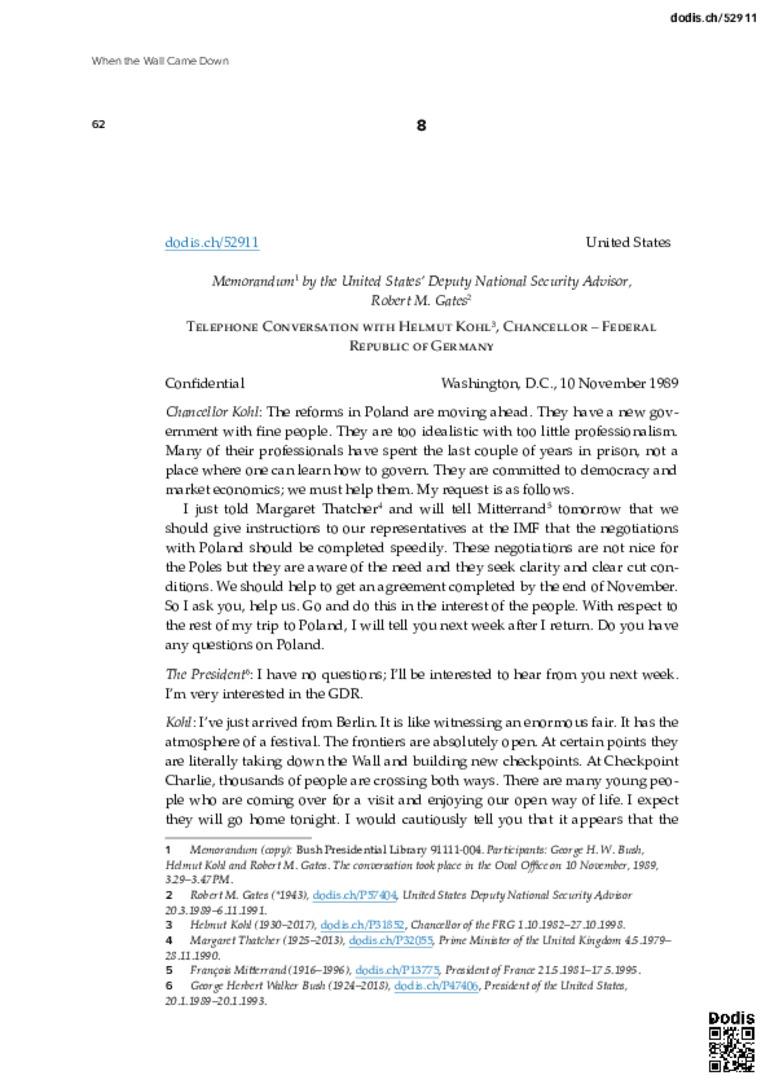 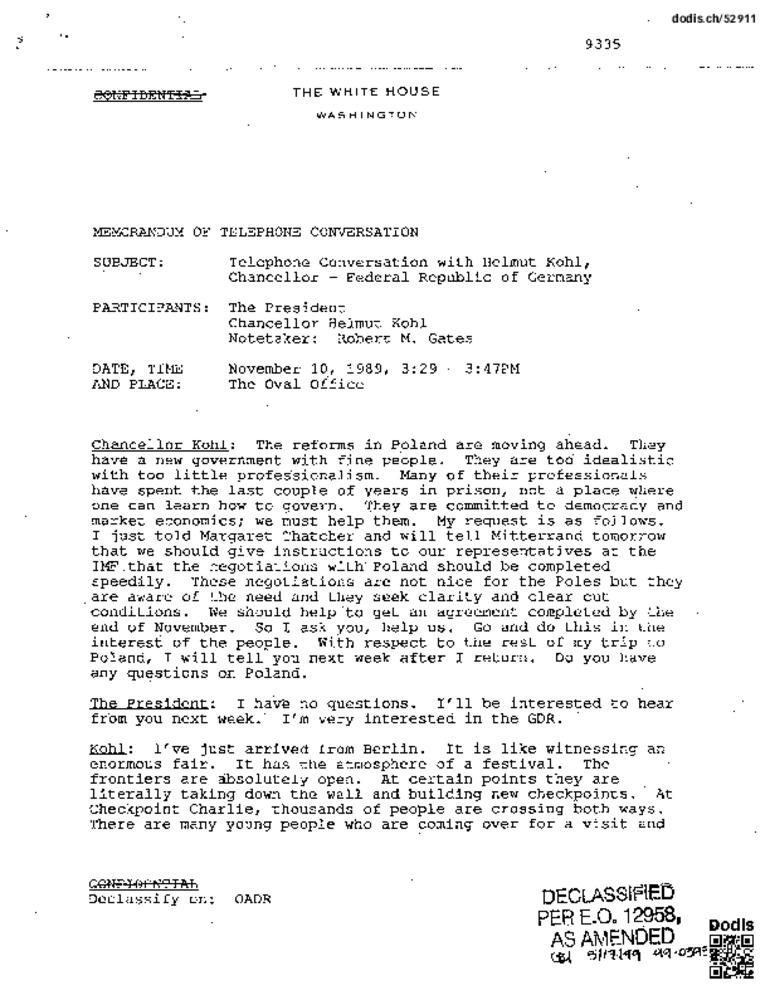 Persistent URL of this document: http://dodis.ch/52911