dodis.ch/44100  Memorandum from the Secretary General of the League of Red Cross Societies, W. Rappard, to the US Chief Deputy at the Paris Peace Conference, E. M. House1

Switzerland has repeatedly made known the reasons why the maintenance of her military neutrality, which has been a matter of vital importance to her in the past, would still remain so in the future, if, as she ardently hopes, circumstances may allow her to join the League of Nations.

The Swiss Government has presented its case in its Memorandum of February 8th 19192.

All signs show that its views on this point are shared by a large majority of the Swiss people whose opinion, expressed in a constitutional referendum, will decide on Switzerland’s entry into the League.

A recent confidential statement made by Colonel House led the Swiss Government to believe that its peculiar position could be considered in a reservation made at the time it declared its accession to the Covenant. It now appears that such a special reservation is not admissible.

Another means of meeting the very grave difficulty which thus confronts all those who would regret to see Switzerland remain outside the League is suggested by the revised text of the Covenant. Colonel House was good enough to show the Swiss representatives the new article XXI3 relative to the validity of previous international engagements. The wording of this article is so exactly adapted to Switzerland’s case that it would almost seem to imply an allusion to it.

The neutrality of Switzerland has for the last four centuries been regarded and respected by the Swiss people as being the best safeguard against external aggression and internal disruption. In 1815 the Powers, at the request of Switzerland, recognizing this ancient institution to be in the true interests of Europe, solemnly made it a part of European policy and public law and guaranteed the inviolability of Swiss territory. Is there in the whole realm of world politics a better example of «an international engagement and a regional understanding for securing the maintenance of peace» and one which has proved more effective in the course of modern history?

The Swiss Government would be very happy to receive the positive and specific confirmation, that, as stated in article XXI, nothing in the present Covenant shall be deemed to affect the validity of the Swiss military neutrality, this international engagement and regional understanding preeminently designed for the purpose of securing the maintenance of the Peace of Switzerland and of her European neighbours.

If such an assurance is given, the Swiss Government could declare its accession to the League of Nations without any other reservation. If not, it is greatly to be feared that the Swiss people, faithful to the pledges given and taken in 1815, will not feel free to join the League of Nations, to whose fundamental principles no people are more than they wholeheartedly and enthusiastically devoted.

They are quite prepared to assume their full share of risk in the great undertaking. They are ready to join in economic measures against any covenant breaking state and to devote their entire military resources to the defence of their peculiarly exposed territory.

They highly appreciate the great honor and the grave responsibility of having the seat of the League of Nations on their soil, which is already the home of the International Red Cross and of many other international institutions.

They have always and will ever make every sacrifice to protect it against the horrors and passions of war. They will owe it to the League to do so in a special measure, if hostilities ever should break out among Switzerland’s neighbours in which the League itself took no part. The necessary inviolability of the Seat in this case would be the more effectually secured, if all prospective belligerents know once [and] for all that they could in all events rely on the permanent military neutrality of Switzerland as a certain factor in the strategical situation of central Europe. 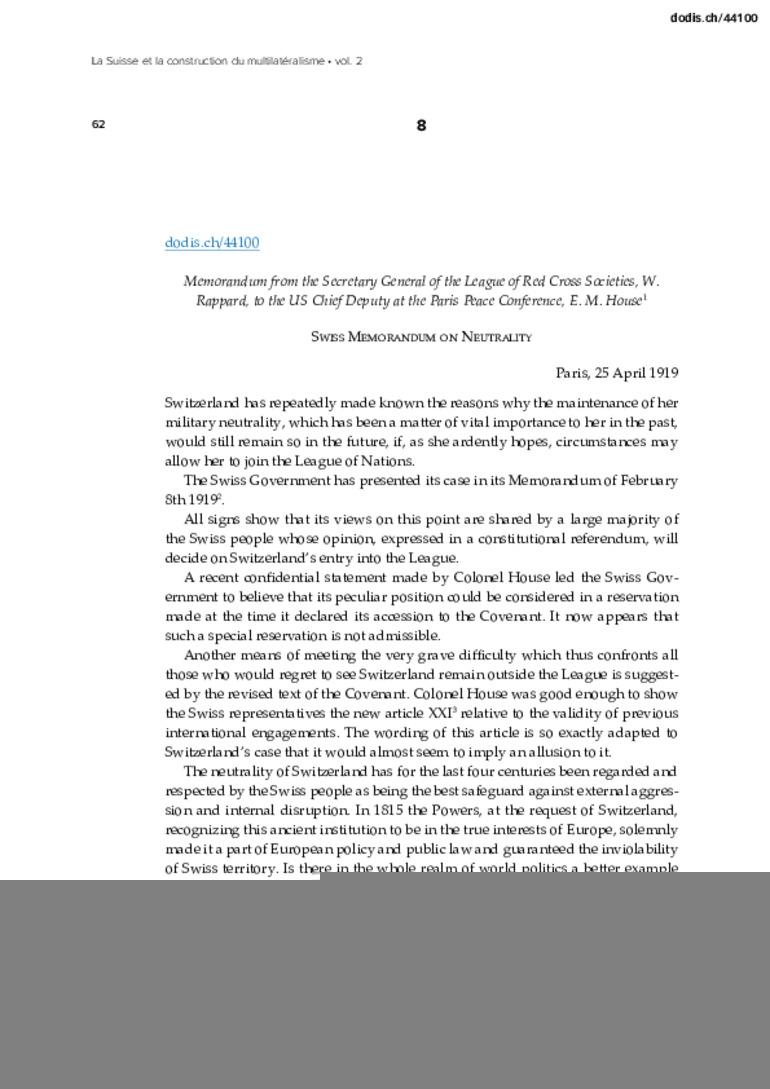 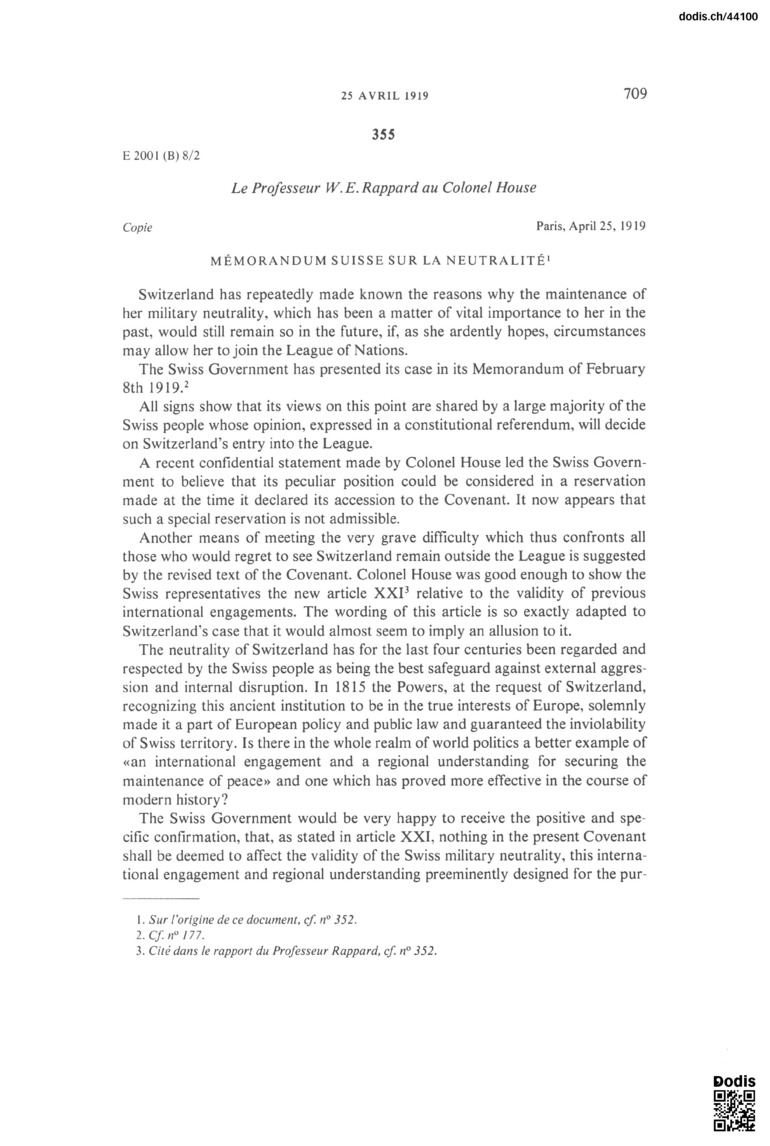 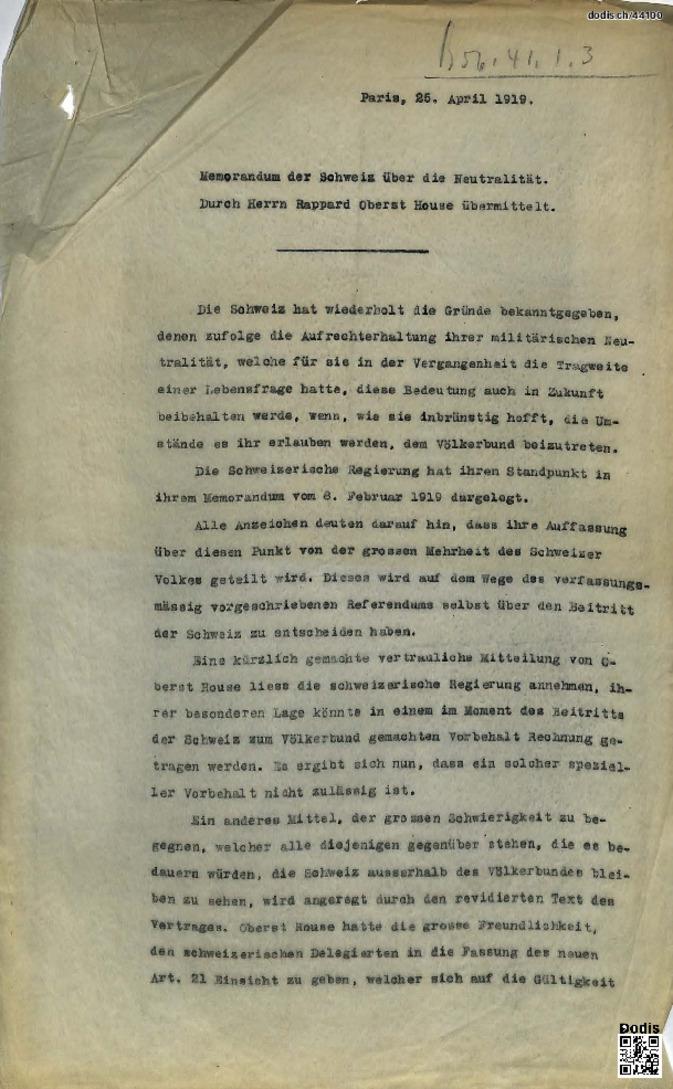 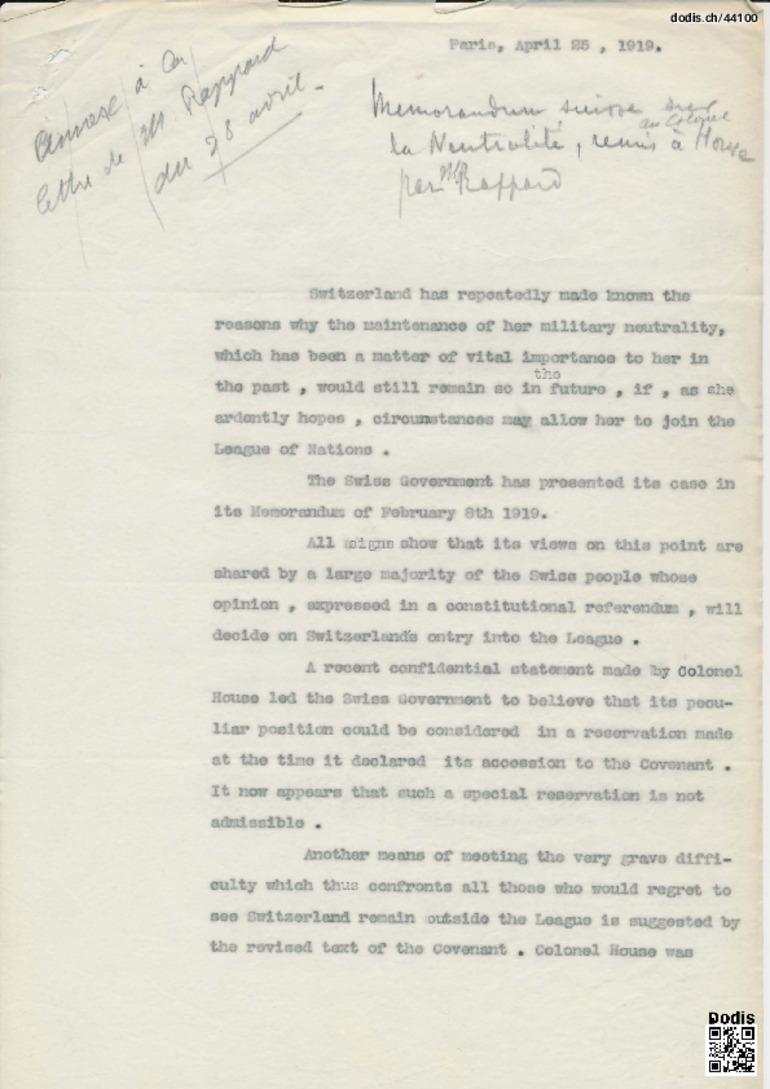 Persistent URL of this document: http://dodis.ch/44100