Language: English
Letter (L)
Even though it is still an option for various governments that the seat of the League of Nation should be transferred away from Geneva, W. Rappard is confident that the Assembly will decide in Switzerland’s favor and let the seat remain in Geneva.
How to cite: Copy

dodis.ch/54145  The Secretary General of the League of Red Cross Societies, W. Rappard, to the US Chief Deputy at the Paris Peace Conference, E. M. House1

Your letter of June 20th 2 written on board the Lapland, has just reached me and I hasten to reply. As you do not mention any addresses, I take it for granted that I may get in touch with you, thanks to the kindness of the American Embassy.

I am deeply grateful to you for the continued interest you are good enough to show in the question of the seat of the League of Nations. We have naturally all shared your concern about the movement for substituting Brussels or some other place for Geneva, but I have the impression that the most critical moment in the discussion is now over. This is, briefly stated, the situation as I see it:

The Belgians have naturally not been able to get over their disappointment, but on the whole I have reason to believe that the real and most effective influences that are still working against Geneva emanate from Paris rather than from Brussels. The French Government has repeatedly assured ours that it did not intend to suggest a change in the provisions of the Covenant, but our mutual experiences in Paris have made us very cautious in this respect. I think, therefore, that we will always have to count on the hidden but none the less very persistent opposition of France.

The Italian Government seems sincerely favorable to Geneva, which the general opposition to France and geographical considerations combine in making entirely plausible. As for the other Governments, I believe that they view the matter with comparative indifference. Our friend, Lord Robert Cecil is more convinced than ever that Geneva should be the seat of the League. In fact he told me a fortnight ago, that, in view of all the reasons which seemed to favor Geneva a year ago, he thought that today the matter should not even be raised in as much as it would imply something like a «breach of faith» towards the Swiss people who had devoted on the assumption that they would have the seat of the League of Nations. As you know however, Cecil is no longer a member of the Government and is in fact perhaps its most dangerous foe. From all I can gather, Balfour is [mildly] in favor of Geneva, but does not seem ready to fight for it if a serious conflict should arise over the question. As for the Prime Minister, I do not believe that he has ever expressed an opinion on the question.

In the Secretariat of the League of Nations, the opinions are very much divided. The majority of the directors favor Geneva. The small but very influential group of Frenchmen however who surround Monnet, are extremely active in favor of Brussels. Their alleged reasons are the following:

1. Since the withdrawal of the United States, the real political basis of the League of Nations is in London and in Paris. In as much as neither of these capitals can be the permanent seat of the League, Brussels being situated on the summit of the triangle of which the line London-Paris is the base, would be the most convenient stop. As all the Governments are but too inclined to forget the League of Nations altogether, it is well to make it as convenient for them as possible to confer with its officials. Therefore, it is in the interest of the League to settle there where meetings can most easily be arranged.

2. The League of Nations must, at any cost, avoid losing touch with the Governments, Brussels, being a capital and having several rather important embassies and legations, is more favorable than Geneva in the matter of official communication.

These are the two main reasons put forward very frankly by Monnet, Mantoux and Comert of the Secretariat. I have no cause to doubt their sincerity, but I believe that, more or less unconsciously perhaps, these gentlemen are defending the point of view of their Government by reasons which are not the true ones. I am personally convinced that Monsieur Léon Bourgeois, in spite of all polite assurances, is behind the French delegation of the Secretariat.

As for Sir Eric Drummond, I have every reason to believe that he really wishes to come to Geneva. However, he is very strongly under the influence of the French and particularly of Monnet who rather terrorizes him by repeating that the Secretariat would be quite lost of sight if it decided to settle in the remote spot at the end of the Lake of Geneva. Drummond, as you know, is extremely cautious and desirous of avoiding any conflict. He told me recently that he was but awaiting the decision of the Assembly to move to Geneva. He has not wished to come before as he did not feel assured of the support of the Council and as he is concerned over the financial support which the Governments are very slow in lending the Secretariat. As far as I can judge, a vote taken at present in the Assembly would strongly favor Geneva and I am therefore not over anxious about the final outcome.

It is obvious that the Swiss and the Geneva Governments will do all in their power to facilitate the moving of the seat to Geneva. In as much as they were assured, that the coming of the League would entail no financial consequences for them and as public opinion in Switzerland has rather been brought to believe so in the course of the very heated popular campaign, the authorities are obviously anxious to avoid making any positive financial offer unless and until it should become clear that it was absolutely necessary in order to attract the seat toGeneva.

Thanking you again very warmly for your letter and hoping to have the great privilege of seeing you soon here in Geneva or at any other place that might better suit your convenience, I am, dear Colonel House, yours very sincerely, Wm. R. Rappard, Secretary General. 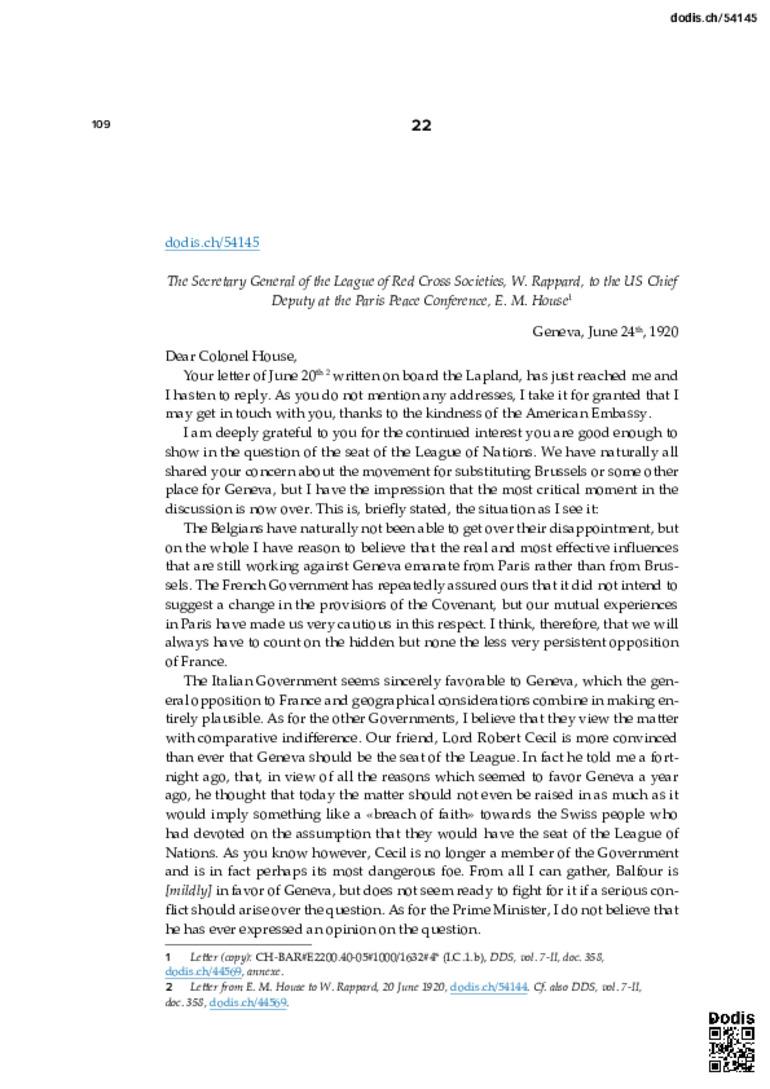 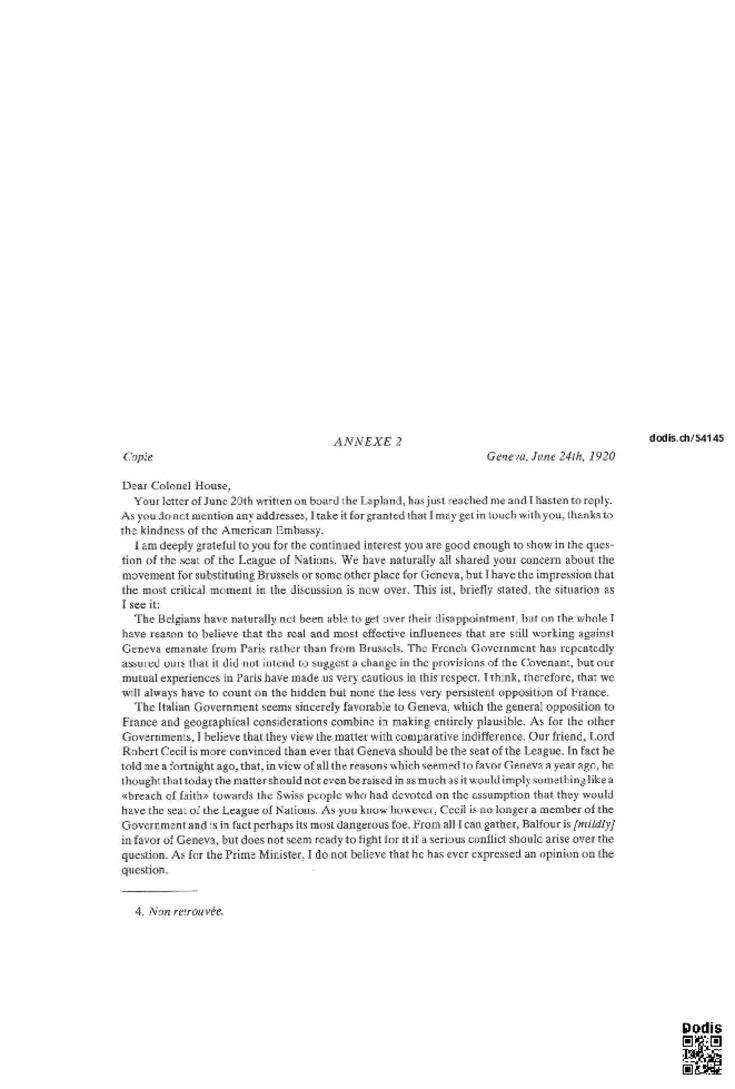 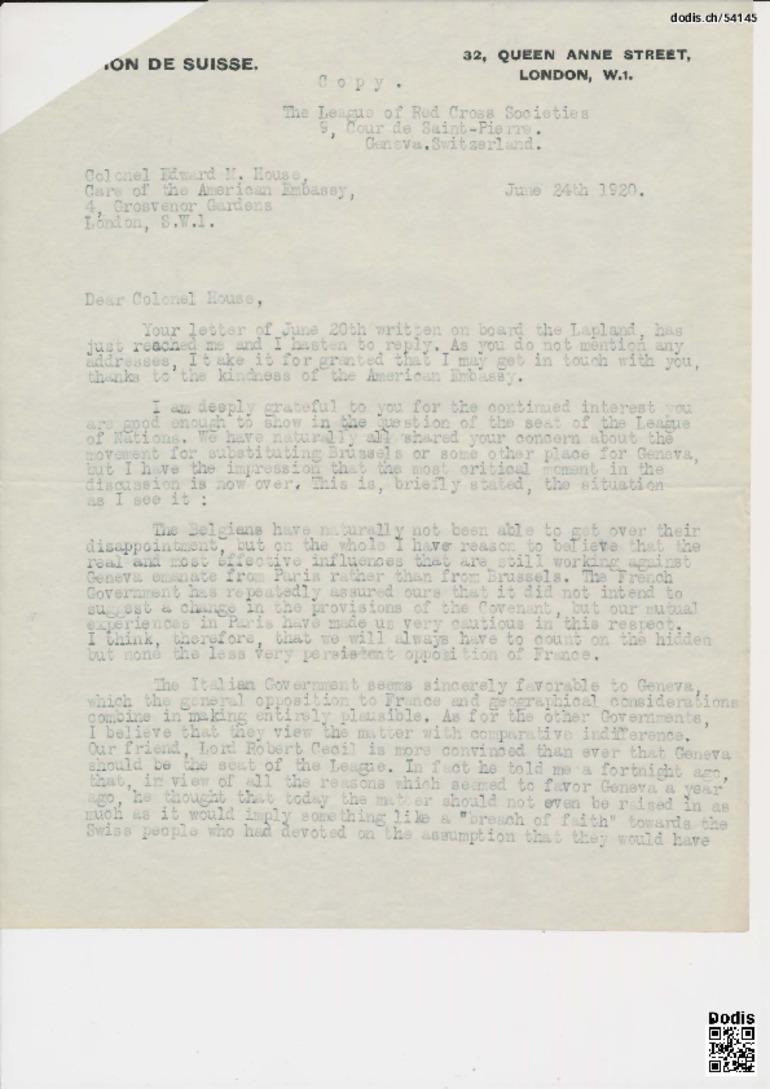 Persistent URL of this document: http://dodis.ch/54145