Language: English
No. IFB0032. Two Plus Four Equals What for Canada?
Telegram (T) • secret
Expressions of concerns that the Two Plus Four deal will squeeze Canada out of discussions about the future of Europe, notwithstanding the historic presence of Canadian forces in West Germany.
How to cite: Copy

When the Wall Came Down. The Perception of German Reunification in International Diplomatic Documents 1989–1990 (Quaderni di Dodis 12), vol. 12, doc. 41

dodis.ch/52940 Telegram1 from the Canadian Department of External Affairs to the Canadian Embassy in Washington

Two Plus Four Equals What for Canada?

You will by now have seen letter to Baker2 from SSEA3 which sets out another formulation of our concerns on page two. In effect, we are looking for a good interplay of close bilateral consultations and effective discussion in NAC in Brussels. British thinking sees NATO discussion as being very important. Stumbling block is probably Genscher4. Today PM5 spoke with Kohl6 (RGB7 is sending separately PCO8 prepared statement for House of Commons9 reflecting on conversation) who stressed he was very conscious of his NATO colleagues concerns.

2. Senior USA personnel with whom we spoke here last week, including Seitz10, placed heaviest emphasis in creation of Two plus Four on overriding need to decompress situation for USSR. It is political need of USSR to show inside USSR they are, as USA put it, participants in unification process as it affects USSR interests and not its victims. The substantive point is that no one does really know how things will turn out a year from now in Germany, where public opinion is volatile. This probably accounts for some of reluctance you note in para 5 your telegram11 to establish fixed game plans. In circumstances, all acknowledge that any assets contributing to confidence and stability need to be sustained.

3. Canadian military presence in FRG is expensive and increasingly and rightly subject to skeptical scrutiny from cost point of view. We are told by many in West (and East) that Canada’s presence is valued politically. If so, this needs political reflection in consultative will, USA in particular should acknowledge Canada’s presence as significant.

4. Obviously changes will come in role of NATO, as well as in NATO comprehensive strategy. We are looking at possibilities regarding institutional evolution with more than open mind; we believe we shall have serious contribution to make. Baker ref to CSCE in his letter to Woerner12 and Clark and others is important sign of increasing USA thought being given in Washington DC to CSCE (Seitz had commented to us here that USA acknowledges it has repeatedly “been a month or so behind everyone else” on evolving role of CSCE and would correct this tendency) and a welcome invitation to discuss CSCE organization and future effectiveness, both in NATO and bilaterally, which we shall take up.

5. As to actual NATO force deployment, and comprehensive strategy, and Canadian place in ref to them, full range of possibilities also obviously exists, and nothing is pre-ordained. Defence review will look at these.

6. In sum, your points A-D in para 6 are all sound. As to wise men idea, it is good one. Another idea possible complementary, would be to get back to ministers only no holds barred NATO discussions a la Sapiniere. In addition, UK High Commissioner13 here tells us they are mulling over proposing revival of a buddy system to radiate content of Two plus Four outward to others in NATO. We do not think we would like that, preferring close bilateral consultative relationships with all of five as SSEA letters propose. But fact that we are other North American force presence in Germany would indicate that if there were a basis to be buddies on an issue, this would be basis on naturally close consultative relationship with USA. 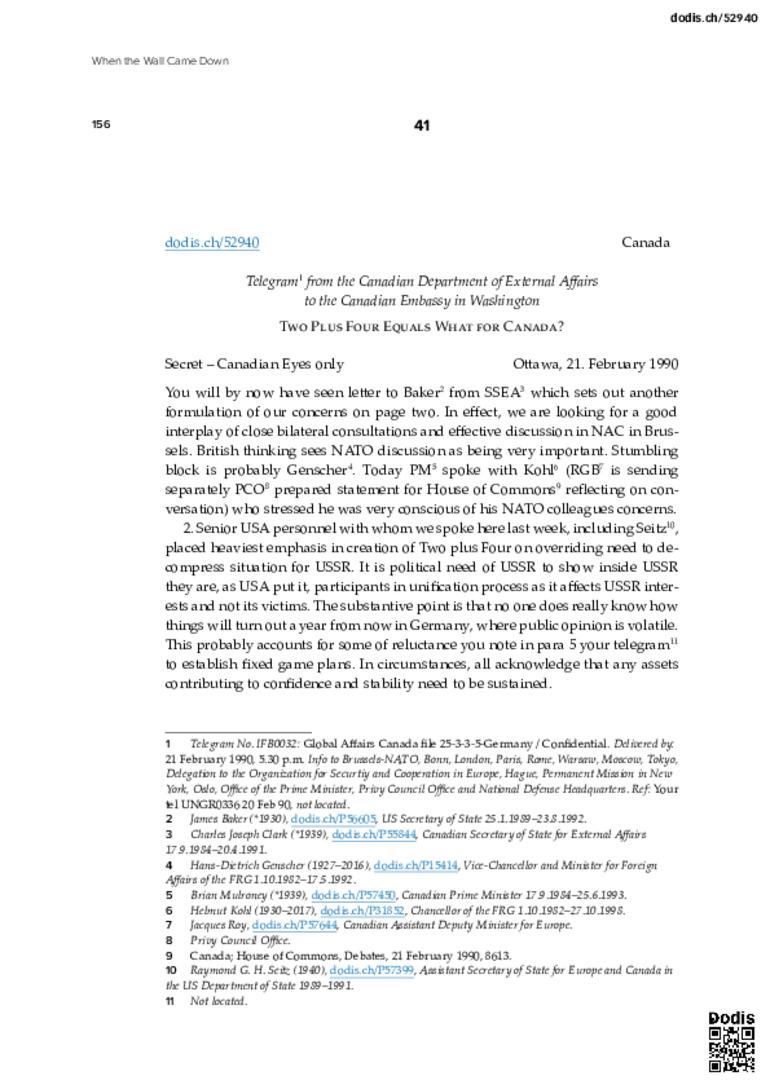 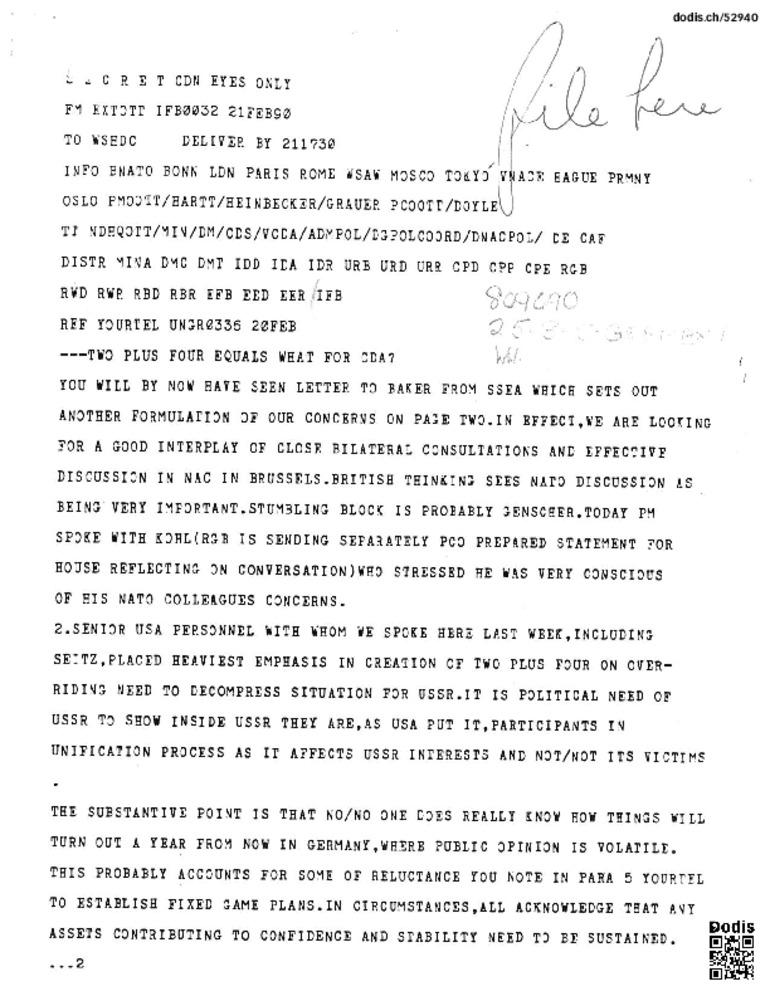 Persistent URL of this document: http://dodis.ch/52940